Gdańsk mayor Paweł Adamowicz of the Civil Platform (or PO) opposition party died after being stabbed in the heart by a deranged assailant at a charity concert on Sunday, who deceived security in order to get onstage and then give a crazed rant after the attack attempting to justify his crime on the alleged grounds that the mayor’s party wrongly imprisoned him.

All of Poland is mourning Adamowicz’s death and even his political rivals made speeches denouncing his assassination, but there are already some voices that are trying to make this into a partisan issue in order to score points ahead of this May’s European Parliamentary elections and besmirch the credibility of the ruling Law & Justice Party (also known by its Polish abbreviation as PiS).

The Washington Post published a provocative piece titled “Polish mayor and opposition leader dies after a stabbing, prompting fears of further divisions”, which advances the narrative that the rhetoric being espoused by some members of the ruling party and their supporters contributed to this tragedy.

This is almost the exact same storyline that the US Mainstream Media promotes whenever a mentally ill American goes on a killing spree and any faint trace of a political motive could be found or manufactured. It’s probably not a coincidence that the Washington Post’s political victim of this innuendo-filled smear piece is a party allied to Trump, with whom the outlet’s owner Jeff Bezos is in a heated ideological rivalry and who his paper never tires of attacking. 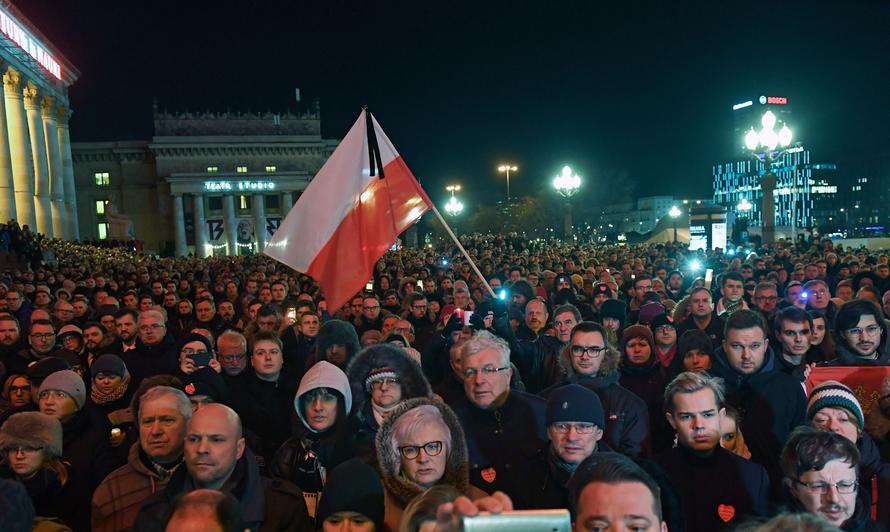 People in Poland are gathering for solemn vigils to honor Gdansk Mayor, 53-year-old Pawel Adamowicz. who died Monday after being stabbed at a fundraising event the night before.

PiS’ “grey cardinal” Jaroslaw Kaczynski also just entered into a EuroRealist alliance with Italy’s Salvini that threatens to politically shake up the EU if they and their allies come out on top in this May’s European Parliamentary elections, so they and Trump’s enemies have a motivation to try to discredit them ahead of the vote by implying that the Polish ruling party’s rhetoric and that of their supporters played a role in Adamowicz’s assassination.

It’s regrettable that the American style of unprincipled partisan politics is now being imposed on Poland and it says a lot about the unethical means to which some of the opposition’s proponents will go in order to undermine their rivals, making Adamowicz’s assassination a dark moment in Polish history for more reasons than one.