Submitted by Simon Black of SovereignMan 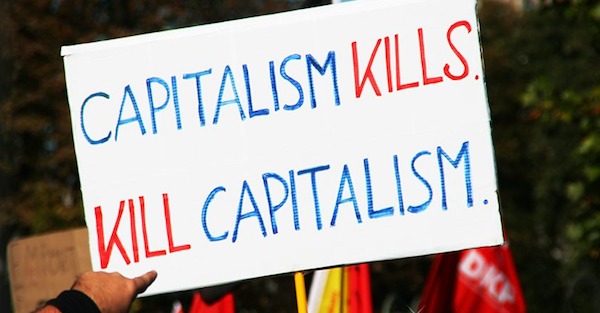 Howard Marks is one of the smartest, wealthiest investors in the world.

As founder of Oaktree Capital, Marks manages around $120 billion. And his track record ranks him among the greatest investors in history.

So it’s probably no surprise that Marks is deeply concerned about “the rising tide of anti-capitalism,” and dedicated one of his famous memos to this new political trend.

In the eyes of anti-capitalists, wealthy people, big businesses, and investment funds are all evil. Period.

Just look at how New York City pushed Amazon to walk away from its multi-billion dollar expansion there: these anti-capitalists aren’t rational. This is no longer a political agenda. They’re waging a holy war… it’s a bizarre jihad against prosperity.

As Howard Marks writes in his latest memo, the anti-capitalist fever is spreading quickly today because so many people are feeling left behind. The stock market has been booming for most of the past decade—so people in the upper middle class, and the rich, have become wealthier as a result.

People in the working class, however, rarely invest in the stock market. Instead, they have seen stagnating wages that in many cases haven’t even kept up with inflation. Nearly 30% of American jobs, primarily those in the working class, now require expensive, bureaucratic government licenses that take even more time and money away from people who are already struggling.

At the same time, economic growth is slowing and automation and globalization are eliminating working-class jobs. In a short time, entire working class professions will be vanquished. All of this contributes to a ‘have/have not’ society that has become almost a caste system: if you’re born poor, you’re probably going to die poor. Opportunities for growth and advancement are dwindling.

If you’re working class and try desperately to save money, you won’t even be able to generate a positive return (after adjusting for inflation and taxes) by keeping money in a savings account. And if you try to start a business to get ahead, you’ll once again be hit with endless bureaucracy, fees, and legal liability. Unsurprisingly this has led to a lot of anger. People feel like they’re being screwed by the system. And right now it’s palpable.

Yet rather than focus on intelligent ways to fix enormous problems, the government will align itself with the Socialist jihad and start attacking prosperity.

Look at Social Security as an example (which Howard Marks also agrees will fail). There are realistically only two ways to fix this:

Option 1 is political suicide. Option 2 is much easier, especially if you can ratchet up tax rates on the wealthy.

But there’s an even bigger insult with this Socialist Jihad: they not only want to shake down the upper and upper-middle classes with punitive tax rates of 70% to 80%, but they also want to constantly shame and demean you as well.

In ancient Rome, wealthy people were often heavily taxed and expected to pay for enormous public works. But they were honored for it… heralded with gratitude for contributing so much to the Republic.

The socialists want your money AND your self-esteem; some days it seems like there’s no end to the rancid emotional diarrhea on social media over someone else’s personal wealth.

Every action has consequences. And it’s only reasonable to presume tha t every person has a limit. Push people too far and they’ll leave. That’s what the jihadists fail to realize: it’s the 21st century. People (and capital) are mobile.

As we’ve noted before, the rich are already leaving higher-tax states for places like Texas and Florida where there’s no state income tax. That trend will only accelerate. It’s also clear that more people will relocate to Puerto Rico, where they can entirely eliminate their US federal income tax. Under tax incentive programs that I have written about before, in Puerto Rico it’s possible to pay just 4% on business income, and absolutely NOTHING on investment income.

Puerto Rico’s Secretary of Economic Development told us recently that applications for these incentives are up several fold over the past few years. So it seems that trend is growing as well. John Paulson, another hedge fund billionaire, has already said that he’s planning on moving to Puerto Rico just as soon as his youngest child goes off to college in a few years.

But that’s fine with the socialists. They think it’s a victory when they chase people and businesses away.

They’re not interested in a win/win solution that benefits everyone. They only want a win/lose outcome… “winning” at your expense.

Two thousand years of historical evidence show this doesn’t work. As Marks writes in his memo:

“The hard-left thinks government can do things better than free markets and increase wellbeing.  Which government agencies would you like to see managing our economic engine?

“Capitalism is an imperfect economic system, because differential performance in the pursuit of economic success – as well as luck – results in there being (a) some people who are less successful as well as some who are more and (b) a few who are glaringly successful.

“Obviously I’m someone who has profited from capitalism, so my views could be dismissed as hopelessly biased.

“However, I’m 100% convinced that the capitalist system has produced the most aggregate gains for our society, exceptional overall progress, and a better life for most.  For me, the best assessment of capitalism is the one Winston Churchill applied to democracy:

In the same way, I’m convinced that capitalism is the worst economic system . . . except for all the rest.”