In the previous BTC-USD market analysis, we discussed a macro pattern forming, called a “symmetrical triangle.” A symmetrical triangle (shown in red) is a directionally agnostic consolidation pattern. Until this weekend, the market hadn’t decided whether it was going to break up or break down out of the pattern. Over the weekend, the bitcoin market saw a very strong push on very high volume through the bottom support of the triangle: 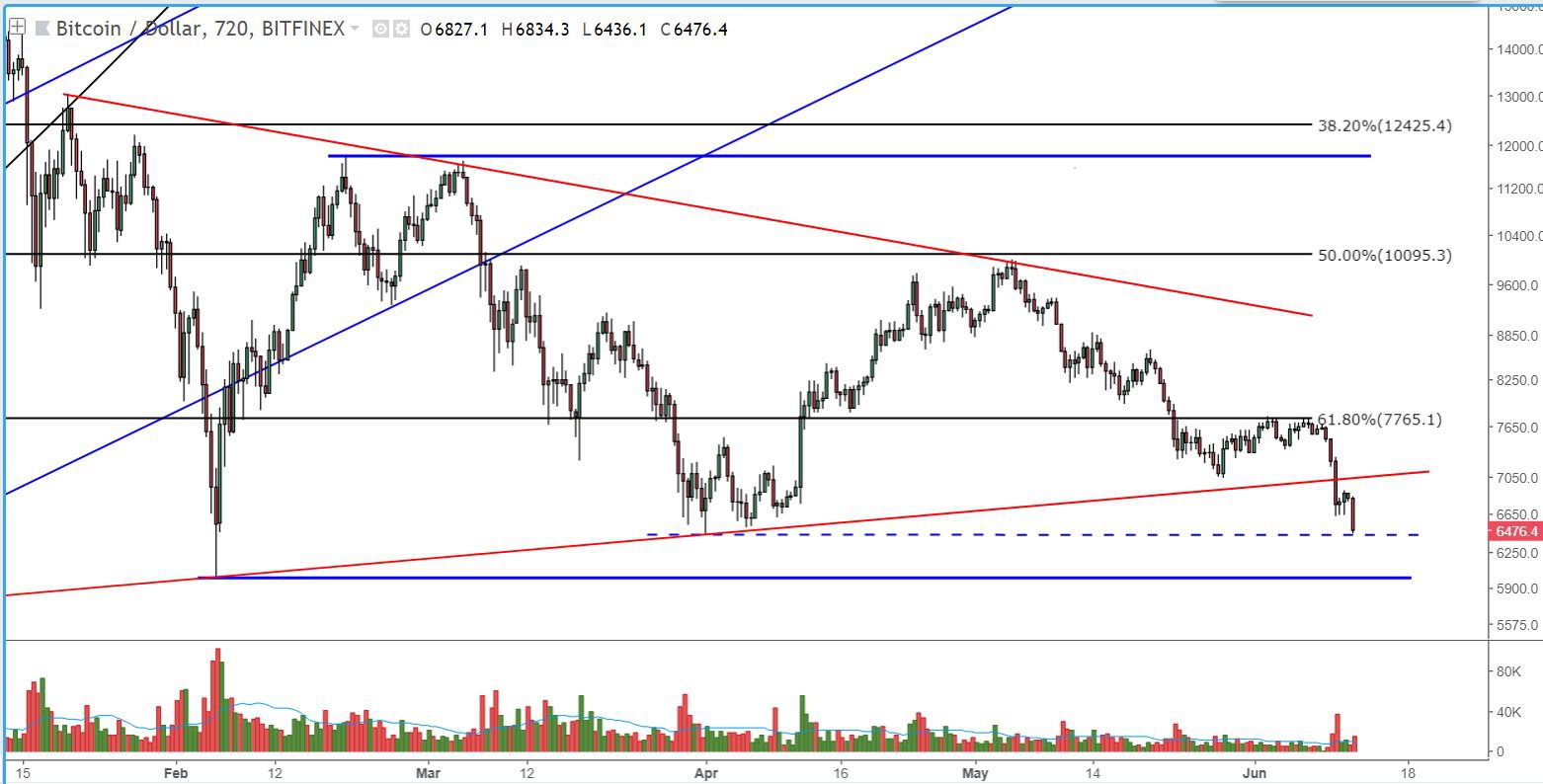 The implications of this consolidation pattern breaking down have potentially devastating ramifications for the crypto market across the board. With patterns like a symmetrical triangle, there is a measured move that will give insight into a potential price target that will play out upon the breakout. In our case the measured move is a staggering $5,500 move. If the triangle had broken to the top, we could have expected to see a $5,500 move to the top. However, since we broke to the bottom of this pattern, we could potentially be heading for prices ranging from $1,500 – $3,000. Whether that target becomes fully realized remains to be seen, but those prices are not out of the question.

When we look at current support levels that may impede the downward motion, a few tests need to be broken before the full-fledged bearish pressure really begins to manifest in the market.

Our previous low at $6,450 was the lower boundary of an accumulation trading range that caused the market to make a very sizeable rally, testing the $10,000 range. Breaking this price level would undoubtedly send a cascade of stop-market orders, as this is a line-in-the-sand-type of price level: It’s where the bears previously decided they would no longer sell below that range and where the bulls decided it was a good entry point for long positions.

If the $6,450 price levels fail to hold up the market, the next immediate test will be the v-bottom we saw back in February that tested the lower $6,000s. There was a very high level of buyer interest at that level, and it was a level where aggressive short sellers covered and caused a rally. If we manage to break that level, we enter a high likelihood of deeper tests of market support where we will need to zoom out even further on our market view: 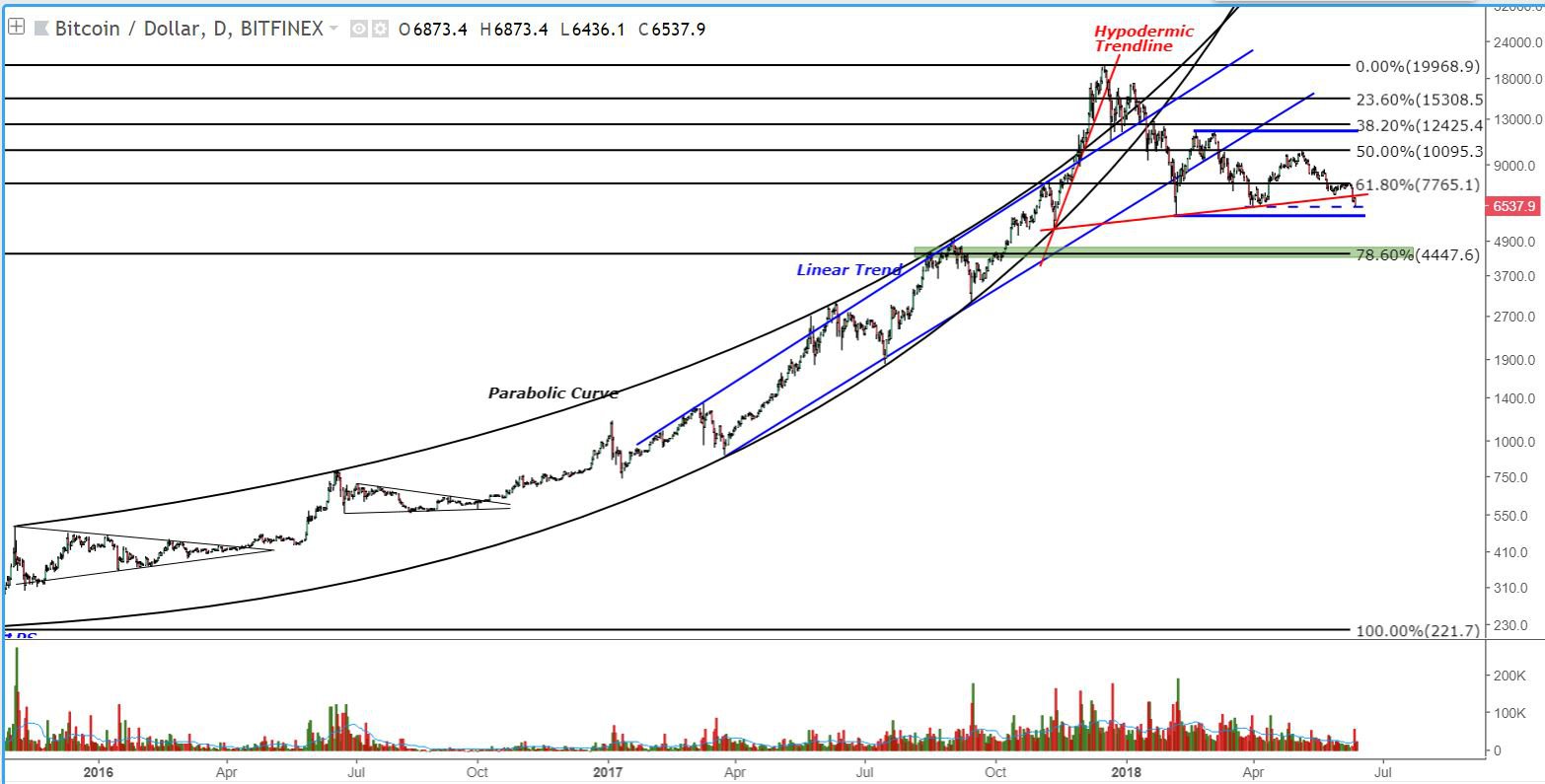 If we draw out the Fibonacci retracement set for this entire parabolic run-up, we see a potentially strong level of support around the 78% retracement (the $4,500 range). Historic parabolic run-ups have, at maximum, retraced to the 78% range before ultimately bottoming. To me, this area is a strong zone of observation and not necessarily a zone of action as the price target of the aforementioned symmetrical triangle is well below that.

It’s very important to keep in mind this is all hypothetical and contingent upon the market response to the various support levels. At the time of this article, we are currently testing the strength of the first, initial, crucial support level.

Trading and investing in digital assets like bitcoin and ether is highly speculative and comes with many risks. This analysis is for informational purposes and should not be considered investment advice. Statements and financial information on Bitcoin Magazine and BTC Media related sites do not necessarily reflect the opinion of BTC Media and should not be construed as an endorsement or recommendation to buy, sell or hold. Past performance is not necessarily indicative of future results.