Remember when Bank of Canada Governor Poloz surprised the market with a second rate in early September? It caught the market off-guard as the market had priced in much less than a 50% chance of a hike. 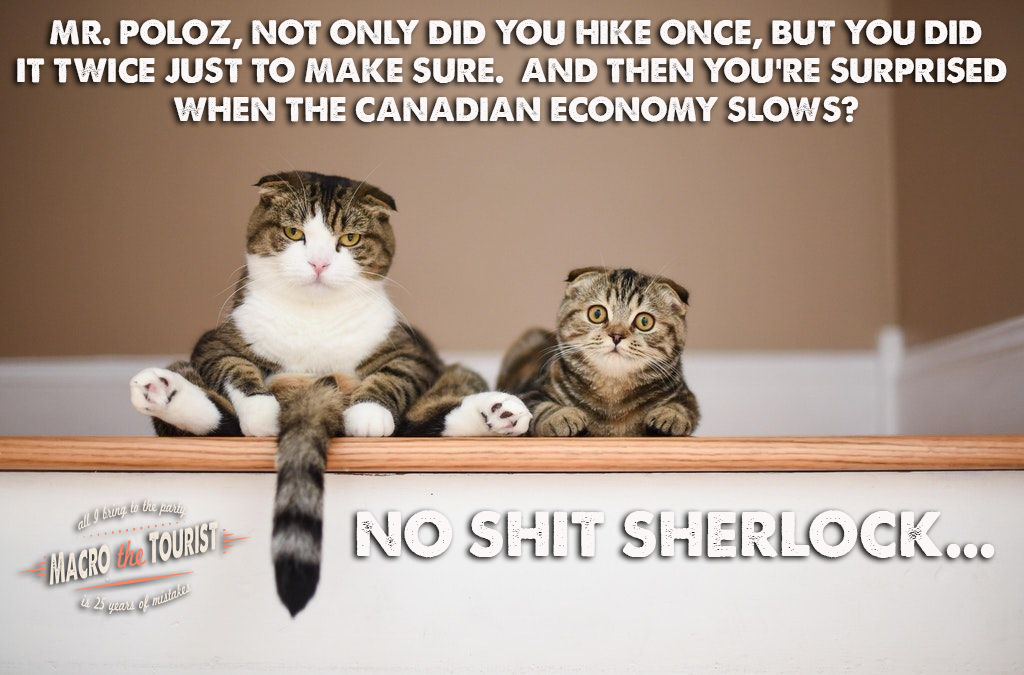 Here is the chart of the BAX futures and CAD on the day Poloz shocked the market with the second unexpected hike. 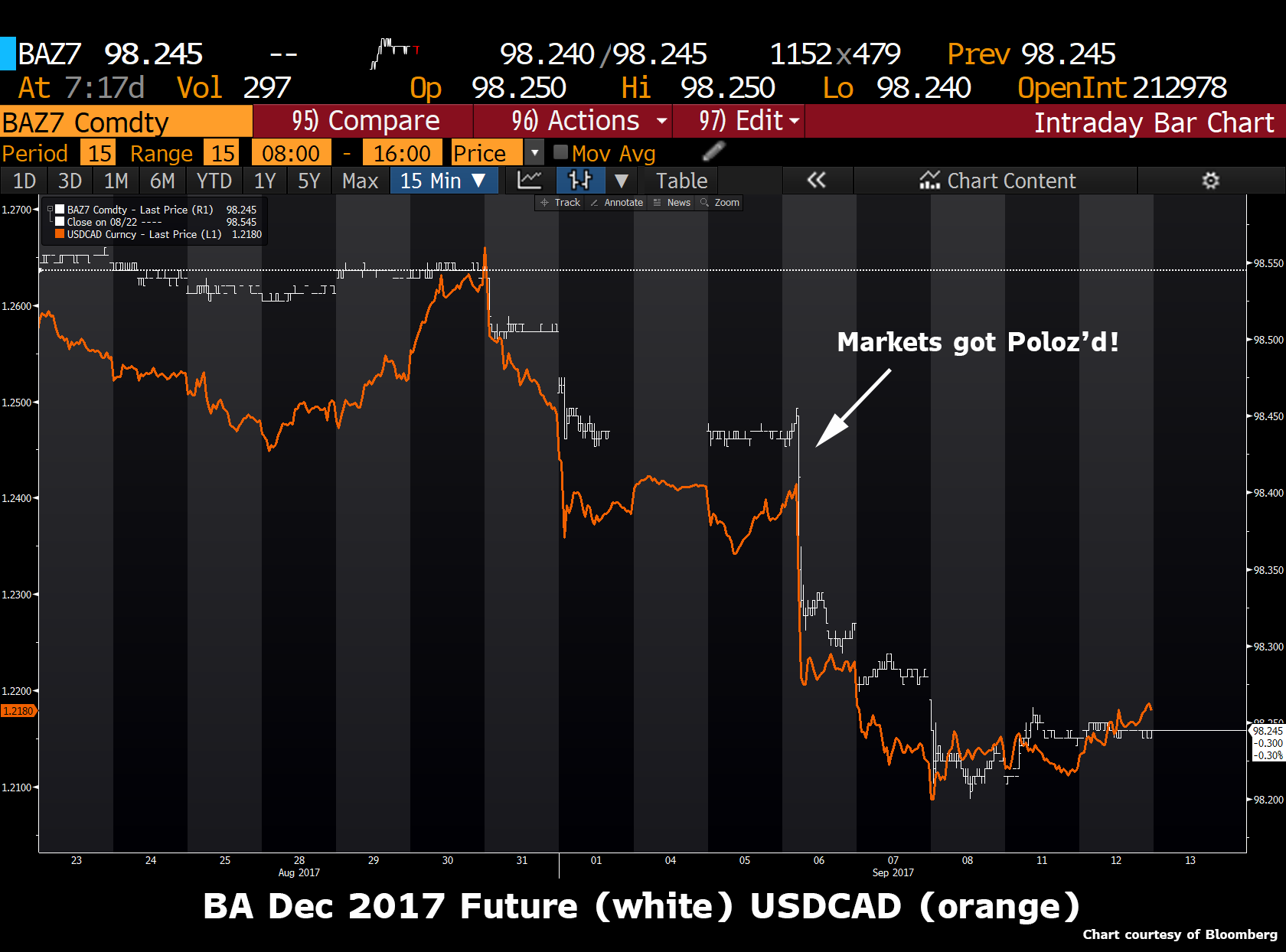 Contrary to the Federal Reserve, which, in modern times, have never tightened when there was less than a 50% chance, the Canadian Bank Governor decided to teach the market a lesson. He purposely wanted to introduce some two-way risk into monetary policy. It was a return to Central Banking days of old. Poloz argued that in normal times, there was no need for extreme Central Bank hand holding. From Bloomberg reporter’s Luke Kawa:

The Bank of Canada has gone back to the future.

For the past decade, traders have been conditioned to expect central banks to both telegraph policy tweaks ahead of time and offer a thorough rationalization of those shifts at the time of implementation.

Canada’s central bank provided neither when hiking its benchmark rate to 1 percent on Sept. 6. Monetary policy makers hadn’t spoken publicly since July 12, when they delivered their first increase in almost seven years, nor was the latest decision followed by a press conference.

The data – which showed the Canadian economy expanded at a torrid pace of 4.5 percent in the second quarter, with core inflation measures beginning to edge higher – spoke loudly enough.

It’s a throwback to the way central bankers used to operate in the 1980s and 1990s, when policy shifts could be made on any business day, without warning. The Bank of Canada didn’t adopt fixed announcement dates until the new millennium.

“It’s bringing monetary policy back to what it was 20 years ago – no bells and whistles, just a decision and a statement,” said Christopher Ragan, associate professor of economics at McGill University and former special adviser at the bank.

Although I understood Poloz’s motivation, at the time I commented that it was too far, too fast. In this era of over-indebted balance sheets, two aggressive rate hikes are as bad as double secret probation. The reality is that no country can afford to have the most aggressively tight monetary policy. Whoever is foolish enough to attempt to return their monetary policy to normalcy, finds themselves at the end of a strong currency, and importing all the world’s deflation.

The classic policy error was ECB Chairman’s Trichet’s 2011 double hike due to all the inflation he foresaw on the horizon. 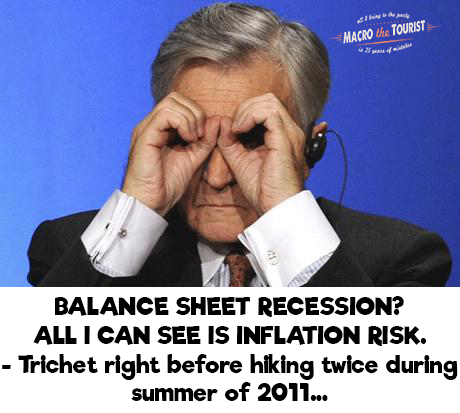 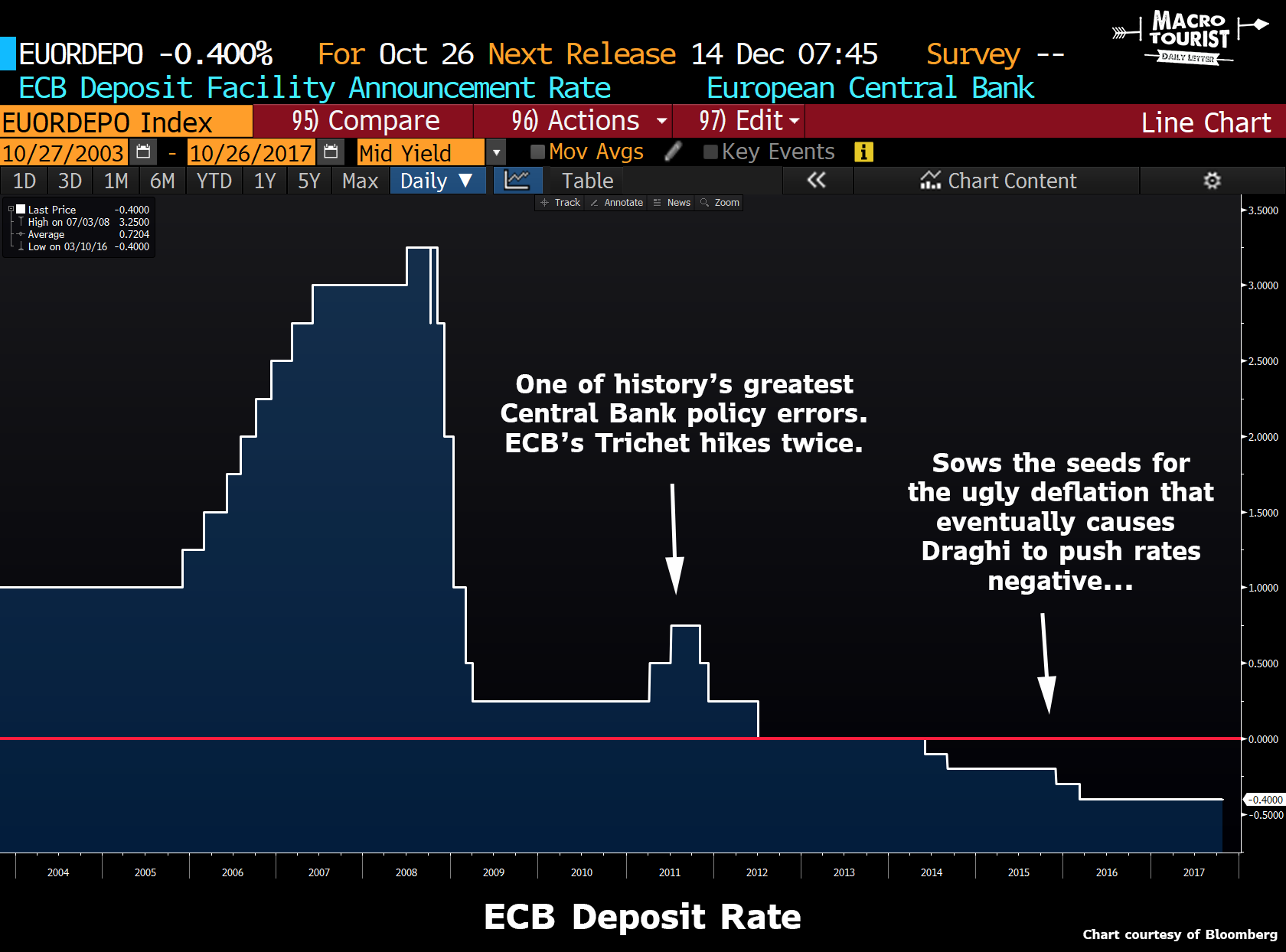 Canadian economy rolled over almost to the day of the second hike.

Don’t believe me? Check out this chart of the Canadian Citibank economic surprise index. 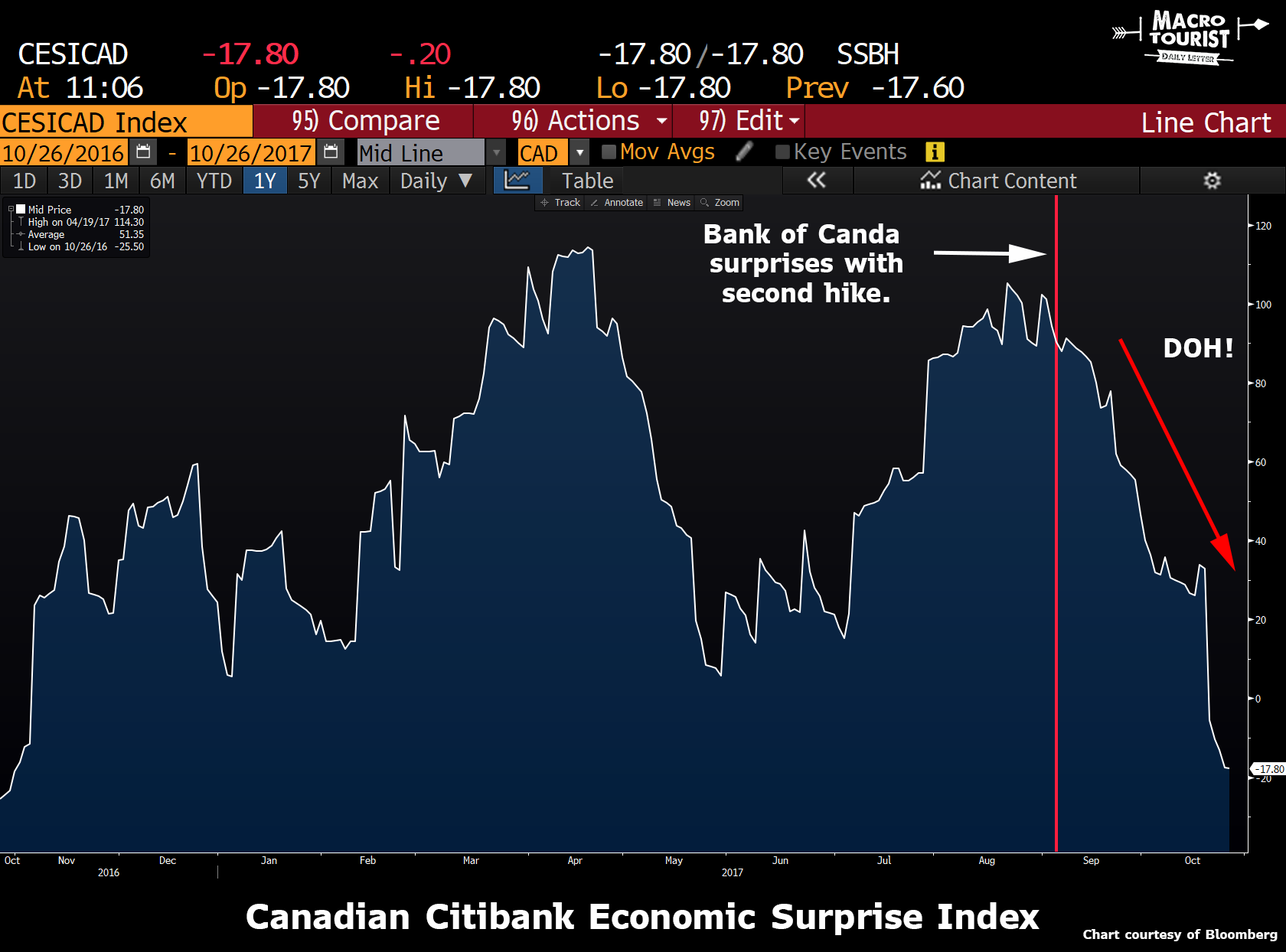 Notice the red line. That’s the day of Poloz’s surprise second hike. Since then Canadian economic data has consistently come in below expectations.

It’s no surprise that at yesterday’s Bank of Canada meeting, Poloz delivered a dovish pause. After two hikes, the Canadian economy has stalled, and even more worrying, there are some large risks on the horizon.

Although both Vancouver and Toronto have managed to cool their red-hot housing markets with the introduction of foreign buyer taxes, the Canadian government is concerned about the amount of credit being extended to Canadians. In an attempt to slow down the pace of credit creation, the government has created a series of new hurdles that homeowners must meet before being eligible for loans. These mostly entail being able to qualify for loans using higher than current market rates. These new rules go into effect January 1st.

The other concern for the Canadian economy is the renegotiation of NAFTA (North American Free Trade Agreement). Even though it is in both countries’ interest to come to an agreement, there is a very real possibility that President Trump’s government will not draw that same conclusion. Canada’s largest trading partner (by a long shot) is America. And although this is also true for the United States, the reality is that a collapse of NAFTA will be much more painful for Canada. Therefore, there is a decent chance that Trump chooses to take a hard line, forcing the collapse of the trade agreement. It would score political points for Trump in states that are desperately needing jobs. Forget that it will also hurt America – this is not a decision based on trying to find a win-win, but instead making political points for a President in desperate need of a victory. I wish it wasn’t the case, but I think the chances favour the talks collapsing.

All of this adds up to some major headwinds for the Canadian economy. Real estate has been one of the lone bright spots, but that’s increasingly looking like the next round of news will be negative. NAFTA uncertainty is causing businesses and investors to pause before committing any more capital to Canada. And given the last two aggressive Bank of Canada hikes, the monetary policy lag argues that the worst is still be felt for the Canadian economy.

And it’s not like the market hasn’t figured this out. Since Poloz’s second hike, the Loonie has been dripping lower. 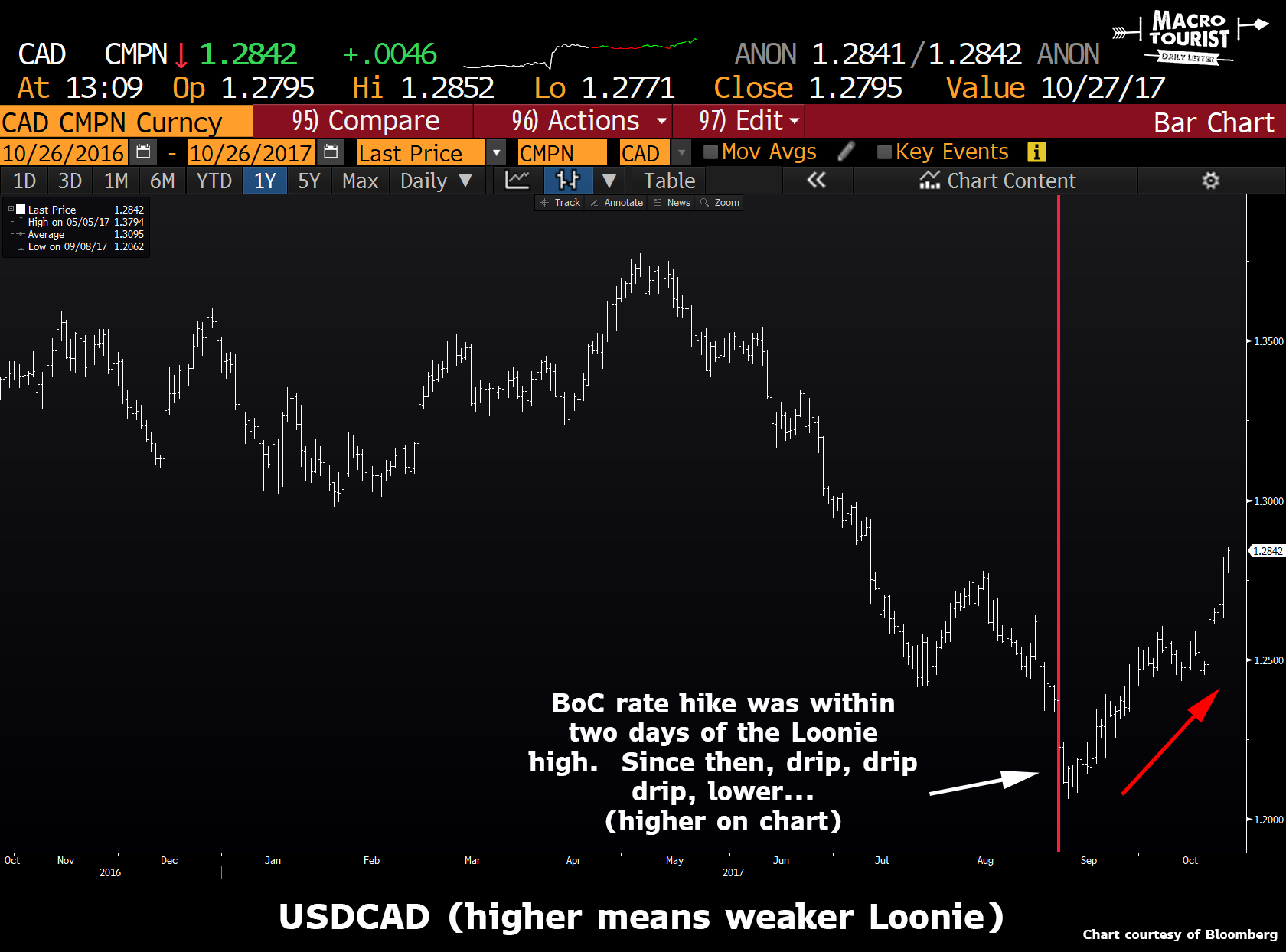 But is it all baked-in? Or is there more to come? And is there a better way to play it?

The day after Poloz surprise hike, I mentioned a trade designed to take advantage of the market’s over-enthusiasm for Canada rate hikes as compared to the US rate hike path. At the end of my piece, The Trump Eclipse Bottom, I mentioned that I was buying June 2019 BAX futures (Bankers Acceptance futures – Canadian short-term interest rate futures) against selling same expiry Eurodollar futures (US dollar short-term interest rate futures.) Here is the chart I included in that post: 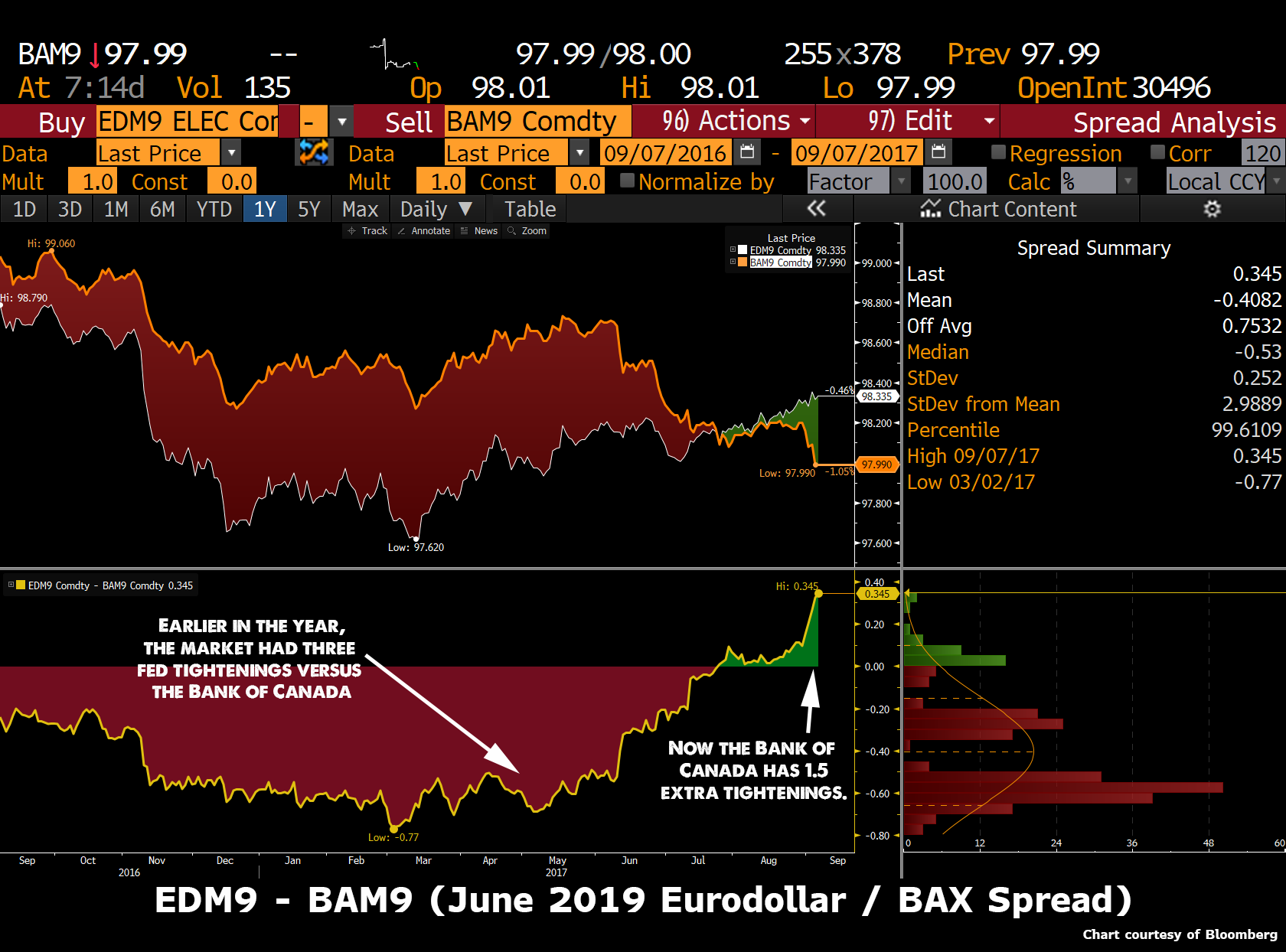 At the time, investors were convinced Poloz was going to continue down this rate tightening cycle, and they had priced in almost 2 extra hikes Canadian hikes versus America out to June 2019. In my post, I said that I expected these contracts to converge in the coming months as it became obvious the Canadian economy couldn’t handle the aggressive monetary policy.

Well, proving even the blind squirrel finds an acorn every now and then, I managed to get that call right. 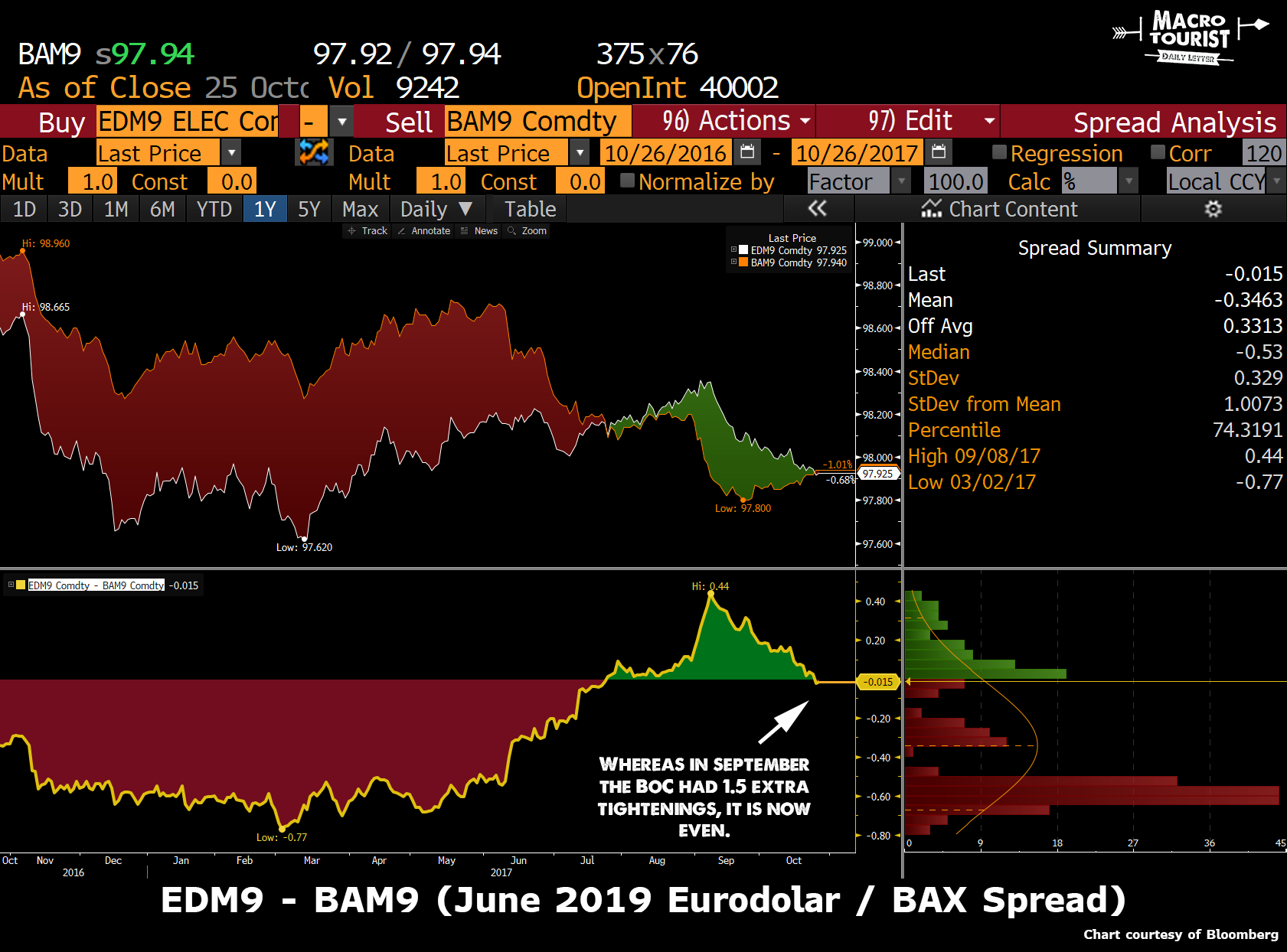 However, in true MacroTourist fashion, I got bored with this trade, and after it went 10 ticks my way, like a mope, I took it off the sheets. And now I am sitting staring at the interest rate convergence, wondering where it goes next.

And although I hate to say it, I wonder if this trade has more room to run. Granted it’s nowhere as compelling as before, but the Canadian economy is heading into quite the headwind. Contrast that to the US where, with a little luck on a tax bill, there could be some decent fiscal stimulus giving the economy a push. No doubt in my mind which economy outperforms in the next six months.

So even though it pains me to put a trade back on at worse levels, I am climbing back on board, buying BAX June 2019 and shorting ED Jun 2019. I expect we will eventually hit a point where there is a full extra hike priced into the US curve. Hopefully this time I will have the patience to hang on.

Yesterday morning ECB President Mario Draghi updated the quantitative easing tapering plan. As far as I can tell, it was pretty much in line with expectations, yet the bund future is trading up 77 ticks as I write this.

At the same time, the pessimism surrounding US Treasuries is running thick. Instead of following bunds higher, the 10-year t-note future is trading down small.

The bund/treasury spread has been widening over the past month, but yesterday’s decline has really accelerated the trend. 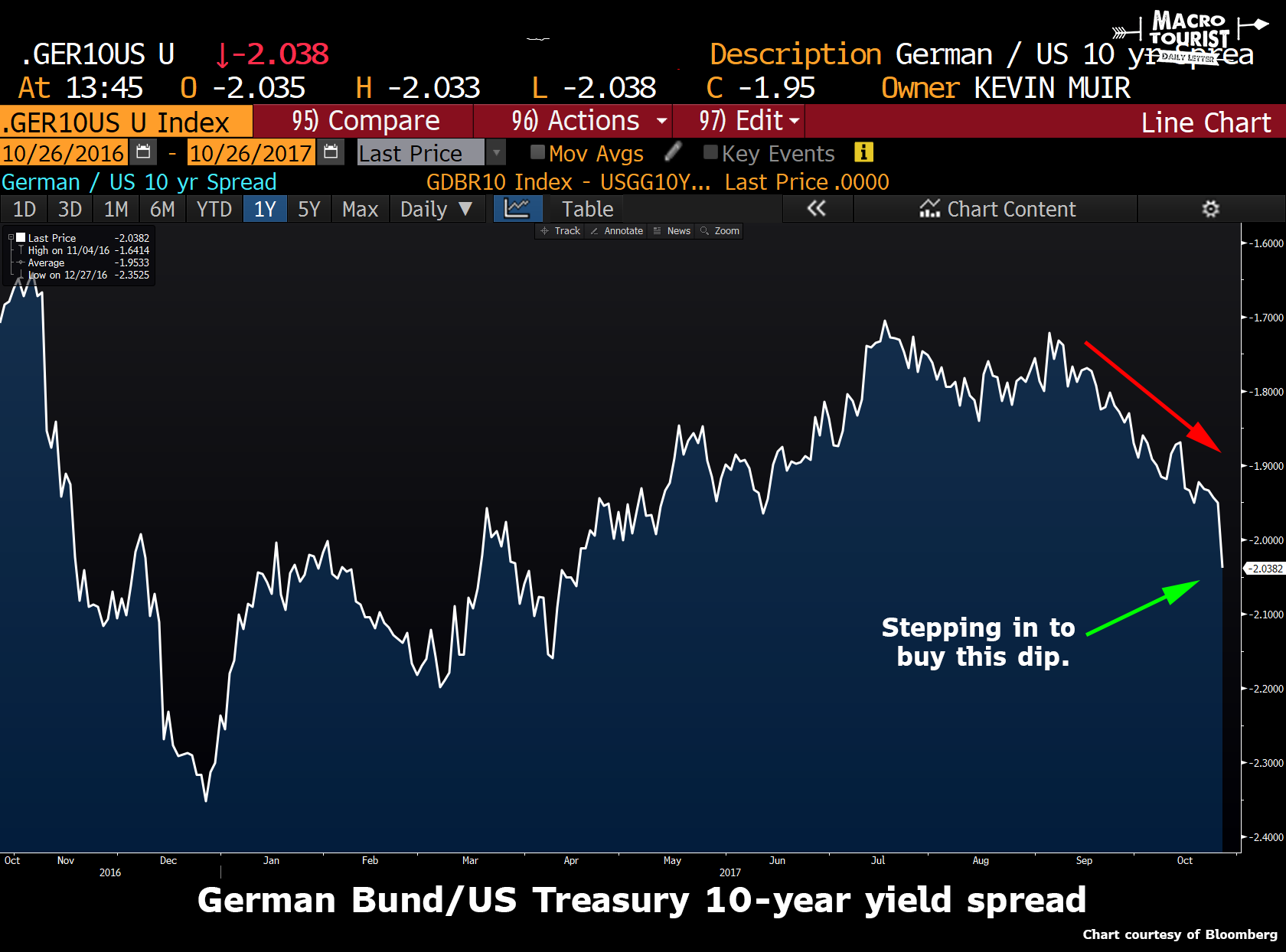 I noticed there is all sorts of bearish US treasury talk hitting the tape over the past couple of days. Calls for the next great bear market if 10-year yields break over 2.4% are filling my inbox.

I am a huge Kodiak Grizzly of a bond bear, but breaking some arbitrary level is not going to cause the next collapse. Anytime I hear this sort of pessimism, the trader-in-me wants to write some blue tickets.

Given my bearish persuasion, I can’t bring myself to get long bonds, but I will put this spread on as an alternative to expressing this view. So I am buying US 10-year T-note futures and selling bund futures against it. For those that need the ratios, here is the Bloomberg screen.

I know I am catching a falling knife, but that’s the kind of knob that I am. It’s only because I am already missing so many fingers that I am willing to attempt this sort of stupidity. I have been sitting on my hands for quite some time, waiting for my opportunity to add to this trade. Well, it’s here. And don’t forget, this trade has a monster positive carry. Even if it just goes sideways from here, it would be a good win.