Authored by George Griffiths via Platts’ “The Barrel” blog,

As the UK’s self-imposed Brexit deadline of March 29 looms, some market participants in the container shipping industry are bracing themselves for a boost in rates.

Hopes of more clarity on the future relationship between the UK and the EU were dashed after Prime Minister Theresa May lost a vote in the House of Commons on her negotiated deal with the EU on January 15, in the greatest defeat of a sitting government in UK history.

As a result, the container shipping market is eyeing support for all-inclusive freight rates and utilization of capacity on vessels along key head-haul routes to the UK, as importers seek to stockpile goods before this date.

The market has already seen some support in recent months, with November rates bearing much of the brunt. But a last-minute jump in demand remains likely in the market.

A sideways glance at the news on a near daily basis shows the British public squirreling away essential supplies. Members of Mumsnet, an online parenting forum, have been discussing their plans to stockpile medication, toiletries, tobacco and hair dye. The BBC ran an article on January 15 on “Brexit boxes” which cost upward of £300, spanning freeze-dried food, water purification and fire starting kits.

The hoarding seen in the cupboards and kitchens of households up and down the country has a parallel in the major shipping lanes.

UK supermarket giant Tesco announced on January 16 that it will be renting refrigerated containers to increase the amount of frozen goods it can stockpile to prevent disruption stemming from Brexit, further fueling this shopping frenzy.

Some importers are looking once again to the Far East to increase imports into the UK, in case there are issues regarding customs and product gets delayed at the coast. This has potential ramifications not only for UK-EU trade, but for trade from North Asia – UK and North Asia – North Continent (any port between Gibraltar and the Baltic Sea), with freight rates to the UK likely to price as a premium over rates to the continent should there be logistical issues to encounter along this route.

The questions around ease of transit and unloading, and additional demand, comes on top of seasonal demand trends. Freight rates typically strengthen ahead of Chinese New Year, with people aiming to imports goods from China before the holiday hits and some factories close for as long as three weeks, curbing exports.

S&P Global Platts has seen the North Asia – North Continent Platts Bunker Rate 1 (PBR1) container shipping lane increase significantly since the end of 2018, with carriers desperate to move product out before the shutters come down on the Chinese infrastructure, and the Year of the Dog draws to an end. 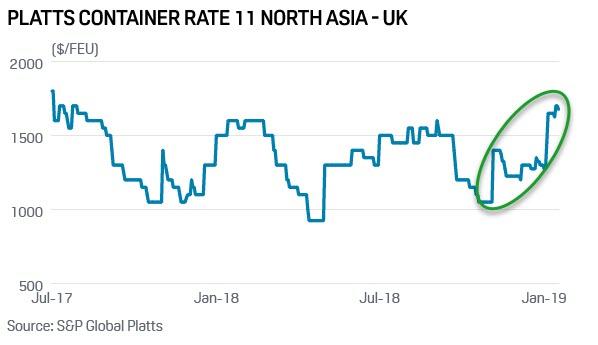 “Will we see any movement of goods in the second half of February is the question – it all depends on how long China is off for the holidays,” said a container carrier source. With New Year celebrations sometimes extending into three weeks, it appears as if this surge in demand could be squeezed into a relatively short period of time.

Netherlands-based Samskip announced on November 11 that they would add a “Pre-Brexit Peak Volume Surcharge” to containers on their 14 weekly sailings between Amsterdam, Rotterdam and Gent, and the UK ports of Hull, Tilbury, Grangemouth and Belfast.

“As we move towards March 29 the demand for our transport services avoiding the ferry ports of southern England is increasing. Furthermore, we foresee that demand will outstrip supply before abruptly reducing in April as stock is first built up in February and March and then consumed in April before a restart at some point in late April/May,” the company said. Samskip’s surcharge will be Eur243 per load, showing just how strong they expect demand to be over this period.

Despite this, other think that the majority of stockpiling has already occurred and there is just notional amounts left to do for this year.

“Lots of pre-Brexit stockpiling for October-November, especially around Golden Week, but not now – it was always going to be tricky to stockpile in January with Chinese New Year just round the corner,” said a market participant.

Container carriers may be rubbing their hands with glee over the support this could give to the market. That prospect will be less pleasing to UK importers and potentially their customers – Mumsnet hoarders included – who are likely to shoulder the increased freight element, making future stockpiling an ever more expensive action. The old maxim appears to ring true once more: one hand giveth, the other taketh away.