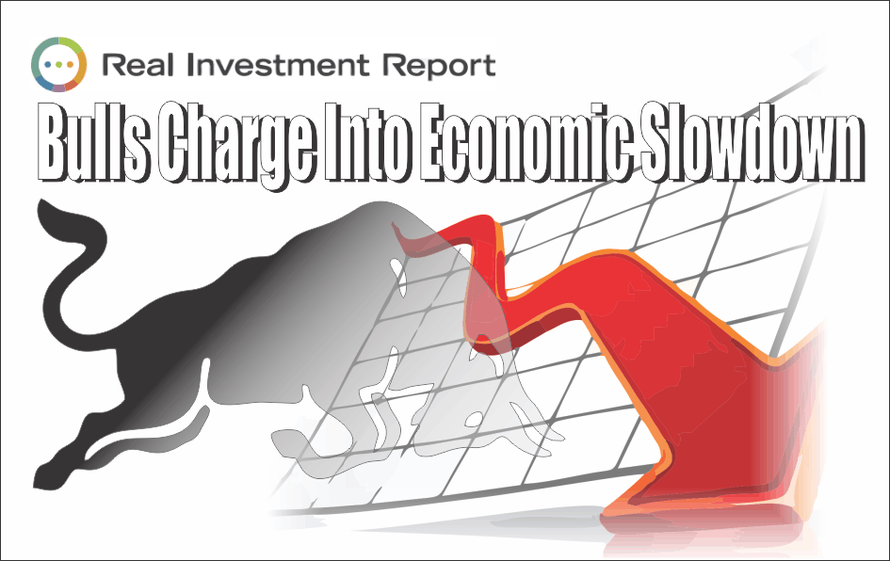 “The first is the Fed.

As we discussed with our RIA PRO subscribers (use code PRO30 for a 30-day free trial) last week,

“Today, [Cleveland Fed Reserve Governor Loretta Mester] all but put the kibosh on further rate hikes and, per Mester’s comments, will end balance sheet reduction (QT) in the months ahead.”

The second is “hope.”

On Friday, on headlines that talks are continuing with China, the market pushed through those resistance levels as shown below. “ 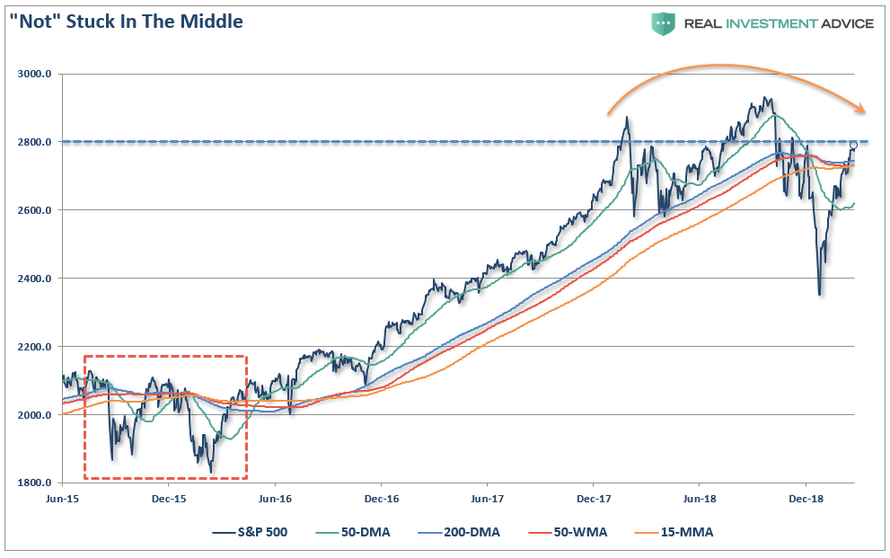 It is virtually the same story during this past week.

It is EXACTLY the same story this week.

However, the Fed’s actions should actually make you question the significance of any resolution on trade.

“Why do you say that? Everyone knows the trade dispute was a big factor in the sell-off last year?”

But, if that was indeed the case, then the economic turmoil should be primarily tied between the U.S. and China. However, as I discussed in “The ‘There Is No Recession In Sight’ Chartbook,” the economic disintegration has gone global. 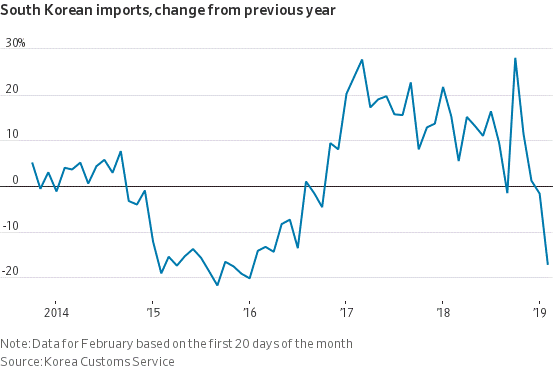 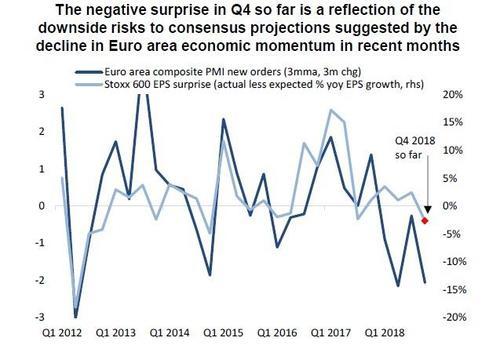 And as David Rosenberg noted:

The Citi Global Economic Surprise index, at -21.6, is nearly the same as it was at the Dec 24th market low. It’s now 227 days below zero — only exceeded by the Great Recession of 2008-09. Markets totally devoid of economic realities. pic.twitter.com/KnbnohRjIy

In other words, there is more going on globally which has very little, if anything, to do with U.S. trade wars with China.

Which brings us back to the Fed.

“Participants supported the removal of the hiking bias and its replacement with a sentence emphasizing a ‘patient and flexible approach.’ Participants pointed to tighter financial conditions, softer inflation, slower foreign growth, and trade policy uncertainty as justifying a patient approach to policy. However, a range of views were expressed on what adjustments to the funds rate may be appropriate later this year. ‘Several’ participants argued rates increases were necessary ‘only if’ inflation was higher than in their baseline, but ‘several’ other participants indicated that hikes would be appropriate if the economy evolved as they expected. In addition, ‘many participants noted that if ‘uncertainty abated,’ the FOMC could alter the ‘patient’ statement language.”

Why the sudden switch from “hawkish” to “dovish?”  Was it just the market correction that sent Jerome Powell scurrying for cover, or, despite still optimistic views on U.S. economic data, is there more to the story than they are currently saying.

If such is the case, then the recent rally in the markets may NOT be justified and further deterioration in forward earnings may become more problematic. This is particularly the case as valuations have quickly reverted back to near 30x earnings.

The bull charge into an economic slowdown is not a trivial matter.

Historically, it is the point where Fed has stopped their monetary policy interventions that things have gone wrong. 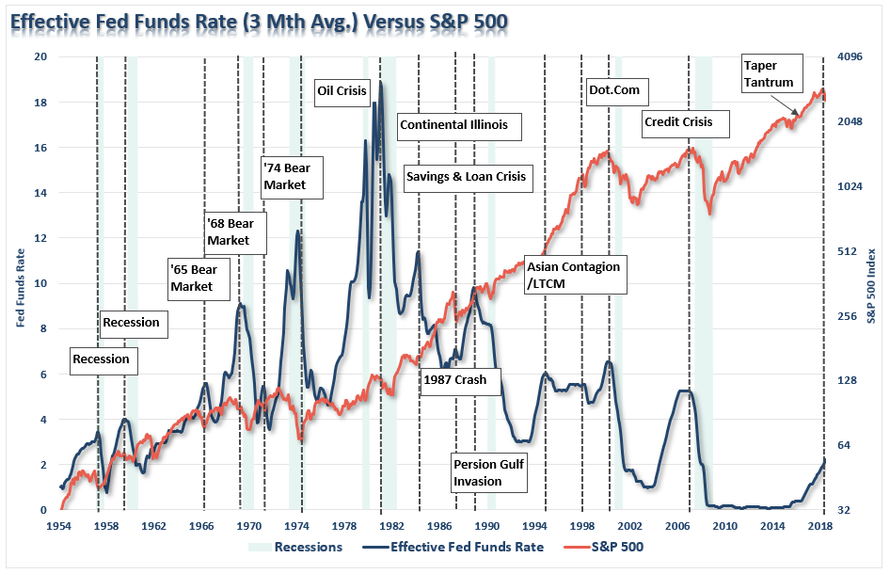 But that is not necessarily a bad thing. As we discussed with our Pro-Subscribers last week, this is where opportunity also lives:

“Those who see that the last 10-years of experimental stimulus has been on par with, or arguably exceeded, policies historically reserved for major wars gain a unique and valuable perspective of the current monetary mirage. The demise of those policies, as they are bound to unravel, will reveal a multitude of investment opportunities left behind in the ill-advised euphoria of anti-capitalism.”

There is nothing wrong with “hoping” for a positive outcome from “trade talks.” We should be hoping for that. The problem is the rush to “buy” equities has effectively “priced in” the best of all possible outcomes which suggests any resolution could be disappointing.

The Technical Backdrop Is No Longer Optimal

As we have discussed over the last several weeks, we have been increasing and rebalancing exposures in our equity portfolios following the December 24th low. This is simply because the technical backdrop had gotten extremely lopsided, very quickly, into extremely “bearish” territory. Now, eight-short weeks later, the reverse is now true.

“Paul Schatz, the president of Heritage Capital, told MarketWatch in a phone interview that ‘bear markets never, ever, ever begin when the A/D line is making an all-time high.’” 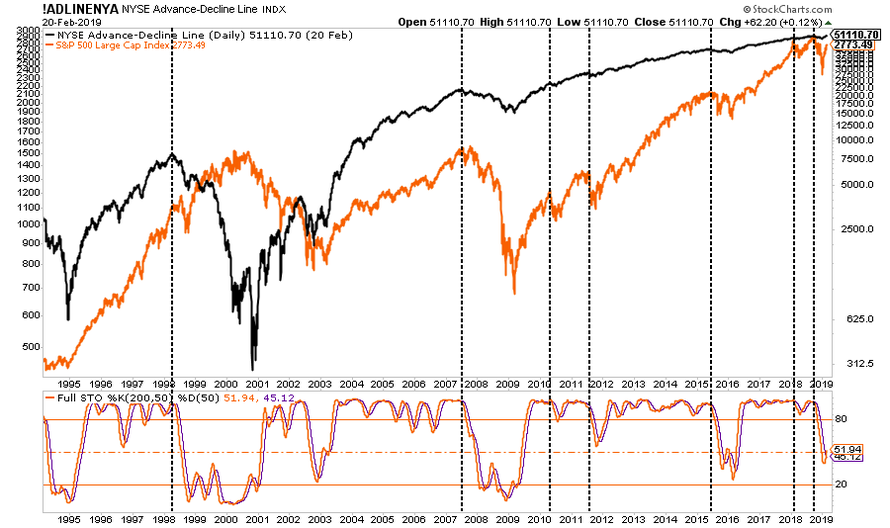 It also makes no sense.

Bear markets, or even just simple garden-variety corrections, start AFTER markets have been advancing. Therefore, it is only logical that bear markets ALWAYS start after advance-decline lines have reached higher levels.

Here is a monthly chart of the NYSE Advance/Decline line versus the S&P 500.

As you will note, we are currently on an Advance-Decline line monthly “sell signal” from a high level. The last time this occurred was during the 2015-2016 bear market.

While this time could certainly be different, as anything is always possible, the alignment of weaker earnings, weaker economic growth, and extremely overbought and extended technicals suggest the current rally is likely limited in its current advance.

As I noted last week, the slope of the advance in the market since the December 24th lows has not been this sharp…well….ever. 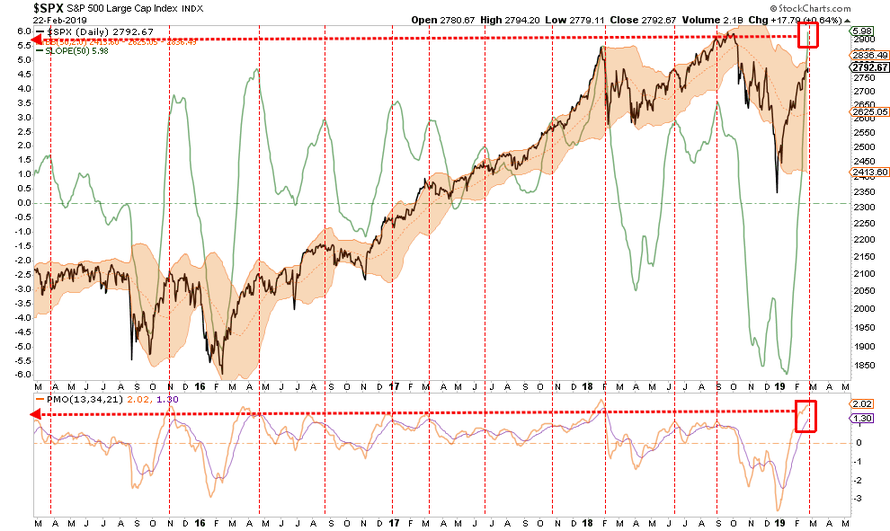 What To Expect Next

This analysis continues to confirm what we said last week:

“First, I am making the assumption the momentum of the market continues to push stocks toward the psychologically important level of 2800 on the index over the next few days.”

That occurred last week as the markets closed the week just shy of that level. This keeps the analysis from last week in “play” at the moment.

With the markets extremely overbought, and much of the Fed “news” and Trump “trade” agreements already built into the market, the most likely outcome remains a “sell the news” event. The levels for that correction remain as follows:

Level 1 = 38.2%: The first correction to relieve some of the extreme overbought condition of the market, and provide investors with a better opportunity to increase equity risk is at the 38.2% retracement level. This would be a retest of the support levels from the Oct-Nov lows and the 50-dma. (Most likely for now)

Level 2 = 50%: If the markets are unable to hold support at the Level 1 correction, then a fall to the 50% level is highly likely. Such a correction is much more bearish in nature and suggests a retest of the December 24th lows is probable. (Bearish, important support could make a tradeable bottom.)

Level 3 = 61.8%: If the markets get to this level, it is likely the markets will be oversold short-term and a bounce likely. However, that bounce should be sold into as a retest of lows is probable. (Bearish, something more material has gone wrong.)

This analysis also corresponds to the extremely rapid reversion of both technical and sentiment measures, as well as the level of short-interest in the market which has now fallen to levels not seen since 2008. 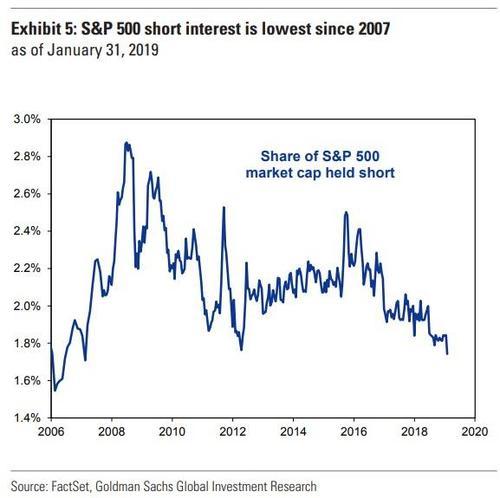 Let me reiterate from last week:

“The important point here is that from a contrarian standpoint, markets have gotten way ahead of the underlying fundamentals. While the market may indeed end the year on a higher note, it will most likely not do that without lower prices first.”

While our portfolios remain primarily long -biased currently, we are holding a higher level than normal of cash and have added small levels of “hedges” to portfolios which we will begin building into as the market reverses.

Statements like these are always misinterpreted to mean that we are “bearish,” hiding in cash, and have 6-cases of spam and a carton of Twinkies sitting on our desk.

Our job as investors, and portfolio managers, is to navigate the market capitalizing on opportunity when they are available, and preserving capital when risks exceed our thresholds.