On Monday morning, the CBO announced  in its latest forecast that, as widely expected, U.S. budget deficits are set to widen further in coming years and economic gains will be muted” – a growth outlook that’s weaker than the Trump administration’s target of at least 3 percent growth. However, the surprise was that contrary to the CBO’s last forecast, the budget deficit is now expected to hit $1 trillion two years later than previously projected.

“That reduction in projected deficits results primarily from legislative changes — most notably a decrease in emergency spending,” the CBO said, somewhat optimistically especially since the economy is forecast to slow over the next three years with the growth rate easing to 2.3% in 2019, 1.7% next year, and 1.6% in 2021, the CBO forecasted; growth was an estimated 3.1% last year.

“The slowdown begins in 2019 as the positive effects of recent tax legislation on business investment are expected to wane and federal purchases under current law are projected to drop sharply starting in the fourth quarter of this year,” according to the report.

There is one problem with this forecast: Wall Street disagrees vehemently, and according to analyst forecasts, the Treasury Department will see further acceleration in sales of long-term debt to finance the government’s widening budget deficit, with new issuance projected to top $1 trillion for a second-straight year. As Bloomberg notes, many strategists at primary-dealer firms predict that this Wednesday’s quarterly refunding announcement will see the Treasury maintain note and bond sales at the record high levels they have boost.

According to one specific forecast, that of Steven Zeng from Deutsche Bank, the Treasury’s total net new issuance in 2018 amounted to $1.34 trillion, more than double the 2017 level of about $550 billion. In 2019, it will be $1.4 trillion, with $1.11 trillion from more coupon-bearing debt and the rest in bills.

Some more details from DB:

The increased Treasury issuance follows tax cuts and government spending increases implemented under the Trump administration, and, as Bloomberg notes, “that’s darkening a fiscal outlook already made worrisome by rising entitlement-program expenses and higher costs to service America’s nearly $16 trillion in debt. Meanwhile, the Federal Reserve’s balance-sheet runoff is also adding to supply, forcing the Treasury to reach out to the public for even more funding.

The fiscal 2018 U.S. budget gap hit a six-year high of about $780 billion, and the Congressional Budget Office forecasts it will reach $973 billion in 2019 and top $1 trillion the next year. Over the next decade, the U.S. government will spend about $7 trillion just to service the nation’s debt, according to the CBO. 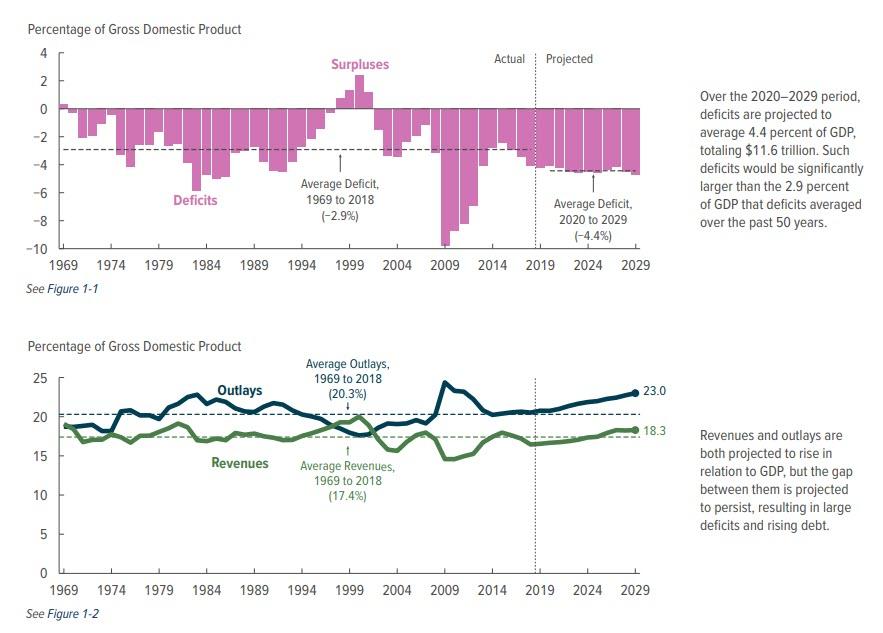 Of course, there is no change to the CBO’s long-term forecast of debt issuance which is, basically, apocalyptic as the following chart confirms. 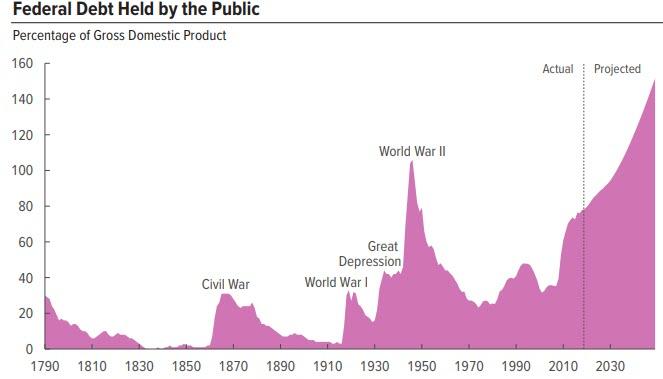 Curiously despite the flood of supply, Treasury yields haven’t surged higher because demand hasn’t dropped for the world’s safest securities, as confirmed by the just concluded very strong 2Y auction.

“With all these problems, we’re still in better shape than so many of the other advanced economies,” said Phillip Swagel, a University of Maryland professor and former Treasury official during the George W. Bush administration.

Yet investors aren’t so sanguine, most notably DoubleLine Capital LP’s Jeffrey Gundlach who has repeatedly warned that the U.S. economy will be plagued by an ocean of debt. He cited the fiscal 2018 rise in America’s national debt among risks in his annual webcast, and just overnight tweeted that currently the US has “$122 Trillion US unfunded liabilities per Debtclock. That’s 564% of Fiscal ‘18 GDP.  To fund would require 10% of GDP for 56+ yrs.”

Yet while it is a virtual certainty that the CBO is wrong, and that US deficits will continue to soar as the US is forced to issue over $1 trillion in net debt each year, the wildcard is whether the Fed will slow down is balance sheet tapering. Last year, the Fed’s Treasury holdings fell by about $230 billion in 2018, compared with a reduction of $18 billion in 2017. An additional $271 billion should roll off this year, according to JPM, and the Treasury will have to find an offsetting amount of demand for this paper. 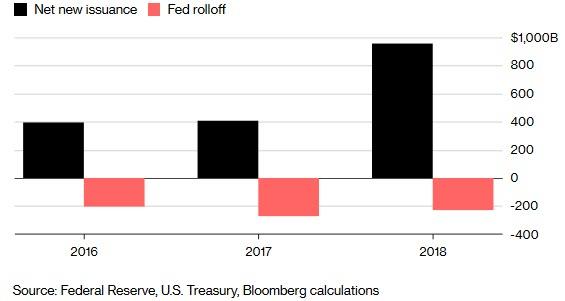 “Net borrowing needs will continue to increase due to the expected increase in the deficit combined with funding needs coming from the Fed’s debt run off,” said Margaret Kerins, global head of fixed-income strategy at BMO Capital Markets Corp.

“Given the global backdrop with Brexit and China’s economy slowing down, there is really a bid for safety, liquidity and quality — which means Treasuries — and that’s keeping yields in check to some degree.”

Of course, at some point the market will finally start focusing on America’s long-term – and very much unsustainable – debt picture as the CBO has warned year after year. When it does, and when there is another major selloff in stocks, US Treasurys will no longer be the “safe haven.” If and when that happens, that will be the signal that the time to get out of Dodge has finally arrived.