Chinese troubled conglomerate HNA, whose Co-Chairman Wang Jian allegedly committed suicide during a business trip to France last summer, has once – again – cut its stake in Deutsche Bank by nearly a fifth to 6.3%, a new SEC filing shows. That marks the latest reduction in HNA’s holdings of the largest German Bank, which as of February 8 held 7.64% of the voting rights.

HNA’s C-Quadrat unit exercised options to sell 26.8 million Deutsche Bank shares for 363.4 million euros ($410 million) according to an SEC filing, BBG reported. The shares were sold at prices ranging from 11.45 euros to 16.70 euros apiece, far above current market prices, because the Chinese group had hedged its investment in Deutsche Bank with put options. Deutsche Bank shares closed at 7.752 euros in Frankfurt on Friday

Even with its reduced holdings, HNA remains the largest shareholders in Germany’s largest lender, just ahead of the Qatari royal family, which owns 6.1% while Blackrock is in third spot with 100 million shares representing 4.85% of the shares outstanding.

Hainan-based HNA started out as a regional airline but went on to take large stakes in companies such as Hilton Worldwide and Deutsche Bank, part of a $40bn acquisition binge that made it one of China’s largest owners of overseas assets, the FT summarizes. HNA initially bought into Deutsche Bank in early 2017 as part of a sweeping global acquisition spree which led the company to acquire billions in foreign companies and US real estate, borrowing heavily to amass a stake of close to 10% with the stake gradually reducing since then as this complex financing has unwound. 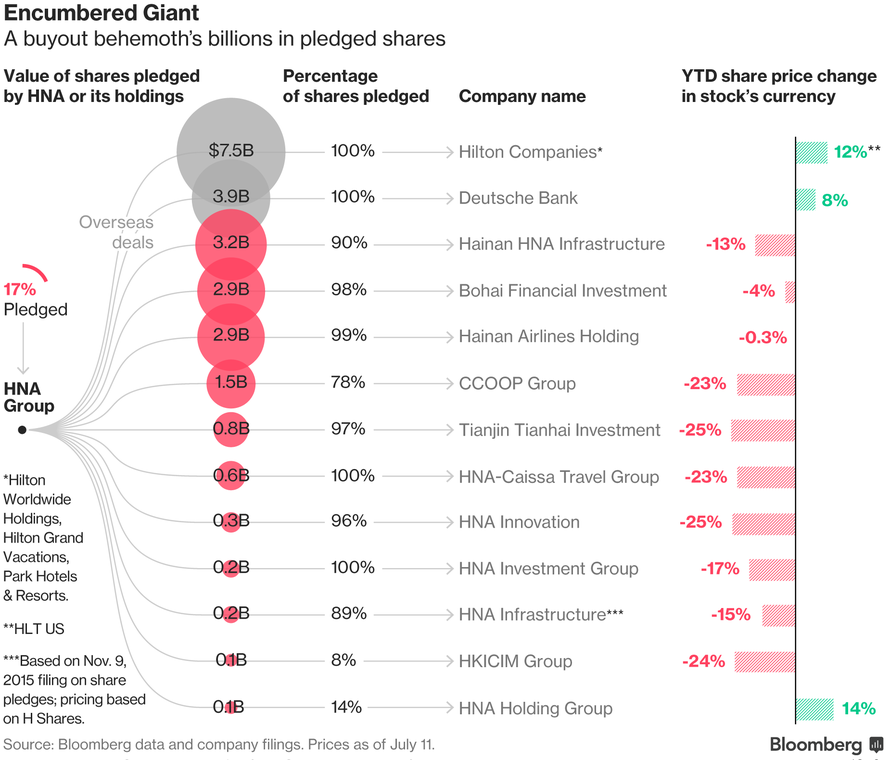 But it has since trimmed its stake in installments, following an aggressive crackdown by Beijing targeting offshore money flows,  with high debts at the conglomerate fueling speculation about the future of its Deutsche stake as it reduces or exits some of its other holdings. In parallel, HNA has put its buying spree into reverse making a series of divestments that include parts of its core aviation business, in a bid to tackle the nearly $100bn debt pile it amassed, which last year sparked concerns that China’s financial conglomerates could become ground zero for a financial crisis engulfing China.

One year ago, HNA itself was said to be on the verge of liquidation, however aggressive asset liquidations have so far deferred the company’s day of reckoning.

HNA holds the stock through Austrian fund C-Quadrat and a chain of offshore holding companies, while Swiss bank UBS provided a derivatives product known as a funded equity collar to help build the stake. As Reuters further notes, HNA’s interests in the bank are represented through a member sitting on Deutsche Bank’s supervisory board. Before the latest reduction, C-Quadrat held a direct stake of 1.01 per cent in Deutsche Bank, with another 6.63 per cent held through equity collars. According to the FT, the reduction in the stake was the result of the expiry of these derivatives. In July of last year C-Quadrat transferred options on more than 26 million of its Deutsche Bank shares to JPMorgan Securities.

Equity collars originally developed as a way to hedge against a drop in a company’s share price, with Saudi Arabia recently using such a collar to slash its exposure to Tesla’s volatile share-price swings. Investment banks can also use the mechanics of this hedging to help investors discreetly build a fresh stake in a company, while deploying little of their own capital.

Adding insult to HNA’s financial injury, shares in Deutsche Bank have lost more than half their value since HNA started building its stake, hit by worries about its recurring losses, high litigation costs and falling market share in investment banking.

Investor have often puzzled at the logic behind China’s purchase of DB share, with HNA’s overarching strategy behind the Deutsche Bank stake never becoming clear. Meanwhile, banking supervisors in Europe have felt uneasy about the complex financing structure for a while, as it allows the group to exert corporate control while employing very little capital.

To be sure, HNA has long been a controversial shareholder for Deutsche Bank. Former CEO John Cryan initially refused to meet with its executives; he eventually relented when the issue fueled tensions with Deutsche Bank Chairman Paul Achleitner, who was personally involved in wooing the investor.

Shortly after the Chinese conglomerate built its stake, Austrian investor and HNA confidant Alexander Schütz joined Deutsche Bank’s supervisory board. Mr Schütz, who heads the C-Quadrat group through which HNA holds its stake, got a five-year extension of his term at Deutsche Bank’s annual shareholder meeting in May last year.

As a reminder, HNA plans to dispose of its entire stake in Germany’s largest lender according to prior reports.

As for Deutsche Bank whose shares continued to plumb all time lows, the fact that its largest investor has continued to trim its holdings and is now down nearly 40% from its peak, and will continue to do so until it is fully out, will hardly generate much buying interest for what was Europe’s worst major stock in 2018. Following recent earnings, and a recent dovish U-turn by the ECB which has collapse Europe’s rate hike odds not to mention the bund yield curve, 2019 isn’t looking any better.