Bulls not only returned to the scene of the crime, they trampled all over it by re-entering the consolidation range of October – December. Bottom decelerations are made daily and with a Fed busy signaling patience and positive China trade war headlines juicing markets almost daily now volatility has again been crushed and the panic of December is long forgotten. 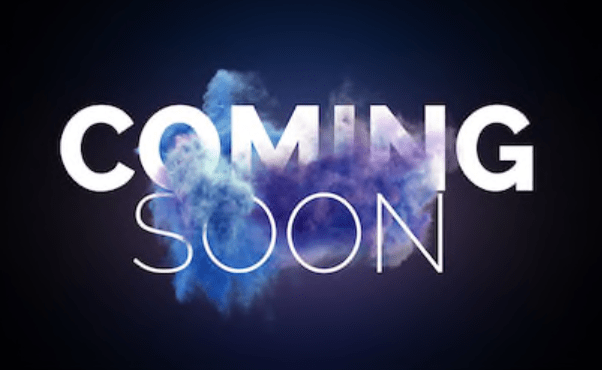 Last week I suggested: “For now markets have still room higher as many charts are not anywhere near overbought on the daily or weekly time frames, but this rally has not yet been tested”.

And that’s the key phrase here: This rally has not been tested and it’s my premise that it will. On Friday I outlined some reasons why it will in Stay Alert and today I’ll dig a bit deeper as to the technical reasons why this rally will get tested. Whether this test will end up being a technical retrace, a full retest, or even new lows is way too early to determine, but let’s look at the charts for evidence.

Firstly, why is it way too early to call a confirmed long term bottom?

Consider the context of where all this bottom calling is taking place: Below the 200MA. Since most if us have probably forgotten what evolving bear markets look like here’s a historical clue: The most vicious counter rallies take place from steep drops below the 200MA:

During evolving bear markets steep drops below the 200MA have historically resulted in aggressive counter rallies that ended near or at a retest of the 200MA. In this context what we are witnessing here is consistent with that historic script.

During the period between the 2009 lows and the 2018 top steep drops below the 200MA were saved by central bank intervention. Nevertheless the retests of the 200MA proved initial resistance before moving higher.

Given this history a truly confirmed bottom would need to see a move above the 200MA and a successful retest of that MA before a new bull market phase can be confirmed. Something like this:

Hence, from my perch, it is way too soon to be calling anything here.

What this rally has done so far is successfully ticked off several check boxes, mainly MA reconnects, some gap fills and an approaching of previously broken trend lines.

Recall that the action in 2018 has inflicted severe technical damage on markets and the current presumption that this damage no longer matters may be premature.

Even recent strength with transports for example is taking place below its broken trend line: 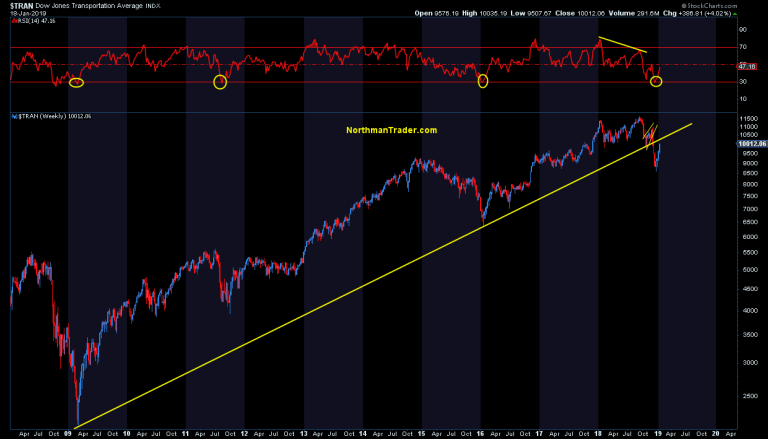 And looking at the larger market structure is still falls inside the historical topping script: 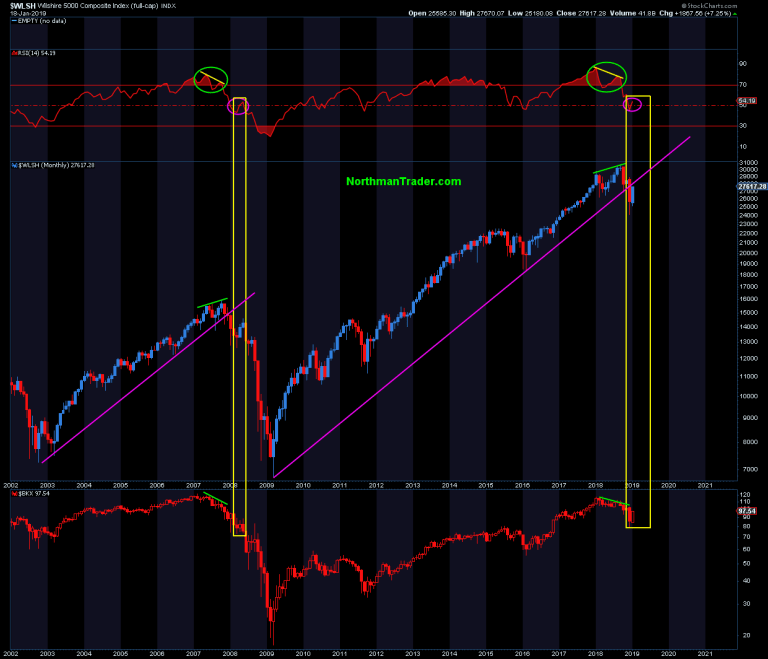 So what’s the evidence that a retest of some sort is coming? 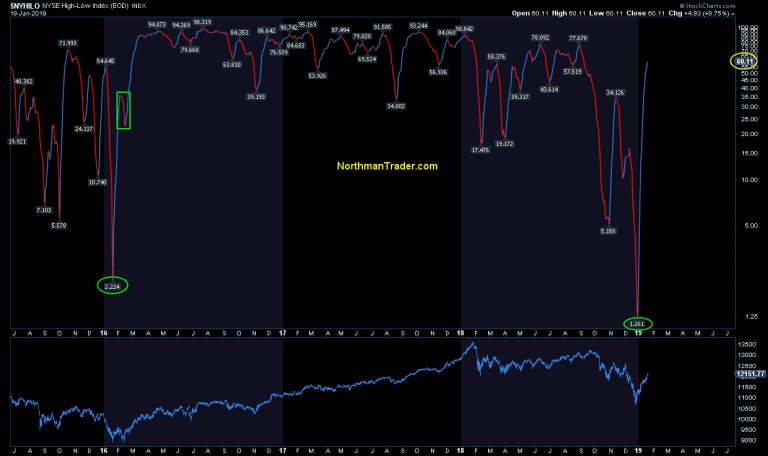 From 1 to 60 in a straight line. We’ve seen a similar move during the 2016 lows, but then a retest emerged which was ultimately a buy as central banks stepped in in a big way. We’ve not had a retest of any sort yet, but technically it would not surprise.

$BPNDX has now approached its highest RSI readings since the last summer: 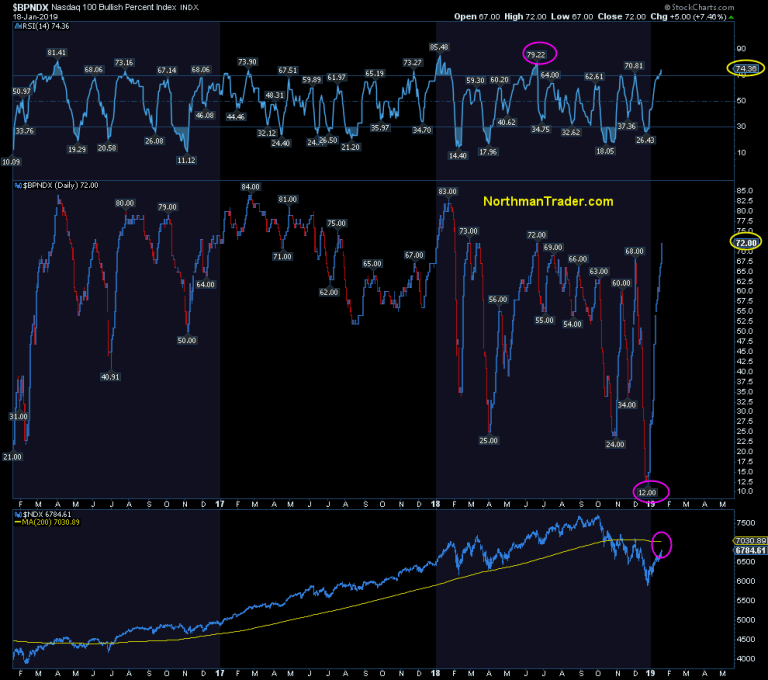 And it’s reaching these overbought readings while still being below the 200MA and while approaching its broken trend line as outlined earlier. Just saying.

An aggressive move off of oversold conditions is not unusual. $USHL also provides notable historical context: 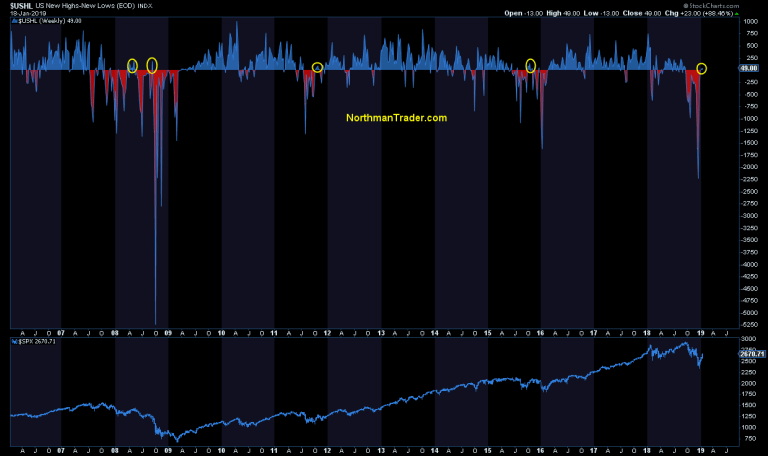 Deep negative runs in $USHL tend to produce aggressive counter rallies that bring $USHL back to positive, in many cases however only very temporarily before a retest or new lows emerge. This rally has now achieved this. A slight positive reading. It has room higher still, but a renewed turn toward negative is consistent with major counter rallies. Even during the big bull run we saw such turns in 2011 and 2015/2016.

Also of note: $XVG equal weight has reached its breakdown zone and could prove to be major resistance: 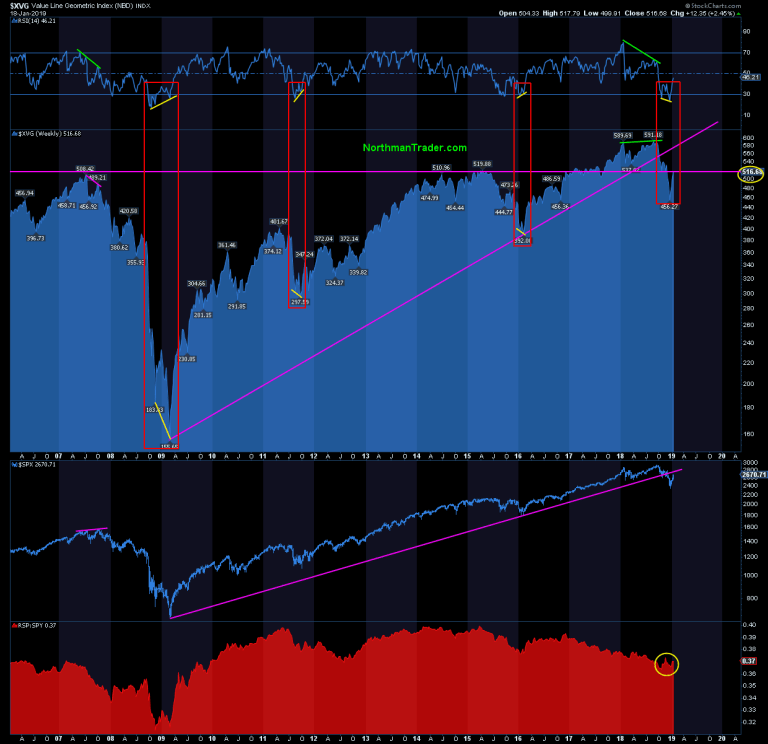 $SPX has approached its monthly 5EMA a previous bastion of support: 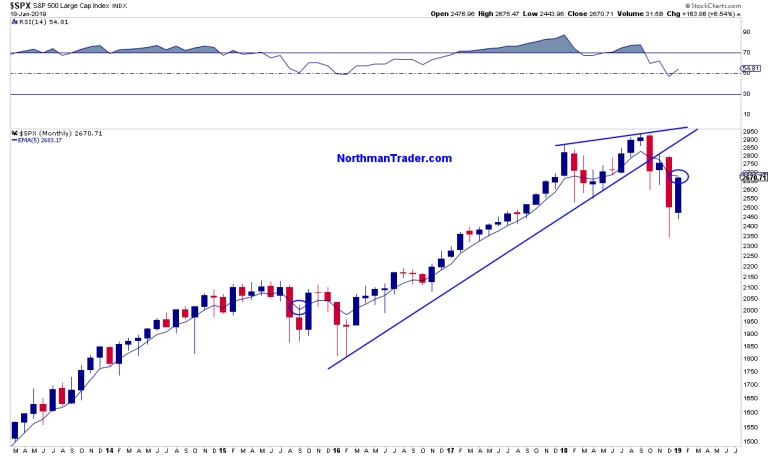 And $SPY is approaching the infamous monthly 15MA we’ve discussed in The Big Question: 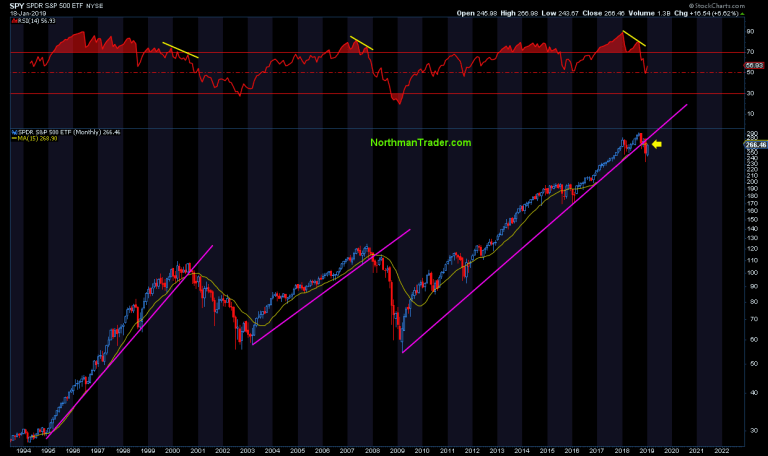 So you see bulls have proven absolutely nothing so far. The proof would be a sustained break above all of these levels. As of now we’ve seen an aggressive counter rally below the 200MA. Congrats. It looks great, but remains entirely consistent with the historic script.

Yet bears need new lows and currently are far from them. Indeed the road to new lows is paved with lots of support scenarios and hence the evolution of the next retest will be key to evaluate.

Indeed, given the steepness of the current advance one could even imagine a massive bullish play, a potential inverse of sorts. Here’s an illustrative example:

Such a scenario could make sense if any retrace stops near what is the current .382 fib based on Friday’s close and the trend line support confluence, say around 2540 in the current setting: 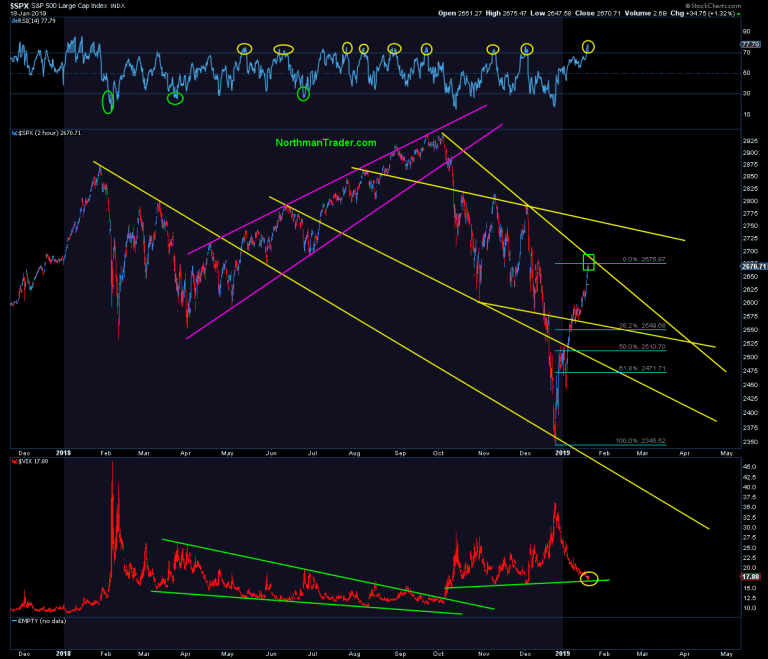 Note $SPX has trend line resistance just ahead, the 2 hour RSI is now overbought and $VIX is at trend line support, a confluence of factors that also suggests that a pullback of size is coming.

There is of course a big problem with the potential inverse scenario and that is this: 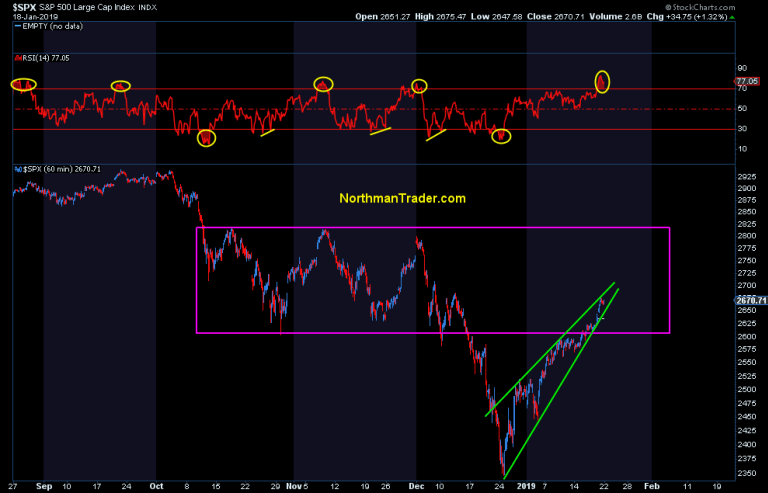 $SPX has been forming an ever narrowing rising wedge and has left multiple open gaps below. Given now overbought conditions with massive resistance ahead this wedge pattern is at high risk of breaking to the downside.

And now it gets interesting. While markets have been busy crushing the $VIX my better half Mella has been spotting a potential very ominous pattern on the $VXX.

In December she spotted the rising wedge in $VXX  suggesting a big market rally was coming: 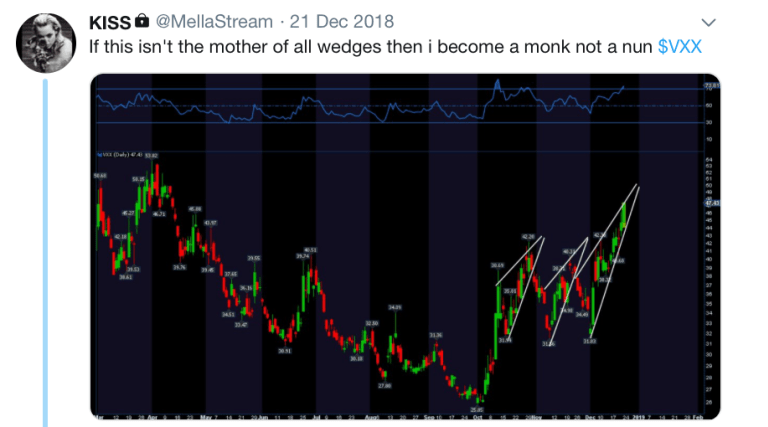 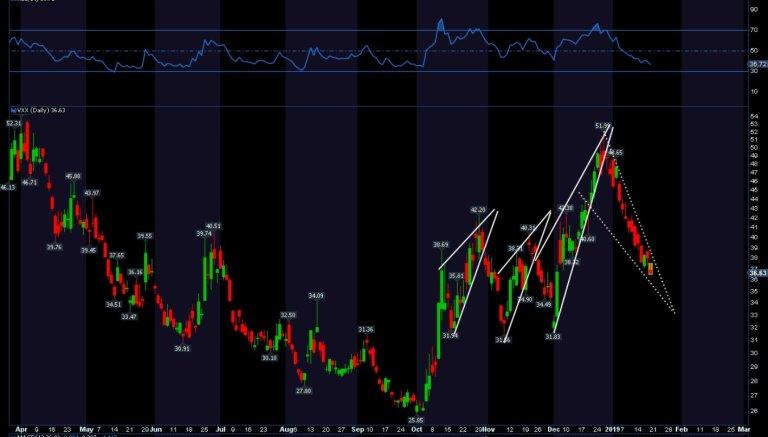 Bottomline: Bulls have proven nothing. The coast is not clear until a successful retest break above the daily 200MA and the monthly 15MA.

Technically markets have followed a historical script with an aggressive counter rally below the 200MA working off historic oversold conditions and have now run into key resistance with further strong resistance above while producing overbought conditions on several key indicators. The combined picture suggests a test of this rally to come. The nature of this test (retrace or full retest) will determine whether this ultimately resolves bullish with a sustained move above the 200MA or sets up for new lows still to come. Plenty of reasons to remain on Alert.