There is no clear catalyst for the sudden shock, but as The Independent reports, the latest rise follows news that bitcoin’s hashrate – the amount of power its network consumes to process transactions and generate new units of cryptocurrency – is at its highest level since November 2018. This can be an indicator of subsequent price gains, though there are many factors that determine a cryptocurrency’s value. 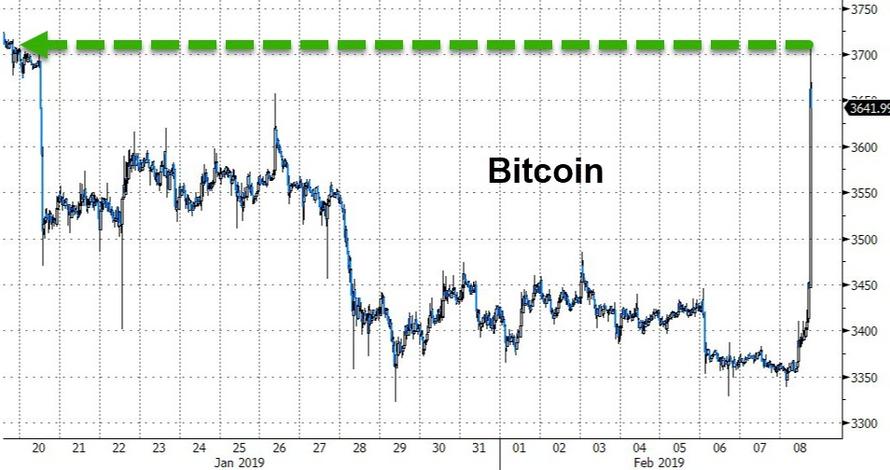 But it was Litecoin (silver to Bitcoin’s gold) that outperformed

Speaking to The Independent before the latest price surge, one cryptocurrency expert lamented the negativity in the market but hinted a spark could set it off in a positive direction once again.

“Cryptocurrency has been comparatively dull by the standards that we have become accustomed to, and for the most part caution and negativity still prevail,” said David Thomas, director of Mayfair-based cryptocurrency broker GlobalBlock.

“Something needs be the catalyst to get things going again. Unfortunately, global uncertainty for a multitude of reasons is driving many to become more risk averse and so whatever that spark is, it needs to be significant.”

However, as CoinTelegraph noted earlier in the week, JPMorgan’s Global Market Strategist Nikolaos Panigirtzoglou says that Bitcoin could make a resurgence on Wall Street, according to an article published by CNBC on Feb 6.

“The stability that we are seeing right now in the cryptocurrency market is setting the stage for more participation by institutional investors in the future,” said Panigirtzoglou,

“The cryptocurrency market was a new market. It went through a bubble phase [and] the burst.”

Panigirtzoglou predicts that firms will show a renewed interest in cryptocurrencies as stability in the market grows and as Bitcoin’s underlying blockchain technology grows more important. He added that a Bitcoin’s resurgence could be years away, as regulators are a “bit slow to realize” the potential of the cryptocurrency.

Twitter’s CEO Jack Dorsey remains optimistic about the future of Bitcoin as it is purportedly the only cryptocurrency that he owns. Dorsey said that Bitcoin had a “great brand” and that, “Bitcoin is resilient. Bitcoin is principled. Bitcoin is native to internet ideals.”

Of course there is always the possibility that panic in Venezuela is setting a bid under the market (as The Independent notes that Venezuelan bitcoin trading volumes reached a record this week).