A highly-edited video making the rounds shows Sen. Dianne Feinstein (D-CA) lecturing a group of climate activist children on Friday, after she was asked to support the Green New Deal championed by the DNC’s “new hotness,” Rep. Alexandria Ocasio-Cortez (AOC). 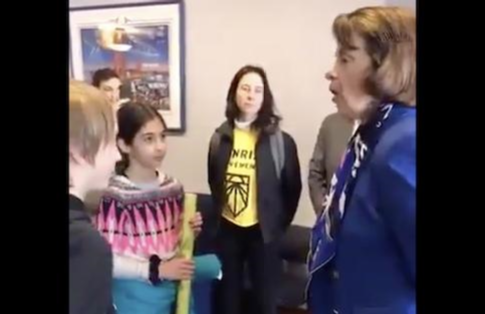 The Senator responded: “Ok, I’ll tell you what. We have our own Green New Deal.”

The video skips forward to the children warning Feinstein that “some scientists have said that we have 12 years to turn this around” – referring to a conclusion by a recent UN-backed report that man-made climate change will become irreversible if carbon emissions are not significantly reduced over the next 12 years (which Ocasio-Cortez turned into “the world is gonna end in 12 years if we don’t address climate change“).

“It’s not gonna get turned around in 10 years,” responded Feinstein – drawing a harsh rebuke from an angry chaperone.

“Senator if this doesn’t get turned around in 10 years you’re looking at the faces of the people who are going to be living with these consequences,” said the adult – as one of the children chimed in “the government is supposed to be for the people and by the people and for all the people!”

Feinstein was not amused.

I’ve been doing this for 30 years. I know what I’m doing. You come in here and you say “it has to be my way or the highway.”

“I don’t respond to that,” shot back Feinstein.

“I’ve gotten elected. I just ran. I was elected by almost a million vote plurality. And, I know what I’m doing. So, you know, maybe people should listen a little bit. -Dianne Feinstein

One kid shot back “I hear what you’re saying but we’re the people who voted you. You’re supposed to listen to us, that’s your job.”

“How old are you?” challenged Feinstein.

“Well you didn’t vote for me,” replied the Senator.

This is how @SenFeinstein reacted to children asking her to support the #GreenNewDeal resolution — with smugness + disrespect.

This is a fight for our generation’s survival. Her reaction is why young people desperately want new leadership in Congress. pic.twitter.com/0zAkaxruMI

One can hardly blame Feinstein for her annoyance at a pack of children forcing her to support the Green New Deal at camerapoint, as the senior Democrat appeared to win by a nose in the court of public opinion.

Me watching Feinstein vs the brainwashed child army pic.twitter.com/chTUaJY54d

If you had “Twitter rallying around Sen Feinstein” on your bingo card tonight, just take your $15 gift certificate to Shoney’s and go home victorious.

This is politically incompetent of her, but honestly if I had kids I would hire Feinstein to babysit them every once in a while just to keep them in their place. https://t.co/BHU9ZVVX0E

Hahah. Feinstein just laid the smack down on children. The kids are obviously pushing a stupid bill, but damn… she was just not here for their shit.

I don’t know why I find this so hilarious. She’s like Miss Trunchbull. https://t.co/fMjzCN4Giv

Okay, I’ve watched the Feinstein vs. Green New Deal kids video approximately 12 times in the last two hours and I am not at all ashamed to admit that every time it made me laugh til I cried. What an age we’re living in where someone can make me sympathize with Dianne Feinstein…

She probably didn’t score too many points with younger Democrats, however.

Everyone knows its good politics to tell little kids to fuck off https://t.co/5DXVQRbDmQ

very disappointed in these kids. senator feinstein is an esteemed member of the senate who has voted for more iraq wars than all your parents combined. do you even know what a joint military resolution is you little shits https://t.co/j0XExJP7K3

The full version of the video reveals that it was actually a mostly cordial visit.

Perhaps the most on-point reaction comes from The Hill‘s Buck Sexton:

Want to be very clear about this:

whether it’s on guns, or climate change, or any other policy issue-

NOBODY should give a crap what 12 year olds think. It’s not cute, it’s not compelling. It’s the babbling of children.