Via The Zman blog,

There has never been a time when normal people did not know the media was biased and biased in a predictable direction. For every non-liberal in the media, there were at least ten liberals. The ratio was probably higher, but then, as now, some lefties liked to pretend they were independents or some third option. 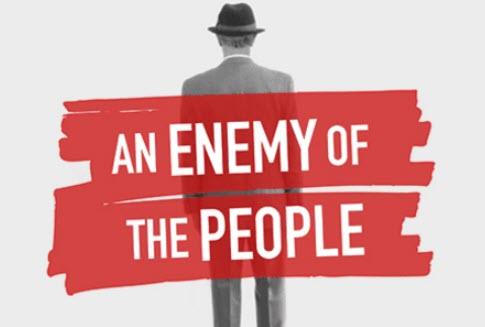 The thing is though, the media seemed like it was biased in a predictable way.

In the 1980’s, for example, the newspapers featured stories about the so-called homeless crisis on a weekly basis. That’s when we went from calling them bums to pretending their only problem was a lack of shelter. Once Clinton assumed power, the homeless stories disappeared. It was a running joke for a long time, because it was so obvious, but also because it was so predictable. Everyone got the joke, except Lefty.

As many have observed, the mask began to drop during the Clinton years when so many media members quit their jobs and went to work in the administration. It’s hard to maintain the illusion of independence when there is a revolving door between the media and left-wing political operations. That’s when CNN became known as the Clinton News Network, because they were so hilariously in the tank for them. Some tried to maintain the ruse, but any pretense of objectivity ended in the 1990’s.

Again, there was still a sense that it was just bias and that it was predictable and therefore you could adjust for it. Today, that does not appear to be the case. The mainstream media has become advocates, but not necessarily advocates for the Progressive base of the Democratic coalition. They seem to be serving the agendas, financed by private parties operating off-stage. For example, sites like the Huffington Post and Daily Beast are about moral enforcement than news and current events.

The recent harassment of Alex McNabb by Antifa member Christopher Mathias is a great example of the phenomenon. The Huffington Post provides him with a cover identity as a reporter, but in reality someone else is paying his way. His job is as a witch hunter, looking for anyone in violation of the blasphemy laws. This is a strange new phenomenon that does not have a corollary in the past. Even Woodward and Bernstein were legitimate reporters, even if Woodward had deep connections to the intelligence community.

There’s an argument that this sort of religious advocacy is the natural result of the narrative journalism that evolved in the 1960’s and 1970’s. If you are going to report stories, the point is to inform. If you are going to spin tales, then the first goal is to entertain and there is nothing quite as a gripping as a morality tale. These doxxing stories are just campfire stories for the hard thumping loons of the far Left. The point of them is to tell the reader that they must be vigilant as heretics are everywhere.

That’s probably true, but what about stories like this one, where it is clear the New York Times now has a whole department involved in explicit political advocacy. That is a highly organized effort to alter public policy. More important, it is a long term project, going back to the Obama years. The New York Times posted a database of gun owners, with an accompanying map, in a campaign to terrorize gun owners. This goes well beyond bias and even past the morality tales spun by the Huffington Post.

It does not stop there. This story about the death of Saudi national Jamal Khashoggi takes advocacy to another level. As an aside, the story is written by Lee Smith, who was fired from The Weekly Standard by Bill Kristol. His crime was having uncovered Kristol’s involvement in the fake dossier the FBI was using to subvert Trump. The story of Khashoggi’s life and death reads like a Hollywood spy thriller, but it was not a CIA caper. It was an operation apparently run by the the Washington Post.

We’ve come a long way from simple bias. The same media that can’t stop talking about Russian efforts to trick voters into voting the wrong way, was running a covert operation to trick the government into supporting Iran over Saudi Arabia. Unlike the Russians, the Washington Post actually killed someone or at least got someone killed. Unlike the Trump team, the Washington Post was actually working with a foreign country that is often viewed as hostile to American interests.

Trump started calling the media the “enemy of the American people” but he seems to have dropped it for some reason. Maybe the media threatened him. Given what we are seeing, how long before Washington Post reporters are planting car bombs and spiking drinks with polonium? Whether or not they see Americans as the enemy is hard to know, but they certainly don’t see themselves as on the same team as Americans. While they may not be the enemies of the people, they are a short bus ride to that position.