Update3: Patrick Hope, a Democratic member of the Virginia House of Delegates, tweeted on Friday that he will be introducing articles of impeachment if Fairfax hasn’t resigned by Monday.

On Monday, I will be introducing articles of impeachment for Lt. Governor Justin Fairfax if he has not resigned before then.

The multiple detailed allegations against the Lt. Gov. of Virginia are deeply troubling. They are serious, credible, and corroborated by others. It is no longer appropriate for him to serve. He should resign.

Meredith Watson, a friend of Fairfax’s at Duke University when they were both undergraduates, alleges that Fairfax raped her in a “premeditated and aggressive” assault in 2000.

Speaking through an attorney, Nancy Erika Smith, Wilson said that she shared her claim immediately after it happened with several classmates who have provided statements, while her lawyer added that Wilson shared her account with friends in several Facebook messages and emails.

Smith said the details of Watson’s attack are similar to those described by Tyson.

Kaneedreck Adams, 40, an attorney who attended Duke with Watson and said in the spring of 2000, when they lived across from each other in on-campus apartments, Watson came to her crying.

“She was upset,” Adams said. “She told me she had been raped and she named Justin.” –WaPo

Watson’s statement is as follows:

We serve as counsel for Meredith Watson, who was raped by Justin Fairfax in 2000, while they were both students at Duke University. Mr. Fairfax’s attack was premeditated and aggressive. The two were friends but never dated or had any romantic relationship.

Ms. Watson shared her account of the rape with friends in a series of emails and Facebook messages that are now in our possession. Additionally, we have statements from former classmates corroborating that Ms. Watson immediately told friends that Mr. Fairfax had raped her.

Ms. Watson was upset to learn that Mr. Fairfax raped at least one other woman after he attacked her. The details of Ms. Watson’s attack are similar to those described by Dr. Vanessa Tyson.

At this time, Ms. Watson is reluctantly coming forward out of a strong sense of civic duty and her belief that those seeking or serving in public office should be of the highest character. She has no interest in becoming a media personality or reliving the trauma that has greatly affected her life. Similarly, she is not seeking any financial damages.

On behalf of our client, we have notified Justin Fairfax through his attorneys that Ms. Watson hopes he will resign from public office.

According to the Washington Post, Fairfax’s spokeswoman, Lauren Burke, said “we’re calling for an investigation on all of these matters,” adding that Fairfax would respond at a later time. 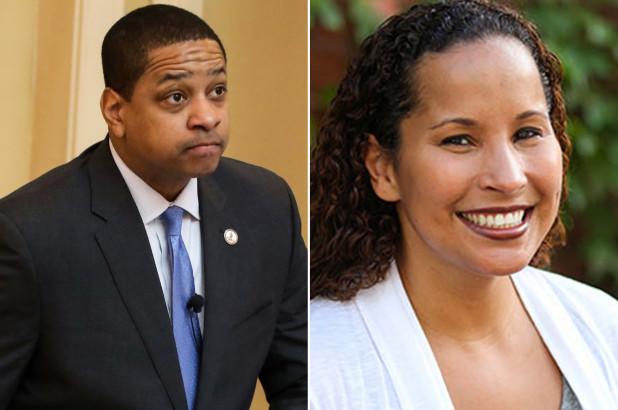 His accuser, Dr. Vanessa Tyson, said in a written statement she was attacked by Fairfax during the 2004 Democratic National Convention when Fairfax forced her to perform oral sex on him in a Boston hotel room, when consensual kissing that was “not unwelcome” became an unwanted act.

As the accusation began to pick up steam, Fairfax reportedly said “Fuck that bitch” in a private meeting, according to NBC News’ Kasie Hunt, citing two sources.

Imagine if Brett Kavanaugh said that about Christine Blasey Ford?

Tyson, an associate professor of politics at Scripps College in Clairemont, California, reportedly told five friends about the incident over a two-year period, according to the New York Times, citing separate interviews she gave Thursday and Friday.

What’s more, over 740 academics have signed a letter of support for Tyson, according to Purdue University political scientist Nadia E. Brown, who organized the letter. Meanwhile, a GoFundMe account set up by a political scientist at Menlo College in California has raised over $22,000 as of this writing.

“Everything she said in her statement was exactly what she told me when we talked,” said Diane Rosenfeld – founding director of the Gender Violence Program at Harvard Law School, who says Tyson told her of the assault in December, 2017.

“She’s not doing this for any fame,” added Rosenfeld. “She’s not suing him for money, so disbelievers and doubters can’t say, ‘Oh, she just wants money.’ She just wants, as she says, the Virginia voters to know who this person is.”

Dr. Tyson’s account was also partly corroborated late Wednesday night by Representative Bobby Scott, Democrat of Virginia, whose aides said Dr. Tyson told the congressman a year ago that she had made an allegation of sexual assault against Mr. Fairfax, without offering details. –NYT

Given the specific, serious and credible accusation against Fairfax, the silence on the left is deafening – considering that just months ago prominent Democrats such as Cory Booker and Kamala Harris jumped on the “Believe all women” bandwagon for nebulous claims against then-Supreme Court Nominee Brett Kavanaugh.

Booker – clearly grandstanding for his upcoming 2020 bid for the White House, threw a tantrum in a self-described “Spartacus moment” when he released old emails from Kavanaugh to other Judges discussing racial profiling, which backfired spectacularly when they revealed Kavanaugh was against the practice. The New Jersey Democratic Senator (who was accused of sexually assaulting a man in a bathroom in 2014 and recently materialized a girlfriend), all but led the charge against Kavanaugh over the sexual assault claims during the Justice’s confirmation hearings.

When asked about the allegation against Fairfax, Booker ducked the question – saying “I think we should be focusing on what’s right now happening with the Governor. I know you guys are going to try to focus on a lot of things right now, but right now my focus is on again calling for the Gov. to step down.”

Senator Booker on the allegation against Lt. Gov Fairfax:
“I think we should be focusing on what’s right now happening with the Governor. I know you guys are going to try to focus on a lot of things right now, but right now my focus is on again calling for the Gov. to step down.

Meanwhile, the DNC’s “rising star,” Alexandria Ocasio-Cortez similarly ducked questions over Fairfax, claiming she hasn’t looked into the situation “at all.”

.@AOC asked about #JustinFairfax allegations in VA. Response: “Haven’t Look At All Into The Situation” pic.twitter.com/pQF0uhe5nd

Senator Kamala Harris has been a bit smarter about her response – admitting that Tyson’s accusations are credible and should be investigated – but falling short of calling for his resignation.

She threw Kavanaugh under the bus!

Indeed, prominent Democrats have been largely silent on the accusation against Fairfax – ducking questions or feigning ignorance, or both.