The TBAC’s laments about declining foreign interest (and buyers)  for US Treasurys will only get louder after today’s sale of 2 Year Treasury paper.

While on the surface, the auction of $40 billion in 2Y paper was not bad, with the High Yield stopping through the When Issued, pricing at a high yield of 2.503%, the lowest since last April as the market increasingly discount the Fed’s upcoming rate cuts, the internals said a very different story.

First, the bid to cover of 2.505 was a modest drop from January’s 2.564%, and below the 6 auction average of 2.59, the striking print was in the Indirect take down, which plunged from 53.4% to just 38.6%: this was the lowest purchase by foreigners in the auction going back to December 2016 when Indirects took down just 32.7%. And with foreigners stepping back it meant that Directs had to step up, and they did taking down a whopping 22.6%, the highest since August 2016, while Dealers were stuck holding 38.8%, sharply higher than January’s 27.50% if in line with the 6 auction average of 40.2%

In summary, while the auction came in largely as the market expected, the internals showed a continuation of the troubling trend where foreigners continue to shirk away from purchasing US paper at auction, which should the trend accelerate could pose a problem to the US Treasury which hopes to issue a net $1.1 trillion in new paper this year to fund a fiscal program whose tail wind benefit to the US economy has now come and gone. 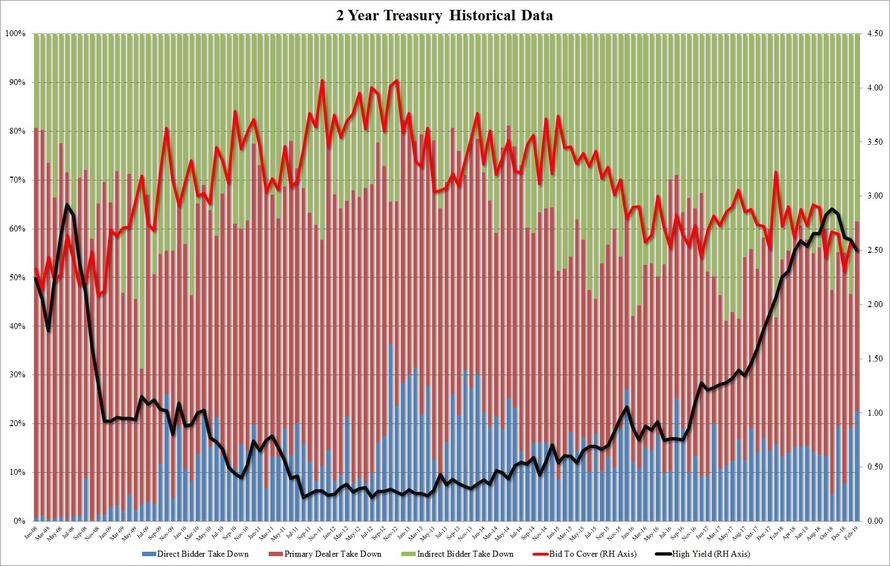