Authored by Martin Tarlie via GMO,

A new model – the Bubble Model – explains this dichotomy between price action and fundamentals by suggesting that a bubble in the U.S. stock market started inflating in early 2017, and continued to inflate through the third quarter of 2018. In the fourth quarter, however, indications were that the bubble had started to deflate.

And when bubbles deflate, they generally do so with a volatility bang. In this new model, bubbles are prone to form when times are good and expected to get even better. Good times today and even better times ahead are reflected in high valuations and solid fundamentals that continue to improve. Improving fundamentals lead to positive changes in sentiment, and these positive changes in sentiment fuel the bubble.

However, sentiment cannot increase forever. When change in sentiment – not level – inevitably turns negative as hopes of even better times ahead are dashed, there is nothing left to fuel the bubble…

While there are indications that the bubble started to deflate in the fourth quarter of 2018, and the magnitude of both price action and the change in the quantitative measure of euphoria that defines the Bubble Model suggest that the odds are now tilted in favor of the view that this is the beginning of the end of the bubble, we would be well-advised to remember Yogi Berra’s counsel that “It ain’t over till it’s over.”

Past bubbles do exhibit “head fakes” in which bubble deflation is interrupted by a secondary growth event. For example, in the third quarter of 1998, the time of the LTCM crisis, the Bubble Model suggested the bursting of the bubble that had started inflating in early 1997. However, the 1998 reading was a head fake, and the bubble continued to grow for another 18 months before finally popping in early 2000.

… The Bubble Model, which focuses on the dynamics of valuation, captures both the quantitative and anecdotal euphoric elements of a bubble. Euphoria manifests as explosive dynamics, expressed quantitatively as a negative mean reversion speed. Because the model is quantitative, it does not suffer from the subjective uncertainties inherent in anecdotal stories. While most of the time valuation is mean reverting, on rare occasions valuation is temporarily explosive, or mean averting. This mean aversion goes hand in hand with expensive valuation and is the defining characteristic of a bubble… 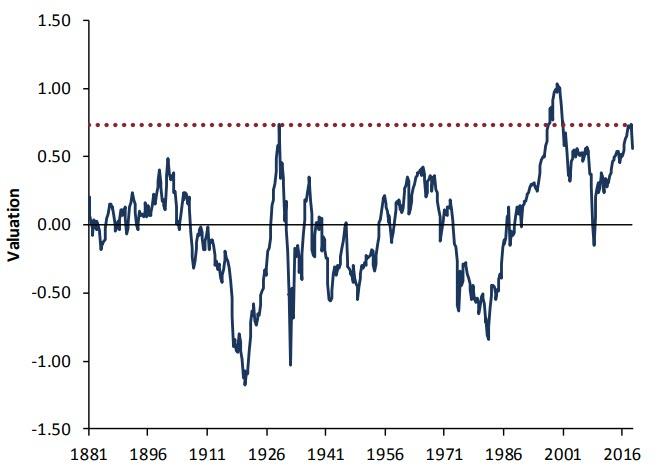 Mean aversion, or explosive dynamics, arises when speculators dominate the market. Speculators are subject to fads and fashion and have a tendency to follow the herd. Their demand for stocks is ephemeral. Fundamental investors, on the other hand, assess value based on fundamentals and expected return considerations. Their demand for stocks is relatively stable. To the extent that fundamental investors dominate the market, fundamental value provides an anchor around which market prices vary. This is standard mean reversion.

The fifth period of explosive dynamics, shown as a close-up in Exhibit 3, begins in 2017 and extends into late 2018. The mean aversion from early 2017 through the third quarter of 2018 is a quantitative measure of euphoria and suggests that during this period a bubble is inflating in the U.S. stock market, even though this period lacks the conventional anecdotes of euphoria, such as barbers and shoe shiners turned stockbrokers. And while such anecdotes appear lacking, the optimism and enthusiasm surrounding Big Data, Artificial Intelligence, and Bitcoin, among other technological advances, are typical of bubble-like animal spirits. 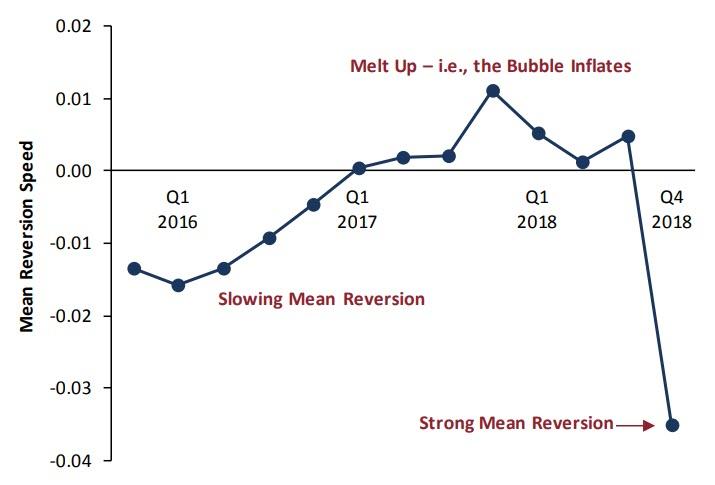 The data point for the fourth quarter of 2018 shows a dramatic change in the mean reversion speed, from an explosive, mean averting phase to a strongly mean reverting phase. The scale and duration of this move is consistent with the moves associated with the bursting of the 1929 and 1999 bubbles, and the reflation of the anti-bubbles of the late 1910s and the early 1980s.

Exhibit 4: Valuation and Euphoria, the Two Elements of a Bubble 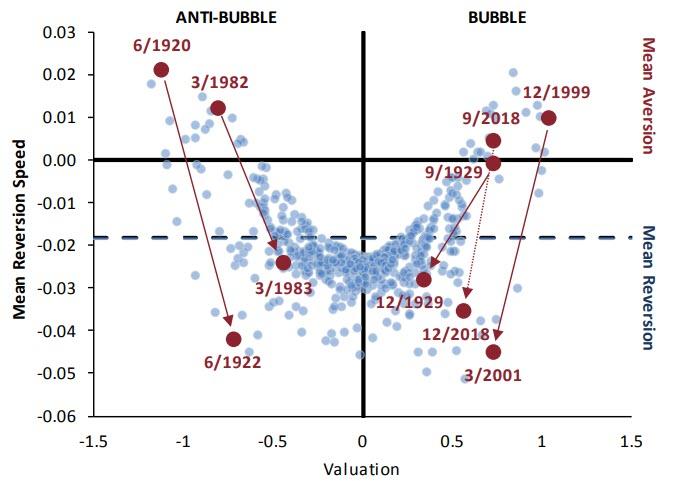 So, what do we learn?

Own as little U.S. equity today as your career risk allows

The Bubble Model teaches us that bubbles form when times are good – high valuation – and expected to get even better – changes in sentiment are positive. Bubbles burst when changes in sentiment – not level – turn negative. This dynamic helps us understand how it is that during the fourth quarter of 2018 the market fell dramatically, even though fundamentals, both past and expected, looked solid. While as of December, 2018 expected EPS growth for 2019 is 12%, this is substantially below the 28% growth of 2018. Furthermore, since August, 2018 estimated EPS for 2019 has been revised downward by more than 4%. These changes, together with concerns about Federal Reserve tightening and trade tensions with China, point to negative changes in sentiment, a catalyst for popping a bubble.

The key role played by changes in sentiment also highlights why it is so difficult to time a bubble. While the benefit of successfully riding a bubble and getting out in time is obvious, there are two reasons why this is a challenge.

There is another subtle, but important point. I have been deliberately vague about what sentiment means. In Tarlie et al. (2018) the catalyst for both bubble formation and destruction is expected change in profitability. But more broadly we expect that change in sentiment is the catalyst, which is to say that there are myriad factors that can ignite animal spirits as the bubble forms, and then snuff them out as hopes for even better times ahead are dashed. Effectively, this vague definition reflects model risk. So even though we have a model that helps us understand how bubbles are created and destroyed, unfortunately it does not help us predict the timing of their demise. It does, however, give us insight into why timing is so challenging.

Our advice when the bubble is inflating is to avoid the siren song of buying into rising prices, thus avoiding the bubble altogether. While career risk can make this course of action difficult (hence giving further life to the bubble, of course), we believe the challenge of successfully timing the exit is such that bearing the career risk is the wiser and more prudent course for those with a sufficiently long time horizon.

Currently, we are faced with a volatile market that, through the end of 2018 at least, is down double digits from the September, 2018 peak. The volatility is consistent with a bubble bursting, though we caution that it is possible that the fourth quarter move in the mean reversion speed could be a head fake. While the dramatic nature of the move in the mean reversion speed to such strong mean reversion suggests that the odds are tilted toward this being the beginning of the end of the bubble of 2017-18, we cannot rule out reflation of the bubble, analogous to the event of late 1998-2000. Given that valuation is still high, our advice, consistent with our portfolio positions, is to continue to own as little U.S. equity as career risk allows.