In a world of record wealth inequality, many believe that one of the fringe benefits of the rich getting richer and the poor staying, well, poor is that consumption has become less sensitive to moves in stock prices because of the lower spending propensity of wealthy households, in other words, the “wealth effect” has become increasingly muted (after all remember, “The Rich Hold Assets, The Poor Have Debt“). 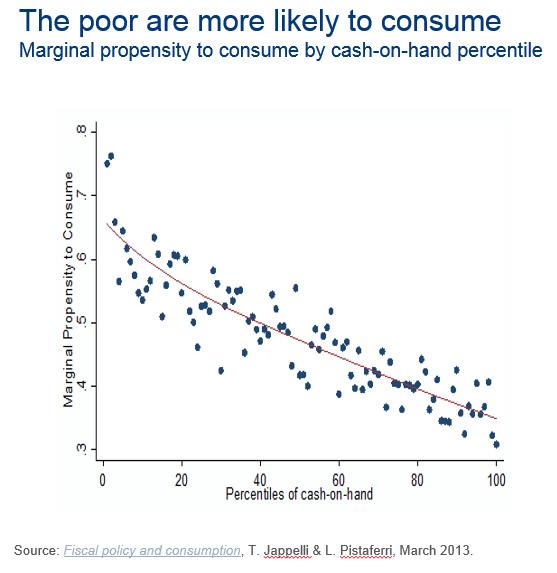 The claim, proposed for example by the NBER in 2013, is that declines in equity prices now translate into smaller declines in consumer spending than in the past, because wealthy households now bear a larger share of the losses and have lower propensities to spend. In other words, if the wealth effect has indeed fallen, it would be one reason to expect only a modest drag on consumer spending from the recent sell-off.

If this is correct, it would imply that the recent stock market sell-off is likely to weigh only modestly on consumption.

However, in a new report from Goldman’s economists, the bank disagrees with cheerful take and believes that once America’s rich see their latest, and sharply reduced brokerage statements, they too will cut back on spending, adversely impacting the broader economy, for two reasons:

First, while the share of equities owned by the wealthiest households has risen over the last three decades, equity holdings have more than tripled as a share of disposable income at the aggregate level and have also risen substantially for middle and upper-middle wealth groups. Therefore, a 1% move in stock prices now has a much larger impact on wealth levels for most groups.

To be sure there is no arguing that the rich have gotten richer, or as Goldman puts it, “stock ownership has become more concentrated.” Indeed, the wealthiest 0.1% and 1% of households now own about 17% and 50% of total household equities respectively, up significantly from 13% and 39% in the late 80s. 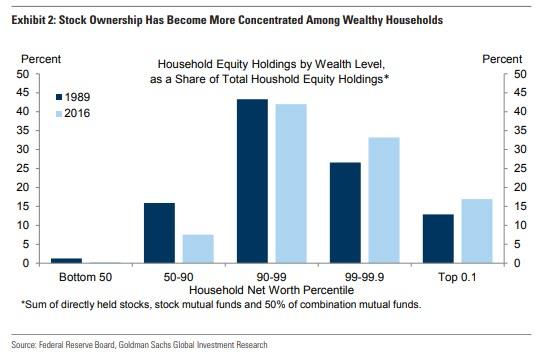 Furthermore, as the left panel of the next chart shows, household equity holdings have more than tripled as a share of disposable income at the aggregate level since the late 80s. Combining these aggregate holdings with the group-level ownership shares from the chart above, it emerges that equity holdings as a share of income have risen substantially for not only the upper-middle and upper wealth groups, but also the “middle”.

Therefore, according to Goldman, “the hit to the wealth level from a 1% decline in stock prices is now about 3 times larger than in the late 80s for the top-10% of households and a third larger for those in the 50-90th percentiles.” The hit is even greater if one includes household holdings through pension funds and life insurances, which now stand at 30% and 10% of disposable income respectively.

The Second reason why Goldman is concerned about the impact of sliding stock on the propensity to spend is that equity price moves also have a meaningful effect on the spending of wealthy households. Goldman finds evidence for this claim in that spending on luxury goods largely purchased by wealthy households is highly sensitive to stock prices.

As evidence, Goldman presents the next chart which shows that equity price moves do have a meaningful effect on the spending of wealthy households: the PCE share spent on jewelry and watches is highly correlated with moves in the stock market (left panel). Using regressions of spending growth on stock price changes, Goldman confirms this strong relationship more formally for jewelry and watches, pleasure boats and pleasure aircrafts (right panel). Intuitively, it does make sense that even the top 0.01% will spend less on “pleasure boats and pleasure aircrafts” if they are watching the market go down in flames. Curiously, this correlation has only increased in the past two decades when the market sprinted higher because when focusing on a sample since 1995, the bank found large effects of the stock market on luxury spending while the effects are actually weaker in earlier decades. 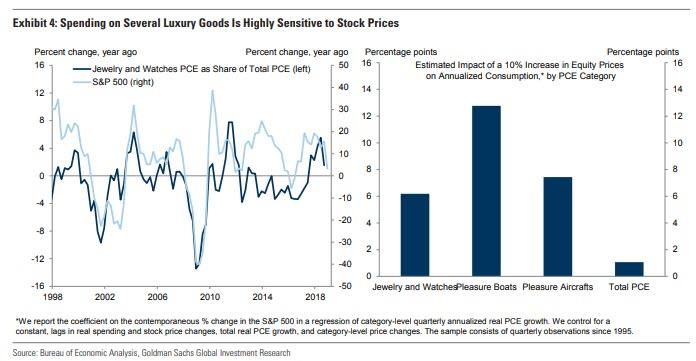 In other words, Goldman’s analysis suggests that the wealth effect from the stock market is unlikely to have fallen substantially over the past 30 years despite the rise in wealth inequality because i) equity holdings have risen sharply, and especially for the richest Americans, and ii) because equity price moves still have a meaningful effect on the spending of wealthy households.

As a result, Goldman summarizes that “a 1% move in stock prices now has a much larger impact on wealth levels for most groups” and finds that the since the wealth effect is alive and well – much to the delight of former Fed Chair Ben Bernanke who in an WaPo op-ed explicitly advocated artificially boosting the stock market to stimulate the “wealth effect” – and by implication, there is now a substantial negative wealth effect on real PCE, which Goldman expects to slow to 2¼-2½% this year, despite healthy labor income growth, an elevated saving rate, and cheaper oil.

As a result of this analysis, Goldman concludes that stock market wealth effects, i.e. a continued drop in equities, could subtract about 0.5% off real GDP growth this year, a number which will only grow as stocks continue to slide, and is – some could argue – the most salient reason why the Fed’s put was triggered at around 2,300 because any further drops would have had a significantly adverse impact on the economy.