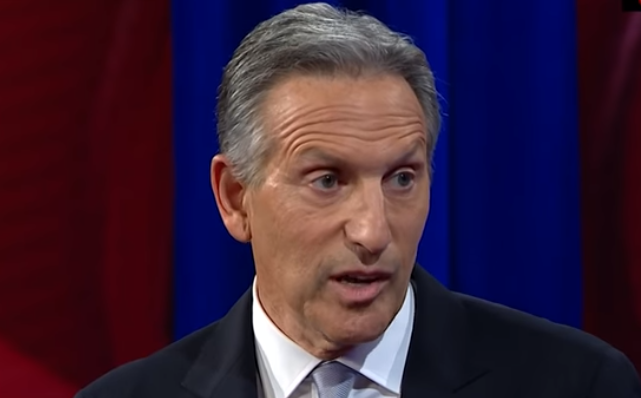 Speaking at a CNN town hall, Schultz – the billionaire Starbucks Chairman Emeritus suggested that Democrats be “truthful” about their environmental goals instead of just throwing ideas “against the wall because it’s a good slogan.”

“I read that by 2030 they’re suggesting that every building in America becomes clean energy, conforms to clean energy, just to put that in perspective, because it’s not realistic, that would mean that between 2,000 and 3,000 buildings a day would have to be reconstructed to conform to what they’re saying,” Schultz said. “So let’s be sensible about what we’re suggesting.”

Lifelong Democrat Howard Schultz on the Green New Deal: “It’s not realistic…let’s not just throw stuff against the wall because it’s a good slogan. Let’s be truthful” pic.twitter.com/mNusZkHRiy

Schultz, a spoiler candidate who pledged to drop out if it becomes clear he wouldn’t be able to win the 2020 election, also knocked grandiose job guarantees in the Green New Deal.

Howard Schultz rips the Green New Deal: “I don’t understand how you’re going to give a job for everybody…give free college to everybody…create clean energy throughout the country in every building of the land and then tally this thing up with $32 trillion on Medicare for all” pic.twitter.com/6jKSsl7WKh

On Tuesday, Senate Majority Leader Mitch McConnell (R-KY) had some fun – rushing the “Green New Deal” resolution up for a vote in the Senate, forcing some Democrats to take a position on the controversial legislation.

“As somebody who grew up in a very diverse background as a young boy in the projects, I didn’t see color as a young boy and I honestly don’t see color now,” said the billionaire, responding to an audience question about an April 2018 racial profiling incident which took place in a Philadelphia Starbucks store after the manager called police on two black men who were waiting for a friend.

“Injustice in America of any kind — especially racial injustice, which continues — is not something that we should be proud of and we need to resolve,” said Schultz, when asked if he thought the incident would be an issue for voters, adding that the Philadelphia incident was “something that we learned a great deal from,” adding “We realized that we had a problem. And it’s a problem that I think exists widely in this country, and it’s something that I would characterize as unconscious bias that many of us have based on our own life experiences.”

“We have to be able to have uncomfortable conversations. We have to talk to people who are different than ourselves,” said Schultz. “We have to embrace the diversity of the nation.”

Watch the full town hall below: