Israel Defense Forces (IDF) conducted a massive military exercise last week which was designed to prepare soldiers for combat operations in “topographical conditions” comparable to those in Lebanon, The Times of Israel reported.

Carried out by the 401st Brigade of the Armored Corps, the exercise was the largest in years. 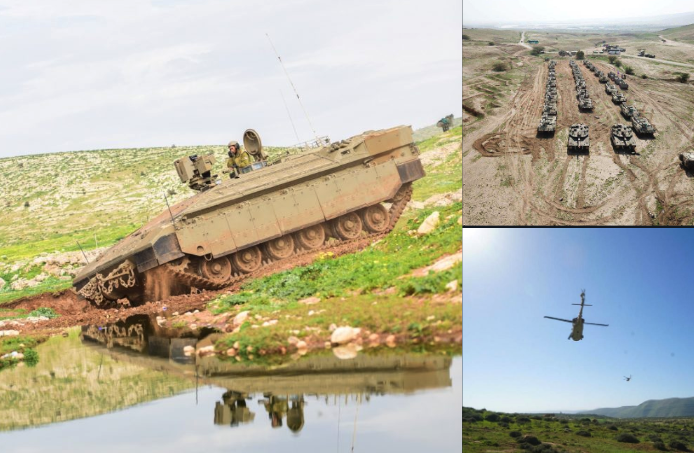 IDF forces completed the field training exercise alongside the Israeli Air Force, in addition to the engineering and intelligence corps.

According to the IDF and also seen on specific Twitter feeds, dozens of armored personnel carriers, main battle tanks, attack aircraft, and helicopters were deployed in the training zone in the Jordan Valley

Photos: IDF drill in northern side of Jordan Valley pic.twitter.com/p62igdnMB0

One Twitter user said, “IDF temporarily evicted 291 people from 4 communities in the northern Jordan Valley, to conduct military drills on their lands.”

PALESTINE: routines of the occupation— On Feb 06, 2019, IDF temporarily evicted 291 people from 4 communities in the northern Jordan valley, in order to conduct military drills on their lands. https://t.co/A8AFAaaS1L

“As the situation in Syria stabilizes, Hezbollah is returning its forces to Lebanon,” Col. Dudu Sonago told Channel 12. “They are no longer a guerrilla organization, but a real army. They fought there in regiments of companies and battalions, very similar to the military.”

“They operate in civilian areas and are ready with a large quantity of anti-tank missiles,” added Sonago. “This is a challenge the IDF must train for.”

The Times of Israel says tensions between Israel and Lebanon “have heightened in recent months ” following IDF operations to “locate and destroy Hezbollah cross-border attack tunnels reaching into the country.”

Hezbollah leader Hassan Nasrallah dismissed the effectiveness of the Israeli operation, which ended in January.

Nasrallah criticized Israel earlier this month over Prime Minister Benjamin Netanyahu’s warmongering attitude against Lebanon over the “inclusion of the Iran-backed organization in the country’s new government,” said The Times of Israel.

On Tuesday, Lebanese Prime Minister Saad Hariri said the new government would allow Hezbollah to keep its weapons, which some of the military hardware was used against Israel in 2006 and are used regularly to threaten Jerusalem.

Former Defense Ministry Ombudsman Maj.-Gen. Yitzhak Brick has recently claimed that IDF forces are not ready to wage war on Hezbollah, arguing in a damning report that the military is “worse than it was at the time of the Yom Kippur War” in 1973.

With war drums beating between Israel and Hezbollah (and even maybe Iran), the IDF has completed its latest large scale war drill, simulating a fierce battle between its adversaries.

With the global economy going down the tubes, Zero Hedge readers must be on the watch for geopolitical flashpoints in the coming quarters.