My own Australia has of course joined the chorus of US lackeys who are refusing to recognize Venezuela’s only legitimate and elected government, recognizing instead the presidency of some guy named Juan who decided to name himself Venezuela’s president with the blessing of the United States government. 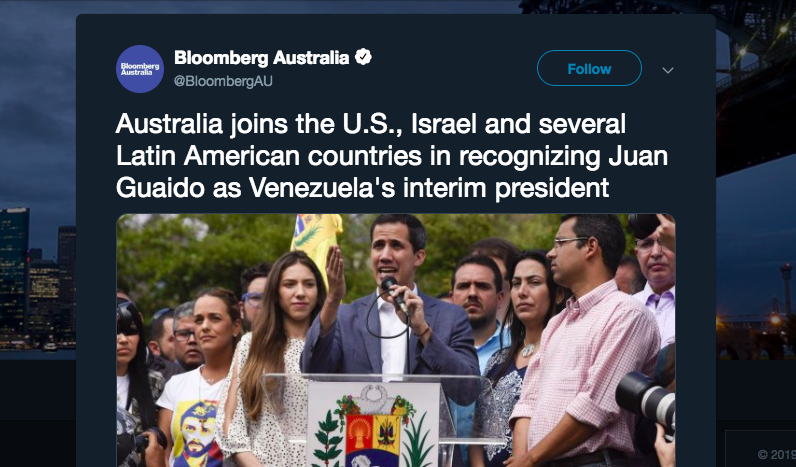 A statement from our Minister of Foreign Affairs, Marise Payne, reads as follows:

Australia recognises and supports the President of the National Assembly, Juan Guaidó, in assuming the position of interim president, in accordance with the Venezuelan constitution and until elections are held. Australia calls for a transition to democracy in Venezuela as soon as possible.

Australia supported the Lima Group’s early call for Nicolas Maduro to refrain from assuming the presidency on 10 January, relayed through our non-resident Ambassador to Venezuela.

We now urge all parties to work constructively towards a peaceful resolution of the situation, including a return to democracy, respect for the rule of law and upholding of human rights of the Venezuelan people.

It was only a matter of time before such a statement was issued. Australia has long served as Washington’s basement gimp, marching to the beat of US foreign policy on all issues no matter how idiotic or dangerous for as far back as I can remember. My country has seamlessly transitioned from British colony to US military/intelligence asset without ever once raising its head toward anything resembling national sovereignty except once briefly in the mid-seventies, which saw a CIA/MI6 coup oust our elected leadership here. This coup was preceded by our then-Prime Minister’s discovery that Australian intelligence officers had been operating as proxies of the CIA to overthrow the Allende government in Chile in yet another sovereignty-violating coup, one which has often been compared to what we’re seeing in Venezuela today.

Well of course Australia has just recognised the illegal US coup in #Venezuela. We have been a US #ClientState since the CIA helped UK overthrow our PM in 1975. #auspol #FreeASSANGE https://t.co/q8oDblXJxu

The US government and its assorted client states have no business whatsoever issuing orders and ultimatums decreeing that a government of a sovereign nation must restructure itself, but here we are. Sovereignty is such an alien concept in a collective reality tunnel that has been shaped by propaganda to view imperialism, American exceptionalism and nonstop interventionism as perfectly normal that we now have the American establishment simultaneously (A) shrieking about Russian clickbait on Facebook as an unforgivable act of war, and (B) using crushing sanctions, CIA covert ops, and an active campaign to delegitimize a nation’s leadership in order to topple an entire government. This wild discrepancy is justified with the unquestioned assumption that the US has something called “moral authority” in the world, while Russia and Venezuela lack moral authority, despite the US being responsible for innumerable acts of butchery and destruction which are grossly immoral by any metric.

In a recent talk with Fox’s Ann Coulter, sniveling war pundit Bill Maher cited the Monroe Doctrine to argue that the US has every right to tell Venezuela what it’s allowed to do with its own country and its own allies because South America is “our backyard.”

“Today, Venezuela — this is the front page of the New York Times — Venezuela, okay, they have a guy, an opposition leader who finally stood up, and we are backing him,” Maher said.

This freaky slave owner talk is so normalized for reasons which are inseparable from the reasons why our world is as messed up as it is.

Imagine a world wherein sovereignty was truly understood and honored. What would change?

Well, obviously we’d no longer see the most powerful nations interceding in the affairs of others, bursting in and treating a weaker country like property because it has resources it wants or a style of government it doesn’t. The idea that there are people in the world whose lives you don’t get to control would be seen not as some outlandish, fringe notion to be dismissed as wacky crackpottery, but as a self-evident truth which forms the guiding principles of the way different parts of the world interact with each other.

But it goes so much further than that, if you think about it. With a solid understanding of sovereignty, perhaps the single most important thing that would change is that people would no longer think it’s okay to manipulate the thoughts of other people for their own interests. A political/media class would no longer have the permission nor the desire to keep slipping their rapey fingers into our minds and working to control the ways we think, vote and behave, which would enable us to construct a society based on truth and compassion rather than on power-facilitating belief structures placed in our heads by the plutocratic media and plutocracy-serving politicians.

In such a society we wouldn’t have murder, which is the gravest violation of personal sovereignty, nor would we have rape or assault for the same reason. It’s entirely possible that government as we know it would cease to exist and people could design an entirely new way of functioning, though government could also exist in some form that was fully accountable to the people if it turned out that that’s what we wanted. Nobody would see anyone else as property, or as a resource to be exploited, or as a pawn to be manipulated, or as part of a world that must be fully dominated and controlled, if we could just as a species evolve a mature relationship with the concept of sovereignty.

This AP article shows that this coup attempt in Venezuela has been being planned since Trump entered office.

Many of the protests were partially planned outside of Venezuela by the US, other South American rightwing leaders, Trump, and the Lima Group.https://t.co/yzMCagsO1C

The current US-led coup against Venezuela is a violation not just of the sovereignty of Venezuela, but of the sovereignty of all the nations which have been bullied into pushed along with it by a much more powerful nation and by the power-serving goons in their own governments. The United States government is the very last organization which should be “helping” a nation topple its government; US interventionism is so consistently disastrous that wanting them to “help” in Venezuela is dumber than wanting Edward Scissorhands to help change diapers at the local daycare center. Everyone knows this on some level, but the servile relationship the world has with the US empire has normalized complicity in absolutely insane agendas all around the world.

One of the most beneficial things anyone can do to help move humanity in a sane direction is to develop a deep, visceral understanding of and respect for the concept of sovereignty. Let this deep understanding inform your life, then let that understanding bleed out into the world. I’ll hold up my end, you hold up yours, and with a small stack of miracles we can help carry this whole thing home.