Just as it warned it would several days ago, as part of its latest quarterly economic outlook report the IMF just slashed its forecast for 2019 global GDP to just 3.5% from 3.7% as of October, its lowest forecast in three years, while warning that trade tensions pose further downside risks to global growth. 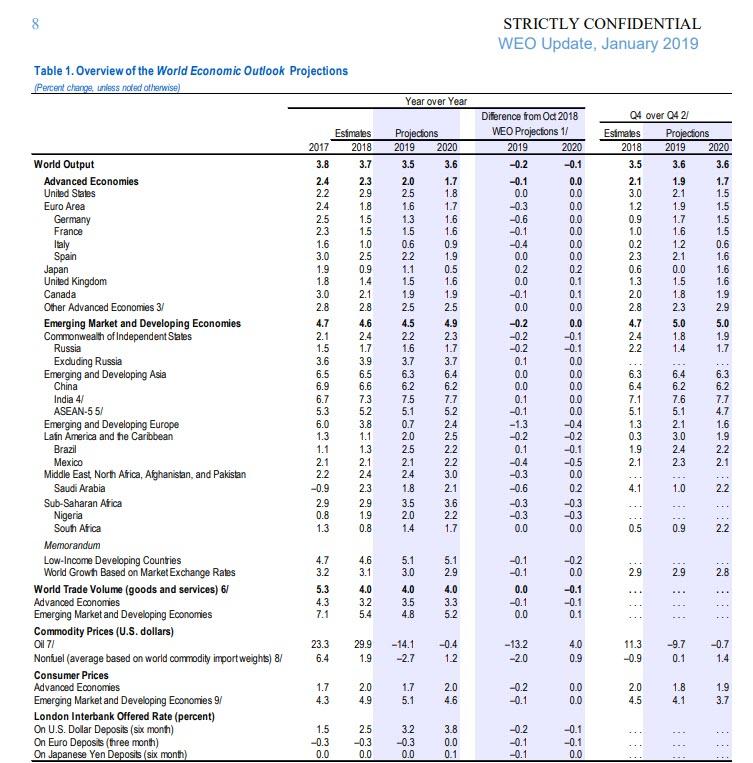 In its second growth downgrade in three months, the IMF blamed softening demand across Europe and recent stock market volatility, and while its US GDP forecast remained somewhat surprisingly unchange, still seeing a solid 2.5% in 2019 GDP growth, the IMF took a machete to its German GDP forecast, which the IMF now sees growth only 1.3% this year, down 30%, or 0.6% from its forecast last October. The Monetary Fund blamed soft consumer demand and weak factory production after the introduction of stricter emission standards for cars was behind the shift. To be sure, recent German economic data has been disastrous, and confirmed the sharp slowdown in the economy, and it will be up to Q1 data to confirm or deny whether a German recession has arrived. 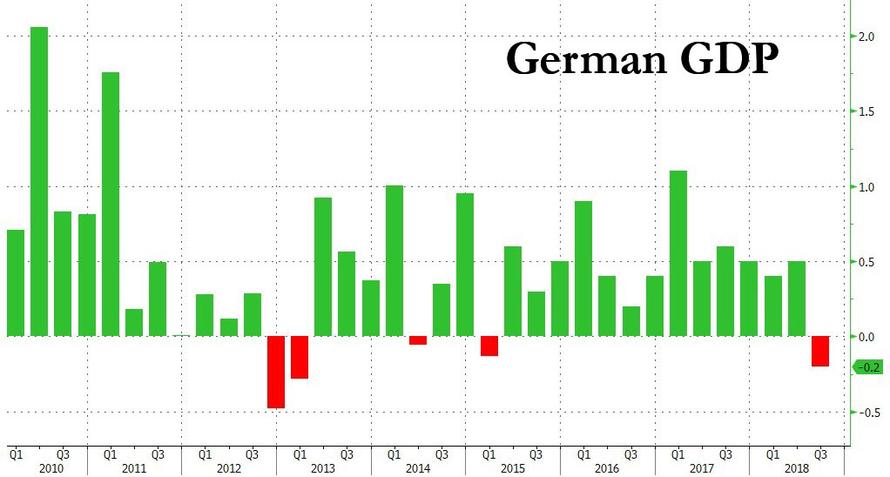 Despite seeing sharp slowdowns to other key European economies, including Italy, where it cited weak demand and higher sovereign borrowing costs, and France, where the so-called Yellow-Vest protests have hurt the economy… 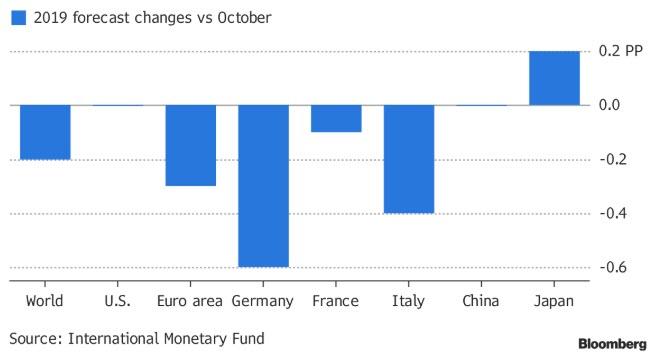 … the overall outlook was somewhat more upbeat than some had feared especially as many investors openly fear a U.S-led slowdown taking hold, the fund left its projections for the U.S. and China unchanged and even anticipates a pickup in worldwide expansion to 3.6 percent next year.

Nonetheless, risks “tilt to the downside” said the IMF just hours after China revealed the slowest expansion since 2009 last quarter. It will set the tone for this week’s World Economic Forum meeting in Davos, Switzerland.

“The global growth forecast for 2019 and 2020 had already been revised downward in the last WEO, partly because of the negative effects of tariff increases enacted in the United States and China earlier that year” the report said.

“The further downward revision since October in part reflects carry over from softer momentum in the second half of 2018—including in Germany following the introduction of new automobile fuel emission standards and in Italy where concerns about sovereign and financial risks have weighed on domestic demand—but also weakening financial market sentiment as well as a contraction in Turkey now projected to be deeper than anticipated.”

“It is important to take stock of the many rising risks,” said Gita Gopinath, the fund’s new chief economist.

The IMF also said that “a range of triggers beyond escalating trade tensions could spark a further deterioration in risk sentiment with adverse growth implications, especially given the high levels of public and private debt. These potential triggers include a “no-deal” withdrawal of the United Kingdom from the European Union and a greater-than-envisaged slowdown in China.”

Among the threats cited in the report were more trade tariffs, a renewed tightening of financial conditions, a “no deal” Brexit and a deeper-than-anticipated slowdown in China. And while some of the key issues the IMF flagged in Europe may be temporary, the IMF said that they came amid a backdrop of global trade policy uncertainty and concerns about China’s outlook.

“The possibility of tensions resurfacing in the Spring casts a shadow over global economic prospects,” the IMF said, which also predicted that global trade will grow by 4.0% in 2019 and remain unchanged in 2020, a 0.1% cut from its prior forecast. As recently as 2017, the IMF predicted global trade would grow 5.3%.

In addition to slashing Europe’s GDP prospects, the IMF also cut Mexico’s GDP by up to half a percentage point, while admitting that the slump in Venezuela may be deeper than previously anticipated.

While the IMF’s U.S. forecast was unchanged at 2.5% in 2019, it said growth in the world’s biggest economy will cool to 1.8% in 2020 as stimulus from tax cuts fades and the economy responds to higher Federal Reserve interest rates.

Finally, as for China, the IMF still expects GDP to grow 6.2% in 2019 after 6.6% in 2018 – the lowest since 1990 – and to continue slowing due to the trade war and the government’s failing attempts to reduce systemic leverage.