Who in their right mind would buy an investment company at 90x NAV? A better question for China Ding Yi Feng Holdings shareholders would be who other than unwitting index-fund managers and the retail investors who buy their products? 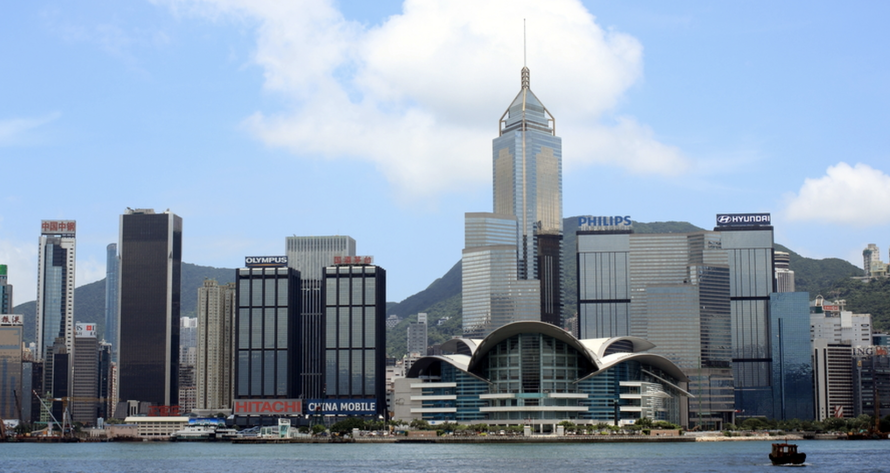 In a stunning report published Friday, Bloomberg highlighted what we imagine is one of the most egregiously overvalued stocks in the world (a world where Tesla is also a publicly traded company). Despite being comprised of mostly money-losing investments, China Ding Yi Feng has seen its shares smash through one all-time high after the next over the past five years. In that time, it has rallied 8,563%. 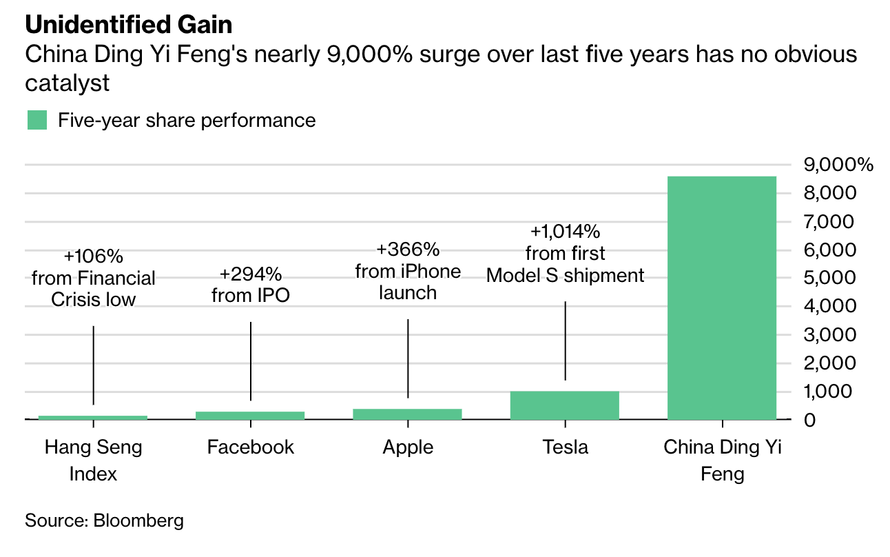 But as BBG points out, there is no obvious catalyst for this rally. By every sensible investing metric, the company’s shares should be in free fall.

But ask local market veterans about China Ding Yi Feng Holdings Ltd., and they’ll tell you the rally makes little sense. The investment-holding company has lost money for seven of the past eight years; its stock trades at one of highest valuations worldwide; and DYF’s chairman, a Taoist scholar who boasts investing skills on par with those of Warren Buffett and George Soros, has recently been the subject of several critical reports in Chinese media.

“Fundamentals do not support the stock’s rally at all,” said Li Yuanrong, managing director of Shenzhen-based venture capital firm 20VC.

So, what’s keeping its shares afloat? Why, passing investment strategies, of course! After the company became big and liquid enough to be included in the MSCI, multibillion-dollar funds run by BlackRock Inc., Vanguard Group Inc. and Northern Trust Corp. have all been buyers.

Of course, these funds aren’t explicitly choosing to buy Ding Yi Feng. Rather, by dint of needing to mimic the index, they’re effectively forced to buy. MSCI uses quantitative criteria such as market value, free float, and liquidity when choosing companies for its indexes and doesn’t make judgments about profitability, growth prospects or “any other subjective” metrics. This created what appears to be a feedback loop as its rising market value has given it a heavier weighting, and its heavier weighting has helped drive the company’s market value higher.

While the company has made money losing investments, its main source of revenue appears to be a pyramid scheme that has recently attracted press scrutiny.

In an emailed response to questions from Bloomberg, the Asset Management Association of China said it was aware of media reports that a unit of Ding Yi Feng Group (a Chinese company that also counts Sui as chairman) had offered individual savers guaranteed monthly returns of 2.5 percent on an investment and that the unit had failed to register multiple fund products with the association.

AMAC said private fund managers in China can’t guarantee principal and minimum returns and that it will report and deliver any unlawful cases to the China Securities Regulatory Commission and other authorities. The CSRC didn’t reply to a faxed request for comment.

That the company was included in the index at all speaks to how MSCI hasn’t paid enough attention to discerning which companies that meet its other criteria “don’t pass the smell test.”

The stock has gained 202 percent in the past year alone, the best performance among 2,700-plus members of the MSCI All-Country World Index. Valued at 95 times net assets, it’s one of the most expensive listed companies on Earth. (The stock is also ineligible for short selling, which may help explain why it hasn’t faced more downward pressure. It slipped 1.6 percent on Friday.)

“Why would anyone buy an investment company at 90 times NAV?” said David Webb, an independent investor and former Hong Kong Exchanges & Clearing Ltd. board member who has made a fortune buying small-cap Hong Kong stocks over the past two decades. He said MSCI should leave DYF and other Chapter 21 companies out of its benchmark indexes.

“One of the risks MSCI faces in Asia’s equity markets, where rules can be relaxed and enforcement patchy, is you see a lot of firms included in indexes that wouldn’t pass the smell test,” said Melissa Brown, partner at Hong Kong-based advisory firm Daobridge Capital and former member of the Hong Kong stock exchange’s listing committee, speaking generally.

Oh, and DYF shareholders have benefited from another quirk in Hong Kong markets: short-selling in the company’s shares is illegal. Ultimately, stories like this help tarnish Hong Kong’s reputation as an international financial hub, and a developed market on par with the US and Tokyo. Also, discerning traders can’t help but wonder whether DYF will be the next spectacular market blowup in Hong Kong?