“You’re such an idiot,” one of my new hedge fund manager reader friends wrote me the other day. “You spent the last couple of years warning about the possibility all of this Central Bank monetary madness causing a huge rip higher in risk assets. And here we are, it is finally here, and instead of taking a victory lap, you are monkeying around trying to fade the rally by buying Nasdaq put spreads. You’re incorrigible” 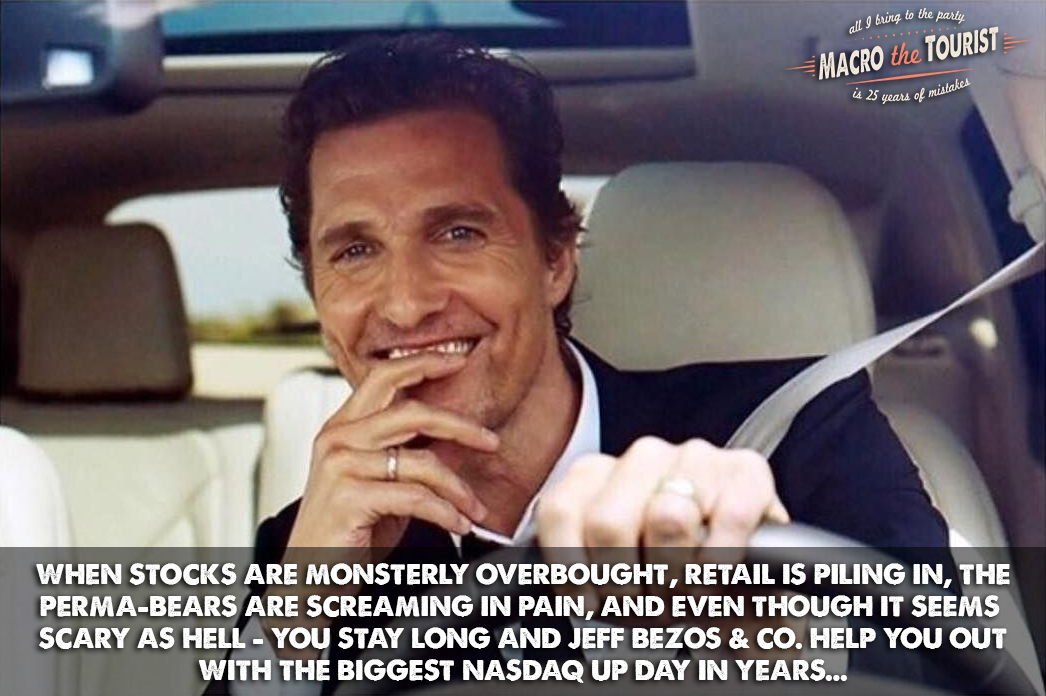 Yeah, my pal is right. If I am being honest, this is my biggest weakness. Too often I am contrarian to the point of my own detriment. I have never been good at riding an overly popular trade to its fullest.

It was easy for me to trade stocks from the long side when everyone was scared about the next crash. Yet now that most everyone has abandoned their fear, I find it almost impossible to stay long as they push it higher and higher.

And to be truthful, for a fleeting moment last week, I felt like I might do the impossible, and catch the top in the stock market. After grinding higher for the past week during the Chinese Communist Party Congress meeting, as Beijing was wrapping up, stocks finally looked like they were ready to sell off. 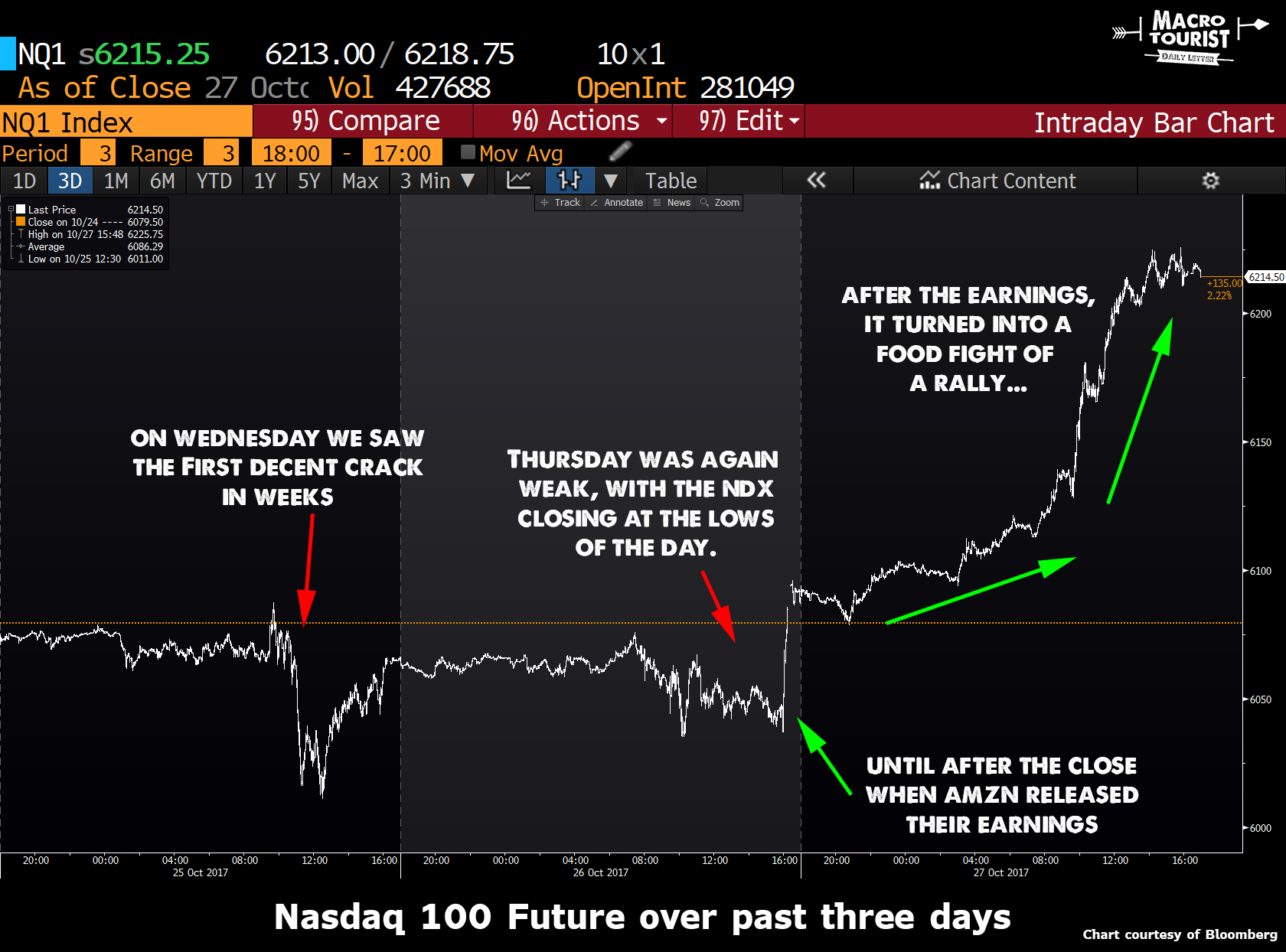 Yet after two poor trading days mid-week, Thursday after the bell; Amazon, Google and Microsoft released their earnings and sparked one of the biggest Nasdaq rallies of the past decade.

But the really interesting part? The rally was extremely narrow. Here is a chart of the Nasdaq 100 daily performance compared to the Nasdaq 100 equal-weighted index. 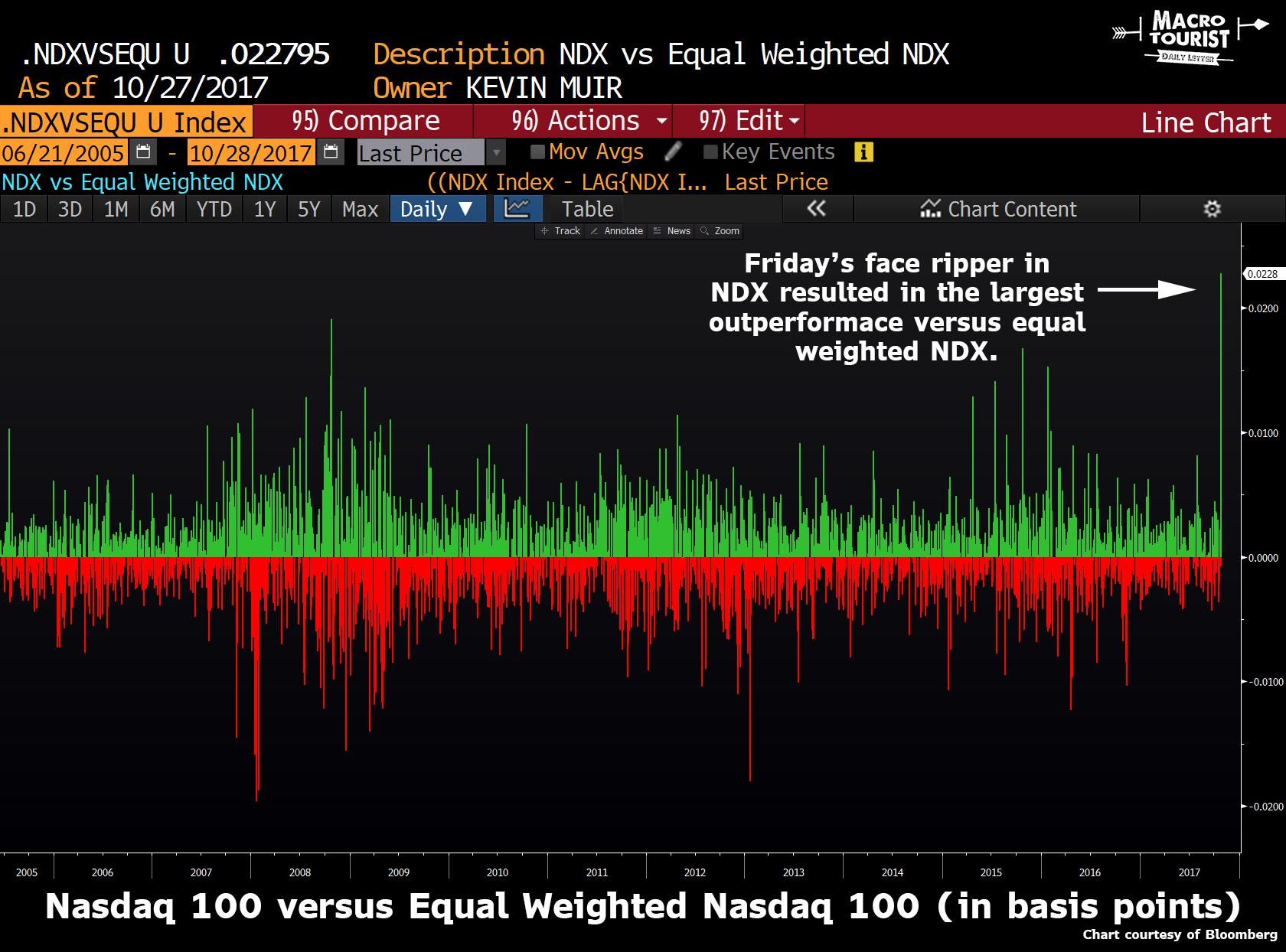 I didn’t come up with the idea for this chart. Instead I stumbled upon the stat in a market commentary, but couldn’t find the actual chart. So I thought it needed to be created as, in the history of the Nasdaq 100 equal-weighted index, the NDX has never outperformed by as much as Friday’s 2.8% face ripper.

Now don’t worry. I will not become some bitter short seller that just sits in a bathrobe screaming at kids to get off his lawn. Yet I must admit to being thankful that I expressed my short side trading stab using cheap options instead of outright futures.

And before I go any further, I should have known better. The Market Gods were bound to reign down their vengeance as, the previous week, Reformed Broker’s Josh Brown’s article “Just own the damn the Robots” took an awful amount of flack (some of that from yours truly – “The Winners of the New World Redux”).

It was the famous speculator Bernard Baruch who said, “the main purpose of the stock market is to make fools of as many men as possible.” Although this quote should probably be updated to include women, it is just as relevant today as it was decades ago.

It should be no surprise that given the huge pushback to Josh’s article, the Market Gods’ next move would be to make fools out of all of Josh’s critics and send the FANG stocks screaming higher.

Now don’t mistake my comments as a belief this investing theme should be embraced. The boat still is extremely crowded, and there is no way I could bring myself to chase the robots, the Nasdaq, or any stock market up here into this euphoria. I am a trader that believes this mad scramble into equities is long-in-the-tooth. But I can’t resist pointing out how, the greater the pushback, the greater the chance the writer is on to something.

Back to the narrowness of this rally. I stumbled upon this great post by a more quantitative driven twitterer, SJD10304, Steve Deppe, the author of the Charts & Sheets blog.

It seems to me that Steve is acutely aware that this thread is data mining at its worse, and that he posted it as somewhat facetiously, but it’s interesting nonetheless.

The $SPXA50 that Steve is referring to is the percentage of stocks within the S&P500 that are above the 50-day SMA (simple moving average). Since 2002 there have been 237 weekly declines of more than 10% for this indicator, but only 5 occurrences also coincided with the actual S&P 500 closing higher.

What do you think the results of those 5 occurrences look like?

Look at the column “SPX FWD 1 Week Return.” That’s the S&P 500 return after these conditions were met. Although in 2002 there were a couple of positive results, the last three have been big losers, with the 2008 instance being especially painful.

Don’t go out and sell spooz with both fists because of this stat. I am not showing it to justify a short position. I am posting it to show the unusual aspect of the current environment.

Amazon will destroy us all

A few months back, when Amazon announced they were buying Whole Foods, the rest of the grocers were crushed. 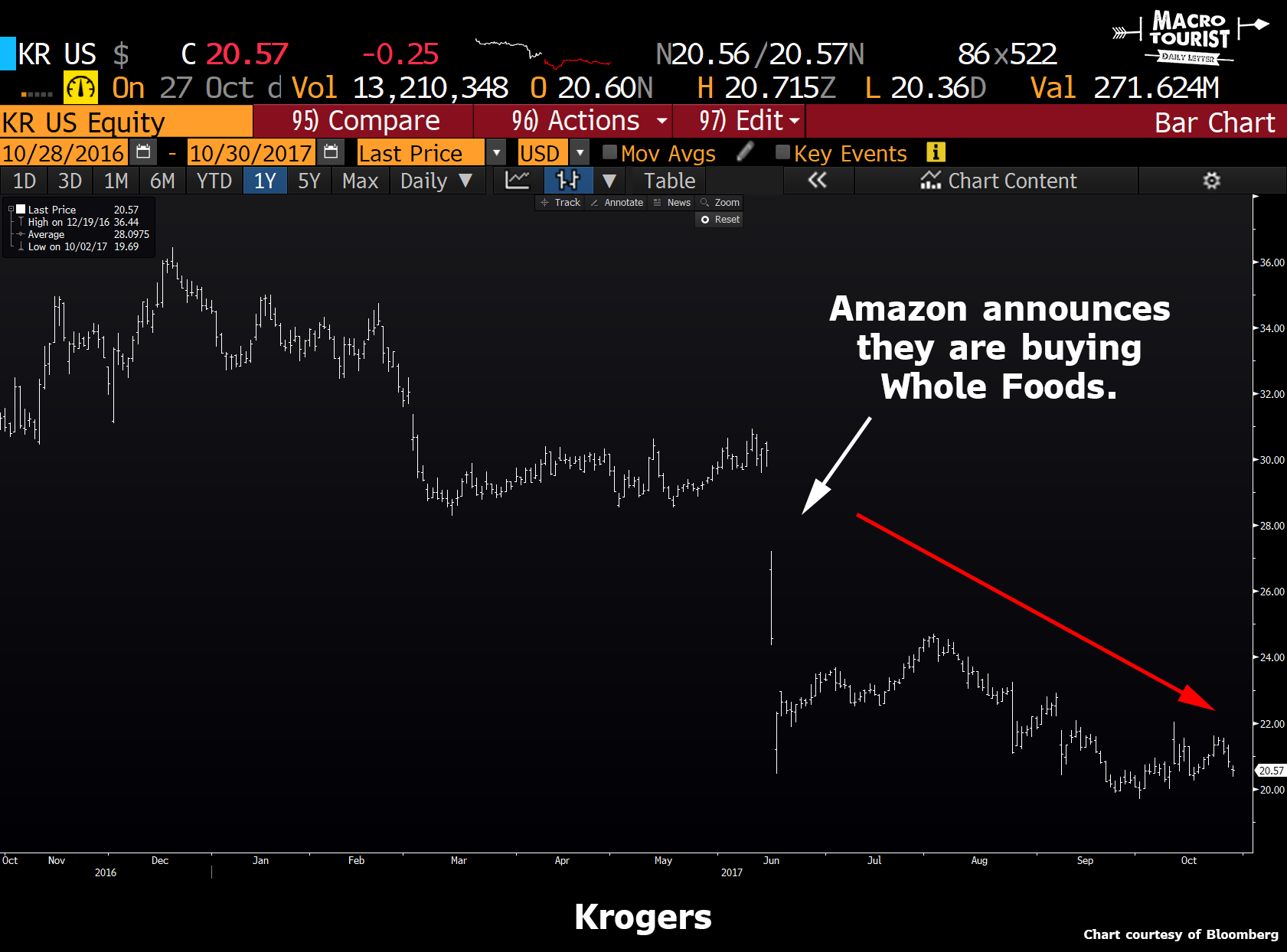 At the time, one of my longtime readers, Jonathan Carey (and a terrific source for what is happening on the ground in San Francisco), emailed me to say;

“I have figured out how this bull market ends: Amazon announces it is going to enter each industry – and then every stock sells off.”

Jonathan’s comment made me laugh, and I saved it for a time like now when Amazon’s dominance seemed particularly unstoppable. And I guess this plays into Josh Brown’s just-own-the-damn-robots piece. The winners of the new era economy are crushing everyone else. Whether it is Amazon, Google or Facebook, these new titans are destroying existing businesses, and it is increasingly becoming a winner-take-all economy.

So it really shouldn’t be any surprise that the breadth of the stock market rally is becoming more and more narrow. After all, the winners are becoming a smaller and smaller group.

This summer I noticed that ProShares filed a prospectus for an ETF that went long online retailers (ie:AMZN) while shorting traditional bricks and mortar stores. 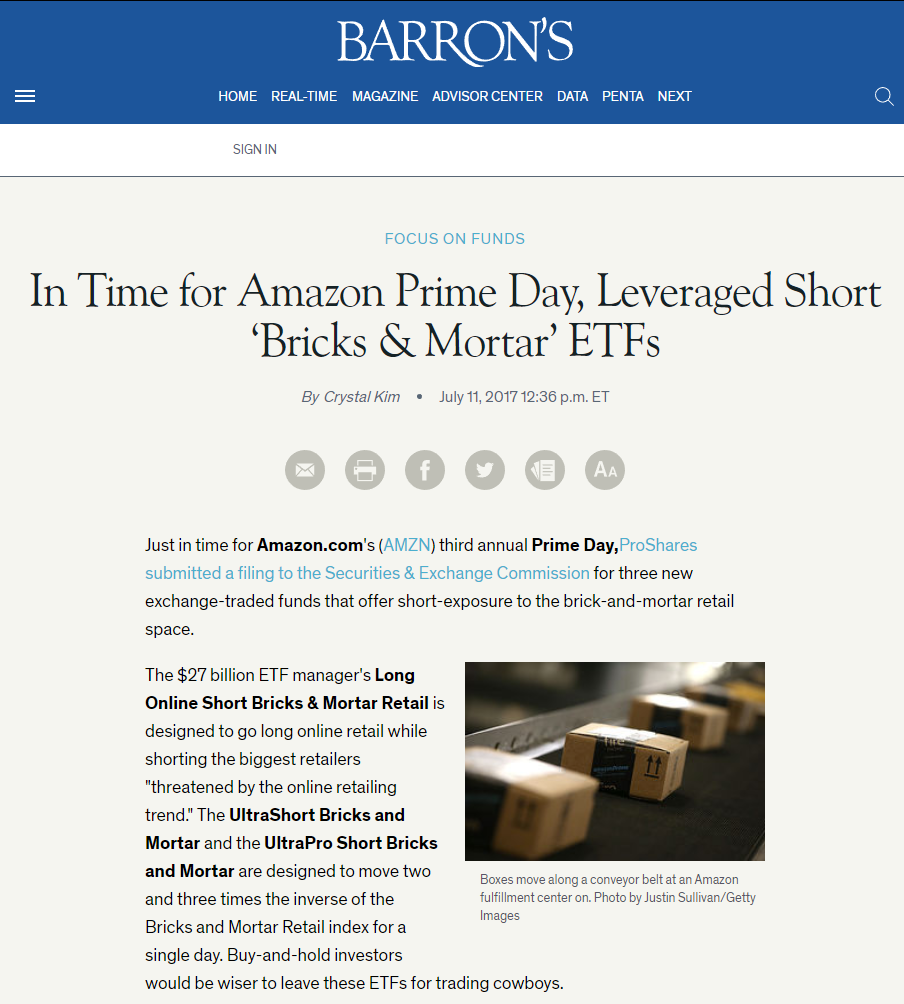 I wondered if the Amazon / Whole Foods announcement, combined with the filing of this ETF, might coincide in the top of this trend. Obviously, we need more than just a filing to mark the top. I can’t wait for this ETF product to trade, as I suspect by the time there is enough demand to float an ETF, it will be all-baked-in.

Up until now, this post has been filled mostly with recounts about what has happened, with little insight into what might happen. And although I am not changing my tune that the US stock market is overbought and ripe for a surprise correction, I am adding a trade to my arsenal.

There is no doubt that Friday’s action was wild. And even though it ripped against me, I will take that sort of action any day when compared to the previous month, which consisted mostly of days dripping higher.

Something changed in the character of trading last week. Starting towards the end of the Chinese Congress Party meeting on Tuesday, financial asset volatility stopped declining, and picked up.

And although I am bearish on the near term stock market action, I concede there is a chance that this giant-f’d’-up-monetary experiment that Central Banks have embarked on, gets away on them. They have stuck an ungodly amount of monetary stimulus into the financial system over the past decade. A declining velocity of money has muted the effects, but there will reach a point when it finally lights, and the effects will be unprecedented.

A good trader never says never, so I am keeping an open mind to the possibility this overbought rally just gets more and more overbought. After all, the rules have gone out the window when they pumped trillions of dollars into the financial system. When some pundit tells you they know for certain how this will affect markets, ignore them – they are full of shit. The truth is that no one knows how this madness will end because it has never been done before.

But that doesn’t mean there aren’t ways to take advantage of this situation.

Now I am about to recommend a long volatility trade, and before you label me some perma-bear that thinks the monster VIX short position will end in a 2008 debacle – read this – The VIX Article No One Will Like.

I am not buying volatility because of positioning. Although I do acknowledge the large speculative VIX future short position, that is not the driving reason behind my trade. 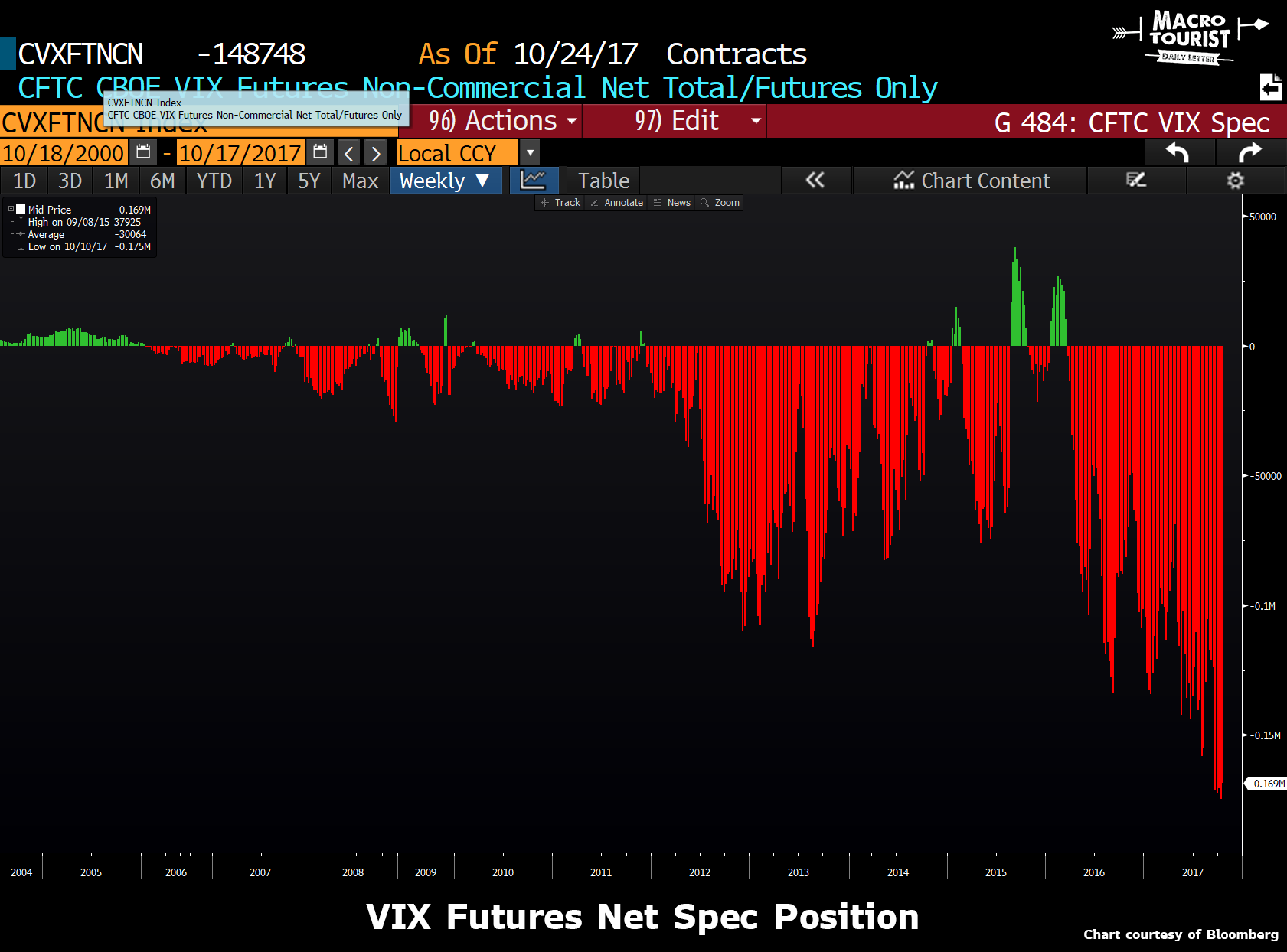 Too many investors are stuck with this weird belief that HIGHER STOCKS = LOWER VOLATILITY. This is simply not true. Granted there is a tendency for the stock market to take the stairs up, and the elevator down. This is why stock returns and volatility are often inversely correlated. But it is not written in stone. 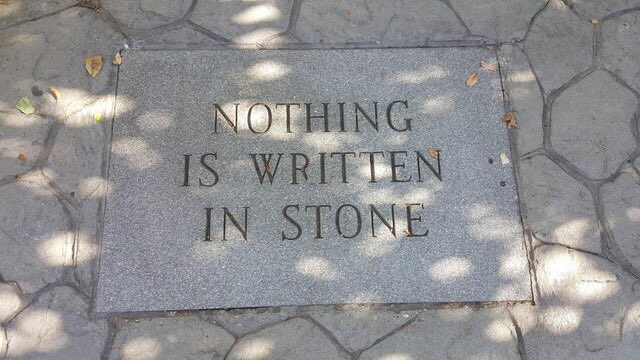 In a melt-up scenario, it is very possible that stocks become more volatile, not less. Volatility represents the variability of prices. In a run-away market, prices will zip around like Friday more and more, not less. 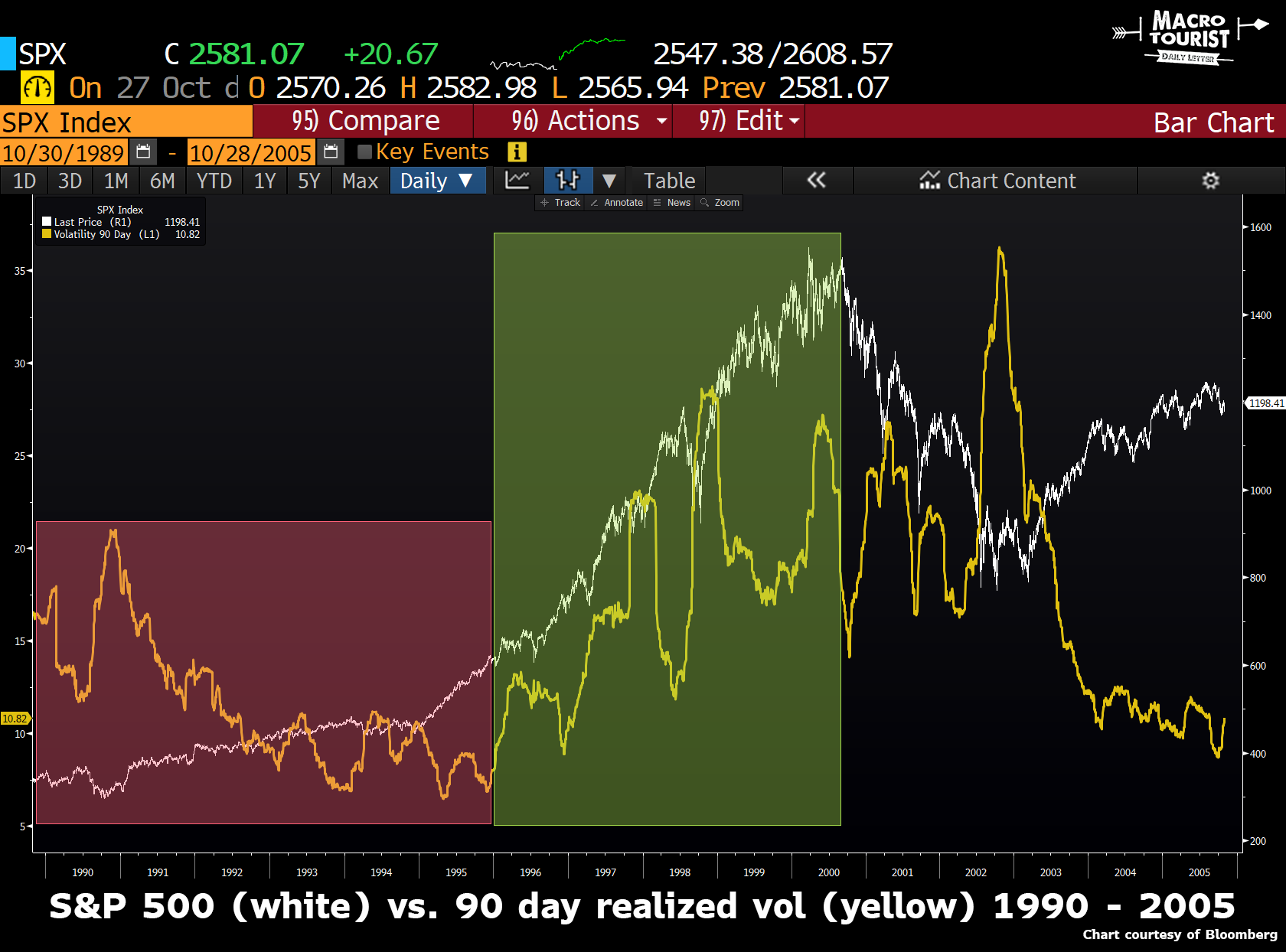 From 1990-1995 realized volatility declined, but then when stocks took off in 1996 in the crazy DotCom bubble mania, vol went along for the ride.

So yeah, I know there are a bunch of perma-bears recommending long volatility for an end-of-the-world trade, but ignore them. You don’t need to be a doomsdayer to be a vol bull.

Don’t get me wrong, I still think many risks are being overlooked by over-enthusiastic stock bulls. The winding down of Central Bank monetary stimulus, the recent Chinese policy change regarding financial asset prices, the constantly flattening yield curve, the monster short VIX futures position – all of these indicators are screaming danger. But everyone knows those reasons, and I am not adding any value harping on all the risks the market has been ignoring for the past few months. Yet that’s not why I think volatility is a great buy. Volatility is a great buy because the market is stretched, and these sorts of moves don’t end by markets quietly rolling over. And neither can they simply grind higher forever. Risks of an epic melt-up make vol just as appealing as risks of a crash.

This trade is difficult to structure. The steep curve in VIX futures market makes holding a long volatility trade pricey.

And before you email me telling me that implieds are still expensive versus realized, don’t bother. I know.

But the key word there is “realized.” There is no doubt that past volatility has been moronically low. I am predicting an increase in realized volatility going forward. I get it – so is the rest of the market. Yet I think it could happen in an upward move just as easily as downward decline.

I don’t want to get into a complicated option discussion. There are a million of different ways to play this. The important part is that the end of the short volatility trade is probably over. If we get my anticipated correction, vol probably goes bid. If the stock market continues to accelerate higher, vol also probably goes bid. Either way, I think volatility is set to rise. I actually feel more confident about that call than my prediction that the next-move-is-down for the stock market.

The post Is It Finally Time To Buy Stock Market Vol? appeared first on crude-oil.news.