President Trump’s stare-down with Democrat leaders Pelosi and Schumer over $5.7 billion in funding for a proposed southern border wall construction is poised to become the longest on record by January 12th.  Trump has shown no signs of backing down, demanding national airtime for an address to the nation regarding the wall:

This isn’t about the Wall, everybody knows that a Wall will work perfectly (In Israel the Wall works 99.9%). This is only about the Dems not letting Donald Trump & the Republicans have a win. They may have the 10 Senate votes, but we have the issue, Border Security. 2020!

…..on a Border is only effective in conjunction with a Wall. Properly designed and built Walls work, and the Democrats are lying when they say they don’t. In Israel the Wall is 99.9% successful. Will not be any different on our Southern Border! Hundreds of $Billions saved!

…and Israeli President Benjamin Netenyahu agreed with Trump, using the border wall between Israel and the West Bank as his model for success:

The wall Netenyahu is referring to is the Israel-Egypt barrier on the southern border, which began construction in November 2010 and was completed in December 2013.  The 152-mile long barrier was built at the urging of Netenyahu to curb an influx of illegal immigrants and terrorists from African nations.

Even left-leaning Politifact was forced to admit it worked…

Johnson said Israel cut its illegal immigration rate by “99 percent” by constructing a 143-mile fence along its southern border.

…however, it is hardly the only border wall built in Israel.  It is estimated that between 293 and 308 miles of the Israel-West Bank barrier wall are fully constructed, with a total estimated length of between 440-490 miles when completed.  The successes of the “security fence” have been lauded by its proponents…

In March 2002 alone, 140 Israelis were murdered in a continually escalating wave of Palestinian terrorism. Noting that only one suicide bomber managed to come from Gaza, where a security fence was already in place, Israel began construction of a security fence facing Palestinian areas of the West Bank in 2003.

The construction of Israel’s security fence put an immediate and dramatic end to the Palestinian campaign of suicide bombing. By 2009, only 15 Israelis were killed by Palestinian terrorism, compared with 452 murdered in 2002, the year before construction began.

…but as noted above, Israel has even more border barriers.  The security fence with Gaza has an estimated length of 25 miles, and seven miles of an 80-mile security barrier of “concrete wall topped by steel mesh, sensors and surveillance cameras” on the northern border with Lebanon have been completed.

Clearly, the very tiny country of Israel devotes an incredible amount of resources to border fencing and security, with an estimated 484 miles of completed walls/fencing and more under construction.  Conversely, the US claims to have 580 miles of “barriers” in place already.  Israel’s heavy usage of border walls is even more astounding when its size and GDP are considered relative to the US:

Israel’s population is 2.7% of the US population, and its annual GDP is 1.8% that of US GDP.  In spite of Israel’s tiny size, population and GDP, the total mileage of completed barriers in the country is just under 25% that of the entire length of the 1,954-mile US-Mexico border. 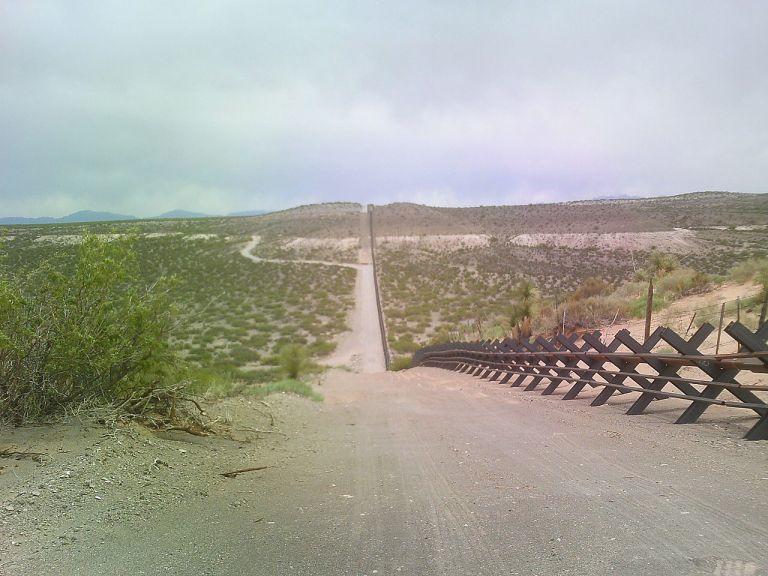 Finally, there was the Border Patrol itself. As scores of interviews reveal, this agency did not want a fence so difficult to climb that there would be injuries, taking up the valuable time of its agents and resulting in a mountain of liability claims.

Yet, despite all the trappings, Border Patrol agents report that individuals routinely manage to scramble over both the primary and secondary fences in less than one minute. Officials now acknowledge that the fence was never designed to stop illegal immigrants cold, just slow them down so they could be apprehended. “The fences were never meant to be more than a filter,” one Border Patrol officer explained.

To put US wall construction into per capita terms vs. Israel’s wall, if just 50% of America put just 20% of the resources into border walls that Israel does, the full length of Trump’s wall would already be completed.  Minus, of course, the sections of the wall that don’t need to be rebuilt – many border areas already have a sufficient barrier in place.

The opposition to Trump’s border wall ultimately boils down to the argument “it’s a waste of money”.  But the same politicians so vociferously opposing a $5.7 billion dollar wall funding request complained, but ultimately funded George W. Bush‘s Iraq war request – despite its $54.4 billion budget for 2003 alone (over nine times Trump’s wall request).  That price tag has since ballooned well into the trillions – but Democrats refused to shut the government to prevent it.

Democrats have also refused to shut the government over funding for the US Navy’s wasteful aircraft carrier spending.  The last completed aircraft carrier, the USS George W. Bush (CVN-77), was commissioned in 2009 at a cost of $6.2 billion (more than Trump’s wall funding request), and underwent its first deployment in June 2011.

The USS Gerald R. Ford (CVN-78) was commissioned in 2017 at a cost of $17.5 billion (including $4.7 billion in R&D for the new carrier class) – and will still require more funding to fix lingering issues with ship engines and EMALS catapults that stilldon’t work properly – before it can undergo its first deployment…

Shock testing. That’s 500 yards separation. The first ship in every new class goes through this….. except the new CVN-78 because “fear that it would cause additional delays to the operational deployment.” pic.twitter.com/zYD1MbiIvT

…but that still hasn’t caused Pelosi or Schumer to shut the government down to object to this waste of taxpayer dollars.

In fact, the USS John F. Kennedy (CVN-79) continues to be built, with no contractors or military personnel fired or disciplined, despite not being scheduled to enter service until 2022.  And as noted above by Anthony Capaccio, the future USS Enterprise (CVN-80) just began construction with an estimated cost of $12.6 billion, and the unnamed CVN-81 at an estimated price tag of $15 billion was recently approved by the Navy – without any objection from Democrats:

Navy gets yr-end gift from DoD which has approved its controversial two-carrier Ford Class contract for Huntington Ingalls..even as the first ship, CVN-78, still doesn’t have weapons elevators to move weapons on deck

Regarding applying Israeli solutions to the US – I’ve stated in the past that there’s no “one size fits all” solution, but that it it is wise to cherry pick ideas that have worked, and apply some of their concepts.  Israeli airport security describes TSA procedures, specifically the new body scanners, as “worthless” – as evidenced in how easy it is to smuggle weapons past them.  Given the huge cost of these scanners (which got former Obama DHS secretary Michael Chertoff’s firm rich), it would have behooved the US to listen to Israel then, dumping these scanners instead of wasting money on them.

Perhaps the same can be said about Netenyahu’s advice on a border wall?

Fiscal responsibility was abandoned by Presidents Bush and Obama, and clearly Trump has no intention of curtailing monster budget deficits and out-of-control defense and entitlement spending.  With politicians of all kinds either 1) refusing to corral spending, or 2) understanding that they can’t win on a platform of fiscal responsibility (and thus not running on one), government spending is going to continue unimpeded, with hundreds of billions (if not more) being wasteful at best, outright wasted at worst.

Many Americans don’t mind this government shutdown, and applaud Trump for drawing a line in the sand for what amounts to a rather small funding request in the overall scheme of things.  However, “the resistance” is doing this to all of us, as they are so keen on not giving Trump a win, they will risk shutting the government down for what could be months. 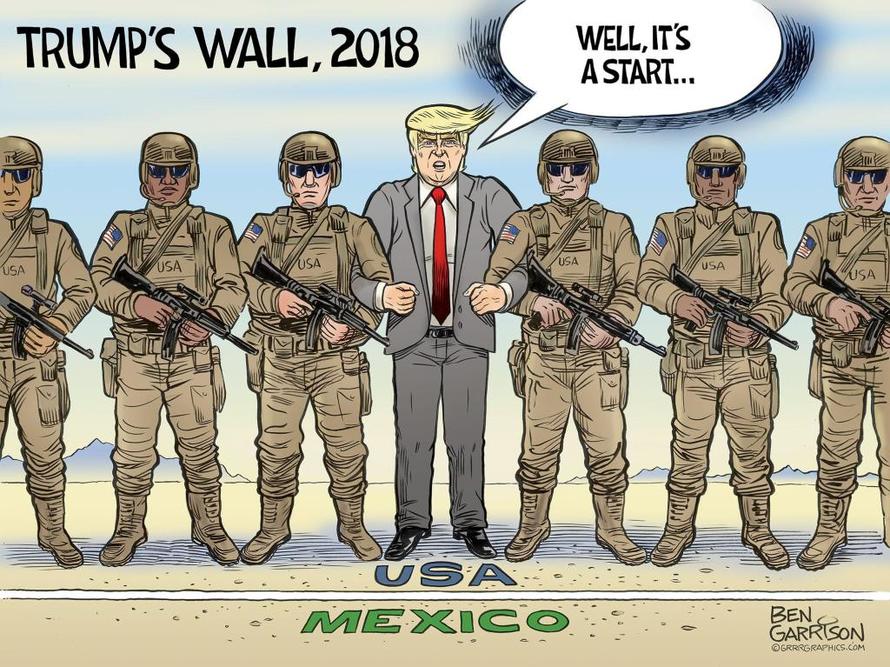 If government money is going to be wasted anyway, why not spend it on a border wall – which the Israelis have a decades-long track record as a worthwhile investment?