Ever since the Trump administration announced that it was no longer recognizing the legitimacy of the elected government of Venezuela I’ve been arguing with people on social media about this president’s brazen coup attempt in that country. The people arguing with me in favor of Trump’s interventionism are almost exclusively Trump supporters, with leftists and antiwar libertarians more or less on my side with this issue and rank-and-file centrists mostly preferring to sit this one out except to periodically mumble something about it being a distraction from the Mueller investigation. 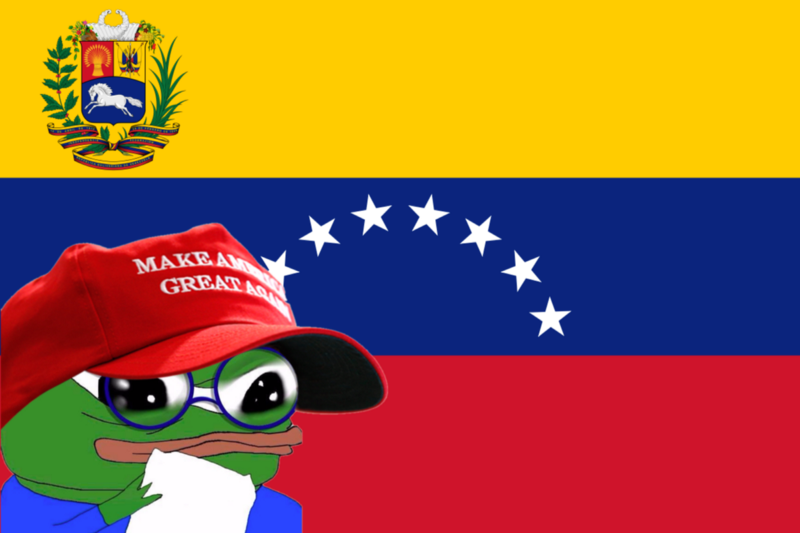 I engage in these arguments not because I enjoy fighting with strangers on the internet, but because it helps me get an idea of what propaganda narratives have been seeded throughout various political sectors. Take a stand online and you’ll quickly have people running up to you saying, in effect, “My media echo chamber told me I’m supposed to disagree with you about that,” and spelling out what they’ve been told to believe.

I have not received a single robust argument in favor of Trump’s Venezuela interventionism, but I have received a whole lot of really, really stupid ones. Here are the top five most common and most astonishingly idiotic of them:

Me: US interventionism is always disastrous and it always lies about its reasons for targeting South American and oil-rich nations.
Tsunami of Trump supporters: SOCIALISM IS BAD THO

This one is easily the most common and most stupid of all the arguments I’ve been receiving. I’m not familiar enough with pro-Trump punditry to be able to describe how the MAGA crowd got it into their heads that attacking Venezuela has something to do with fighting socialism, but it’s clear from my interactions over the last couple of days that that is the dominant narrative they’ve got swirling around in their collective consciousness. Most of my arguments on this issue have either begun as or very quickly spun into an attempt to turn the debate about US interventionism in yet another South American nation into a debate about socialism vs capitalism.

Which is of course absurd. The campaign to topple Venezuela’s government has nothing to do with socialism, it’s about oil and regional hegemony. The US has long treated South America as its personal supply cabinet and destroyed anyone who tried to challenge that, and the fact that Venezuela has the most confirmed oil reserves of any nation on the planet makes it all the more central in this agenda. Yes, the fact that large sectors of its economy are centrally planned means there are fewer hooks for the corporatocracy to find purchase to manipulate it with, but that just helps explain why the US is targeting it with more aggressive measures, it doesn’t excuse the aggressive targeting. Venezuela does not belong to the United States, and attempting to control what happens with its resources, its economy and its government is an obscene violation of its national sovereignty.

Trying to turn a clean-cut debate about US interventionism into a debate about socialism is like if your family found out that your sister had just been raped, and you all started bickering about the pros and cons of feminism instead of focusing on the crime that had just happened to your loved one. It wouldn’t matter what kind of economic system Venezuela had; trying to overthrow its government is not okay. The narrative that this has something to do with championing capitalism is just a hook used to get Trump’s base on board with another unconscionable foreign entanglement.

2. “It’s not interventionism! There are no boots on the ground.”

Thread documenting some of the horrific actions facilitated by the Trump administration’s new special envoy to Venezuela. Not for the squeamish.https://t.co/FVWEEDaIwM

Oh yes it is interventionism. Crushing economic sanctions, CIA covert ops, illegally occupying embassies, and a campaign to delegitimize a nation’s entire government are absolutely interventionism, and that is happening currently. It’s stupid to make “boots on the ground” your line in the sand when, for example, vast amounts of US resources can easily be poured into fomenting a “civil” war that could kill hundreds of thousands and displace millions as we saw with Syria. And from today’s news about the Trump administration’s appointment of bloodthirsty psychopath Elliot Abrams as the special envoy to Venezuela, it’s very reasonable to expect things to get a whole lot bloodier. Modern warmongering isn’t limited to the form of “boots on the ground”, and making that your litmus test is leaving yourself open to all the same disasters ushered in by the Obama administration.

I have many critiques- from the left- of the Venezuelan govt.

But in no way should anyone support a US backed- or Ruling Class backed- opposition and coup.

The argument ppl starved by US sanctions should support a US backed unelected leader to stop US sanctions is just crazy.

I’ve never entered into any kind of argument about whether or not Nicolas Maduro is a nice person, because it’s not my game. If I spent all my time analyzing the quality of all the world’s governments I’d never get anything done; I focus my time and energy on the imperialism of the US-centralized power alliance because I see it as the single most dangerous force in the world. I’ve got no more reason to go picking apart the quality of Venezuela’s government than I do any other country in the world, yet my arguments against US interventionism in Venezuela are consistently met with a tsunami of social media posts about what a bad, bad man Maduro is.

I refuse to legitimize that false argument. It doesn’t matter whether Maduro is a saint or the worst person in the world; Venezuela is a sovereign nation and US regime change interventionism is always disastrous. Completely ignoring the obvious fact that the empire always launches an aggressive propaganda campaign to manufacture support for the elimination of its targets, there is no valid reason to support that targeting. Trying to drag the conversation into a debate about just how bad Maduro is is an attempt to legitimize an agenda that has no validity.

4. “I support the Venezuelan people!”

Tfw you care deeply about democracy in Venezuela pic.twitter.com/63TB5Kom4Z

Again, that’s not the argument. The argument is whether it’s okay for the US government and its allies to violate Venezuela’s sovereignty with starvation sanctions, CIA covert ops, an active campaign to delegitimize its government, and possibly much worse in the future in order to advance the agenda of overthrowing its political system.

Of course there are people in Venezuela who don’t like their government; that’s true in your own country too. That doesn’t make it okay for a sprawling imperialist power to intervene in their political affairs. You’d think this would be obvious to everyone, but over and over again I run into people conflating Venezuelans sorting out Venezuelan domestic affairs with the US-centralized empire actively meddling in those affairs.

The US government doesn’t give a shit about the Venezuelan people; if it did it wouldn’t be crushing them with starvation sanctions. It isn’t about freedom, and it isn’t about democracy. The US backs 73 percent of the world’s dictatorships because those dictators facilitate the interests of the US power establishment, and a leaked State Department memo in 2017 spelled out the way the US government coddles US allies who violate human rights while attacking nonconforming governments for those same violations as a matter of policy. Acting like Trump’s aggressions against Venezuela have anything to do with human rights while he himself remains cuddly with the murderous theocracy of Saudi Arabia in the face of intense political pressure is willful ignorance at this point, and it’s inexcusable.

5. “You don’t understand what’s going on there! I talk to Venezuelans online!”

This is too perfect.

First of all, this common argument is irrelevant for the reasons already discussed here; sure there are Venezuelans who don’t like their government, but their existence doesn’t justify US interventionism. Secondly, it’s a known fact that online trolls will be employed to help manufacture support for all sorts of geopolitical agendas, from Israel’s shill army to the MEK terror cult’s anti-Iran troll farm to the Bana Alabed psyop for Syria. And here’s this example, just for your information, of a Twitter account talking about how much fun she’s having in Paris and then a few days later claiming she’s in Venezuela waiting in “5+ hour queues to buy a loaf of bread.” Be skeptical of what strangers on social media tell you about what’s happening inside a nation that’s been targeted by the empire, please.

And that’s about it for this article. Let’s all try and talk about this thing with a little more intelligence and sanity, please.