… moments ago, his chief economic advisor when asked by Fox News to explain today’s disastrous, worst-in-9-years retail sales number, picked up on his boss’ phrasing, and claimed it was due to, drumroll, a glitch.

And following the market’s sharp drop today, when first the dismal retail sales then a WSJ report that US-China talks are “deadlocked”, Kudlow’s uttering of the magic word, appears to have stabilizied stocks for now

That said, the Kudlow narrative wasn’t all smoke and mirrors, and he correctly said that the retail sales were affected by the government shudown:

… just as we showed was indeed the case earlier this week: 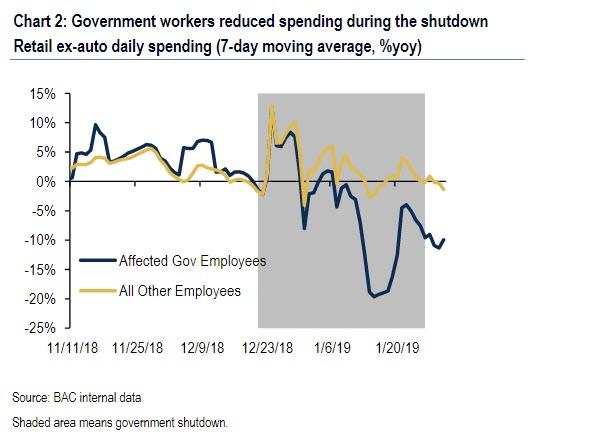 Kudlow then touched on Turmp’s on again/off again central bank nemesis, the Federal Reserve, saying that he is “delighted” the Fed is on hold and hopes Powell will step aside:

Finally, in some not so good news, Kudlow also said that while US trade negotiators in Beijing are meeting with Xi tomorrow amid a “good vibe”, contrary to earlier reports, no decision has been made yet on extending the tariff deadline:

So far, Kudlow’s verbal intervention has been successful, and the market drop has been arrested with the S&P hoping to regain the 200DMA.