Venezuelan President Nicolas Maduro has penned an open letter to the people of the United States, warning that Washington is “willing to send their sons and daughters to die in an absurd war,” and that Venezuelan patriots “shall defend our homeland with all the pieces of our soul.” 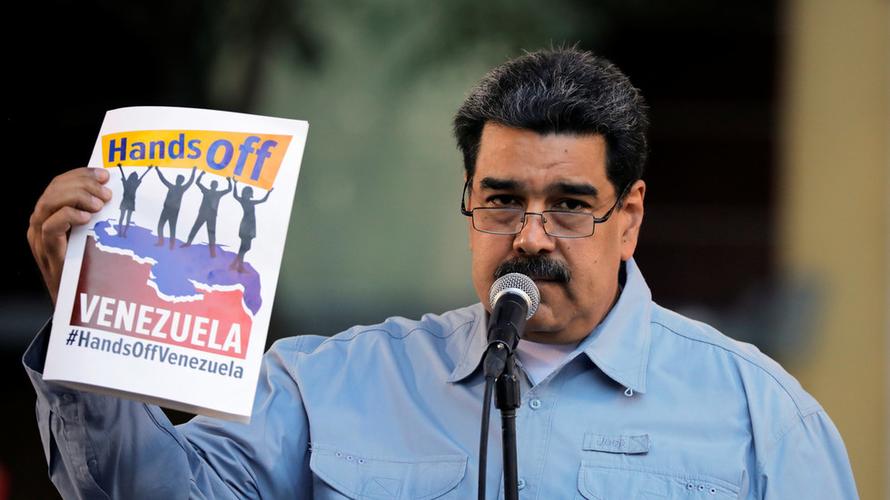 Maduro posted an image of the letter to Twitter, which he said would be delivered to the White House “to demand respect for our unwaivable right to peace.”

Slamming US President Trump’s aggressive statements “disrupting noble dialogue initiatives” promoted by Uruguay and Mexico, and backed by the Caribbean Community (CARICOM), Maduro warned of “dramatic consequences,” and compared the current situation to the US involvement in Vietnam and the fake WMDs in Iraq.

They want to invade and intervene in Venezuela – they say, as they said then – in the name of democracy and freedom. But it’s not like that. The history of the usurpation of power in Venezuela is as false as the weapons of mass destruction in Iraq. It is a false case, but it can have dramatic consequences for our entire region. -Nicolás Maduro

Maduro has demanded that the US stop its aggression towards Venezuela, including trying to “suffocate our economy,” and “the serious and dangerous threats of military intervention.

Earlier this week images of a massive blockade on a major highway link with Colombia made headlines, as the Venezuelan military used truck trailers and shipping containers to stop aid (and probably a ton of weapons) from entering the country and falling into the hands of the self-recognized interim president, Juan Guaidó.

The Venezuelan people desperately need humanitarian aid. The U.S. & other countries are trying to help, but #Venezuela’s military under Maduro’s orders is blocking aid with trucks and shipping tankers. The Maduro regime must LET THE AID REACH THE STARVING PEOPLE. #EstamosUnidosVE pic.twitter.com/L4ysYJaM6H

He was sworn in for his new term last month, but the National Assembly, controlled by opposition parties, called Mr. Maduro’s government illegitimate. The Assembly’s leader, Juan Guaidó, declared himself interim president last month and promised to organize new elections.

The United States and dozens of other countries have recognized Mr. Guaidó.

The aid shipment represents a challenge to Mr. Maduro’s authority and to his ability to provide for the nation. (“We are not beggars,” he recently said.) For his opponents, it is a test of their ability to deliver on promises and to win supporters. –New York Times

The United States and dozens of other countries have recognized Guaidó as the leader of Venezuela, after the National Assembly – controlled by Venezuela’s opposition parties – called Maduro’s government illegitimate.

An Open Letter to the American People from President Nicolas Maduro

If I know anything, it is about peoples, such as you, I am a man of the people. I was born and raised in a poor neighborhood of Caracas. I forged myself in the heat of popular and union struggles in a Venezuela submerged in exclusion and inequality. I am not a tycoon, I am a worker of reason and heart, today I have the great privilege of presiding over the new Venezuela, rooted in a model of inclusive development and social equality, which was forged by Commander Hugo Chávez since 1998 inspired by the Bolivarian legacy.

We live today a historical trance. There are days that will define the future of our countries between war and peace. Your national representatives of Washington want to bring to their borders the same hatred that they planted in Vietnam. They want to invade and intervene in Venezuela – they say, as they said then – in the name of democracy and freedom. But it’s not like that. The history of the usurpation of power in Venezuela is as false as the weapons of mass destruction in Iraq. It is a false case, but it can have dramatic consequences for our entire region.

Venezuela is a country that, by virtue of its 1999 Constitution, has broadly expanded the participatory and protagonist democracy of the people, and that is unprecedented today, as one of the countries with the largest number of electoral processes in its last 20 years. You might not like our ideology, or our appearance, but we exist and we are millions.

I address these words to the people of the United States of America to warn of the gravity and danger that intend some sectors in the White House to invade Venezuela with unpredictable consequences for my country and for the entire American region. President Donald Trump also intends to disturb noble dialogue initiatives promoted by Uruguay and Mexico with the support of CARICOM for a peaceful solution and dialogue in favour of Venezuela. We know that for the good of Venezuela we have to sit down and talk, because to refuse to dialogue is to choose strength as a way. Keep in mind the words of John F. Kennedy: “Let us never negotiate out of fear. But let us never fear to negotiate”. Are those who do not want to dialogue afraid of the truth?

The political intolerance towards the Venezuelan Bolivarian model and the desires for our immense oil resources, minerals and other great riches, has prompted an international coalition headed by the US government to commit the serious insanity of militarily attacking Venezuela under the false excuse of a non-existent humanitarian crisis.

The people of Venezuela have suffered painfully social wounds caused by a criminal commercial and financial blockade, which has been aggravated by the dispossession and robbery of our financial resources and assets in countries aligned with this demented onslaught.

And yet, thanks to a new system of social protection, of direct attention to the most vulnerable sectors, we proudly continue to be a country with high human development index and lower inequality in the Americas.

The American people must know that this complex multiform aggression is carried out with total impunity and in clear violation of the Charter of the United Nations, which expressly outlaws the threat or use of force, among other principles and purposes for the sake of peace and the friendly relations between the Nations.

We want to continue being business partners of the people of the United States, as we have been throughout our history. Their politicians in Washington, on the other hand, are willing to send their sons and daughters to die in an absurd war, instead of respecting the sacred right of the Venezuelan people to self-determination and safeguarding their sovereignty.

Like you, people of the United States, we Venezuelans are patriots. And we shall defend our homeland with all the pieces of our soul. Today Venezuela is united in a single clamor: we demand the cessation of the aggression that seeks to suffocate our economy and socially suffocate our people, as well as the cessation of the serious and dangerous threats of military intervention against Venezuela. We appeal to the good soul of the American society, victim of its own leaders, to join our call for peace, let us be all one people against warmongering and war.

Long live the peoples of America!

President of the Bolivarian Republic of Venezuela