A new Bloomberg report begins by noting, “As with Assad eight years ago, it’s hard to find an analyst or Western official predicting Maduro’s long-term survival.” Given that the professional class of “analysts” tends to get just about everything wrong, it seems safe to bet on Maduro lasting much longer than anyone is currently predicting. Pundits and politicians seeking regime change also have a penchant for wishfully exaggerating the degree to which popular unrest and external pressures actually erode and crack the regime, and still very loyal military.

Like with Syria before, the headlines on Venezuela are moving much faster that the reality inside Caracas. Also like with Syria, pundits who have little to no awareness of what the Latin American country looks like on the ground will still arrogantly make their inflated prognostications from thousands of miles away from the Venezuelan streets. For this reason if some lone military attaché at the Venezuelan embassy in D.C. defects, it generates breathless headlines foretelling a supposedly imminent snowball effect of mass army defections: Losing Grip on Power… one ABC headline excitedly stated after the officer’s declaration of support for Juan Guaido. 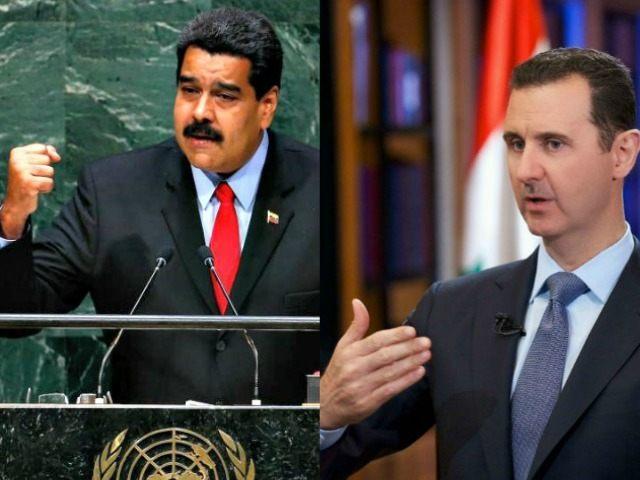 Will we still be told “regime collapse imminent!” in Venezuela a year or two from now? As was the case for years running with Assad? Indeed the Syria-Venezuela parallels are striking, but it’s perhaps more a story of the mainstream media’s ignorance and conceit, or it could in some cases be mainstream journalism jumping on the Washington psyop band wagon: prematurely creating an atmosphere of paranoia and fear that regime collapse is imminent can help induce those very conditions.

Bloomberg explores the clear parallels in the following:

As hundreds of thousands of his citizens took to the street demanding his departure, governments everywhere called on the president to step down. Neighboring states absorbed those who fled, creating a refugee crisis. Its oil was embargoed, its embrace of socialism derided. “This regime is the equivalent of a dead man walking,” a top U.S. official told Congress.

No, Syria in 2011, when you had to look pretty hard for an analyst or Western official who believed President Bashar al-Assad could survive the combined assault of domestic revolt and international boycott. Although the U.S. recognized the Syrian opposition as the legitimate representatives of the nation, Assad remains in the presidential palace in Damascus, stronger than ever.

Actually there were plenty of analysts around who got Syria right from the beginning, but mainstream discourse tended to push them to the side in favor of sensationalism, moralistic fake romanticized narratives, and wishful thinking.

Amidst a flurry of current hyped reporting that sounds cocksure Maduro’s swift exit will occur at any moment, Bloomberg takes a moment to urge caution: “And while the odds remain high that Maduro will be driven out — perhaps even quickly — the parallels with Assad and Syria are worth pondering as a cautionary tale.” The report adds another key parallel that like with Syria before could make a huge difference in the Maduro government’s fate: “The only significant country pledging backing for the regime is Russia,” remarks Bloomberg.

But then there are important differences between Syria and Venezuela, not the least of which is that the nature of the hardened Islamist and al-Qaeda “opposition” in Syria meant the western public slowly turned against the idea of regime change. There’s nothing equivalent in the case of Venezuela:

In Syria, many have been more afraid of the opposition, much of it Islamist, than of Assad, said Vali Nasr, dean of the School of Advanced International Studies at John Hopkins University. Venezuela looks more like Egypt in 2011 than Syria, he said.

And further there’s the regional pressures in Venezuela, with no powerful ally to step up against pro-coup forces in the region (like Iran in Syria’s case):

In Latin America, a slew of leftist populist governments like Venezuela’s has been rapidly replaced through elections by pro-market conservatives. These include Brazil, Peru, Chile and Argentina. How can a holdout like Maduro survive?

Most analysts still say he can’t.

“When I think about Maduro, I’m reminded of the guy who jumped off a 15-story building,” noted Aaron David Miller, who worked on Middle East peace at the State Department and is now at the Wilson Center, a Washington think tank. “As he passed the eighth floor, he was asked how he was doing and replied, ‘So far so good.”’

The key factor could be economic, as oil remains the biggest — we could almost say sole — source of revenue for Caracas.

Bloomberg concludes on this point, “Unlike Syria, the Venezuelan state relies for income almost exclusively on oil sales, especially to the U.S., and Washington’s recently announced boycott could prove crippling.”

The oil factor indeed could make all the difference; however, as is also the case with Syria, the people on the streets will surely feel the pain and full impact of sanctions long before the corrupt elites in Caracas go down.