The Kentucky teenager at the center of a media circus has spoken out after receiving death threats over a widely misreported incident with an Obama tribal elder on the steps of the Lincoln Memorial in Washington D.C. 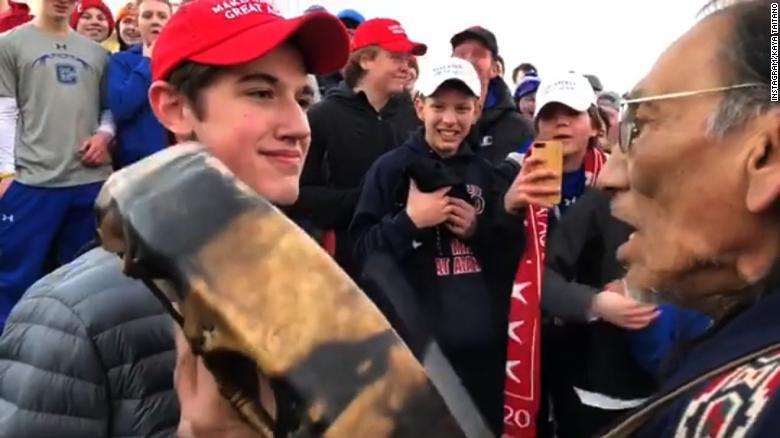 “I am the student in the video who was confronted by the Native American protester,” reads a statement by Nick Sandmann, the Covington Catholic High School junior who was initially accused of taunting the drum-beating activist, prominent activist Nathan Phillips, only to be vindicated after the full video revealed that the Native American troupe approached the teens amid a tense standoff with a group known as the Black Hebrew Israelites, while the teens peacefully held their ground.

Sandmann has become the face of the apparent confrontation, smiling silently only a foot or two from the face of Nathan Phillips, a Vietnam War veteran and prominent activist for indigenous people’s causes.

Critics have characterized the young man as smirking and trying to stare down Phillips. But other, longer videos have complicated the narrative, suggesting that there was jeering by a separate group of people before the incident recorded on the most widely circulated video. –NBC News

Here is a video clearly showing that Nathan Phillips approached the students. On the basis of the evidence we now have, I believe that people who issued categorical and one-sided condemnations of the students should retract and apologize. pic.twitter.com/GxmXcMuQgC

Sandmann says that when his group arrived at the Lincoln Memorial, he heard “four African American protesters” who were hurling “derogatory insults at our school group,” including “racists,” “bigots,” “white crackers,” “faggots,” and “incest kids.”

“They also taunted an African American student from my school by telling him that we would ‘harvest his organs,” Sandmann wrote, adding “I have no idea what that insult means, but it was startling to hear.”

The teen added that he obtained a teacher’s permission to lead the group of students in school spirit chants “to counter the hateful things that were being shouted at our group,” after which the Native American protesters approached.

“I never interacted with this protestor. I did not speak to him. I did not make any hand gestures or other aggressive moves. To be honest, I was startled and confused as to why he had approached me. We had already been yelled at by another group of protestors, and when the second group approached I was worried that a situation was getting out of control where adults were attempting to provoke teenagers,” says Sandmann.

“I believed that by remaining motionless and calm, I was helping to diffuse the situation,” he said. “I realized everyone had cameras and that perhaps a group of adults was trying to provoke a group of teenagers into a larger conflict. I said a silent prayer that the situation would not get out of hand.”

Sandmann says he has received death threats over the incident.

“I have received physical and death threats via social media, as well as hateful insults. One person threatened to harm me at school, and one person claims to live in my neighborhood. My parents are receiving death and professional threats because of the social media mob that has formed over this issue.”

Sandmann and his family deactivated their social media accounts Saturday as the incident went viral – with many prominent liberals calling for his doxxing or worse.

Ps. The reply from the school was pathetic and impotent. Name these kids. I want NAMES. Shame them. If you think these fuckers wouldn’t dox you in a heartbeat, think again. https://t.co/IS80wiaQ7v

Isn’t it weird that someone who fantasizes about murdering children is allowed to work for a company whose target demographic is children? @Disney why do you allow someone like @Jack_Morrissey to represent you and your brand? pic.twitter.com/IMyWgd5ouX

Some media personalities such as CNN‘s Ana Navarro have yet to delete wildly inaccurate tweets with the initial mischaracterization of the incident. “Must Watch: Native-American elder taunted by racist MAGA-hat wearing teens,” tweeted Navarro.

Must Watch: Native-American elder taunted by racist MAGA-hat wearing teens, speaks and cries for America, the country he defended and sacrificed and wore the uniform for. It is people like Nathan Phillips who make America great.
Thank you for your dignity, sir. https://t.co/Kae7lgAFrk

Omaha elder and Vietnam War veteran Nathan Phillips endured hateful taunts with dignity and strength, then urged us all to do better.

Listen to his words: https://t.co/ymHRxVA91K

Alyssa Milano continues to virtue signal in this still-active tweet:

This is Trump’s America. And it brought me to tears. What are we teaching our young people? Why is this ok? How is this ok? Please help me understand. Because right now I feel like my heart is living outside of my body. https://t.co/QMxMDxNjvr

The National Review – in a now-deleted article from deputy managing editor Nicholas Frankovich titled “The Covington Students Might as Well Have Just Spit on the Cross,” wrote that the teenagers mocked a “frail-looking older man” and “gloat in their momentary role as Roman soldiers to his Christ.”

Except that’s not what happened at all.

“I am mortified that so many people have come to believe something that did not happen — that students from my school were chanting or acting in a racist fashion toward African Americans or Native Americans,” said Sandmann.

“I did not do that, do not have hateful feelings in my heart, and did not witness any of my classmates doing that,” he said, adding: “I have read that Mr. Phillips is a veteran of the United States Marines. I thank him for his service and am grateful to anyone who puts on the uniform to defend our nation. If anyone has earned the right to speak freely, it is a U.S. Marine veteran.”

Covington Catholic High School and the Catholic Diocese of Covington, Near Cincinnati, said in a joint statement “The matter is being investigated and we will take appropriate action, up to and including expulsion.”

The diocese and the school said the students were in Washington to attend the March for Life, a major anti-abortion rally, and they lamented that the incident had “tainted the entire witness of the March for Life.”

They said they extended “our most sincere apologies to all those who attended the March and all those who support the pro-life movement.” –NBC News

On Sunday Philips told MSNBC‘s Joy Reid that he was trying to diffuse the situation between the teens and the Black Hebrew Israelites, described by NBC as “a loose association mostly of people of black African ancestry who say they are descendants of the biblical Israelites.”

Philips says the boys in the MAGA hats began chanting “build the wall,” which cannot be heard on the video.

Meanwhile, some have called into question the Native American activist’s claim to be a Vietnam Veteran.

From a wise friend:
“He claims to be 64, meaning latest he could have been born was Jan., 1954, turning 18 in jan., 1972. The last US troops left nam in march 1973. Final 14 mo of war were major drawdown with few new deployments. With training it becomes virtually impossible.” https://t.co/xn4gzNMfpa

In the wake of the MSM’s kneejerk reaction, several prominent Twitter conservatives have come together to offer legal help to the Covington High teens.

I’m livid and have a full team on this. Families will be offered coverage, pro bono PR and legal.#MAGAkids #Magateen #MAGAboys

When the media launches a fake news smear campaign against you but you’re just trying to MAGA. pic.twitter.com/ZaP78ytmnH