It started out as yet another disappointing day, with Asian markets going nowhere and Europe in the doldrums, dragged lower by the Dax and European auto and bank stocks following poor HSBC earnings and fears about US auto tariffs on European car exports. However, the mood quickly reversed – in very thin volume with the S&P trading about 20% below its 30DMA – after Walmart’s stellar which pushed the stock to its 5th best day in the past 2 years … 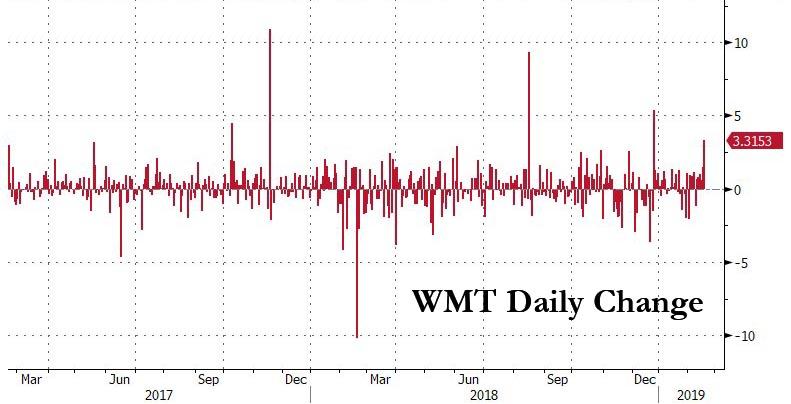 … boosted consumer shares, even as Treasuries once again refused to confirm the stock bullishness, sending 10% yields as low as 2.635%, led by the belly of the curve, as the bond market – unlike stocks – remains concerned that the trade truce will end March 1 without a deal, resulting in fresh tariffs.

Stocks got a second, and then a third wind, after first Cleveland Fed president Loretta Mester echoed what Lael Brainard said recently, when the former hawk urged an end to the Fed’s balance sheet unwind later this year, and then Trump spoke to reported, saying March 1 is not a magical date for the China trade deal, giving traders fresh hopes that trade talks with China could be extended and tariffs won’t automatically “spring” on March 1.

While today’s rally was relatively muted, it was sufficient to send the market into overbought territory, with the RSI rising above 70 for the first time since August, making further gains from here that much more questionable, especially if investors continue to sell stocks and equity ETFs as they have for the past 8 weeks. 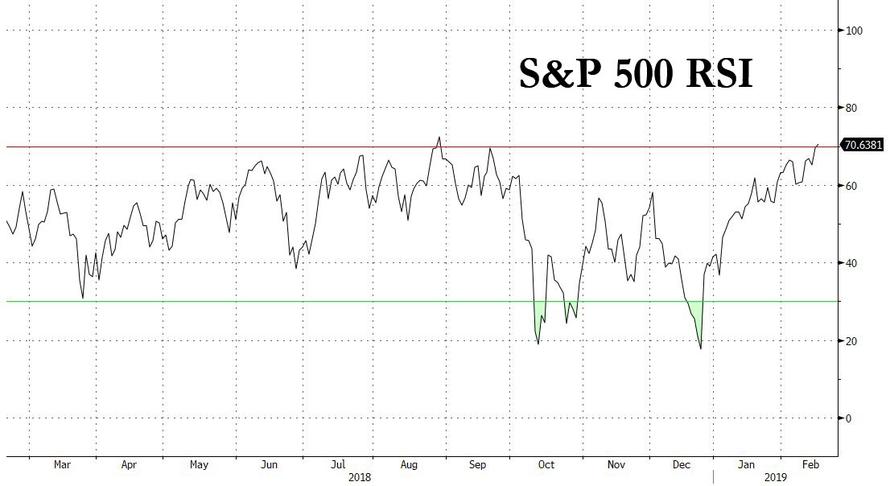 Earlier in the day, China’s currency strengthened against the greenback after a Bloomberg report that the U.S. is pressing for a stable Chinese currency as part of negotiations, which in turn pushed the Aussie dollar to session highs as well. 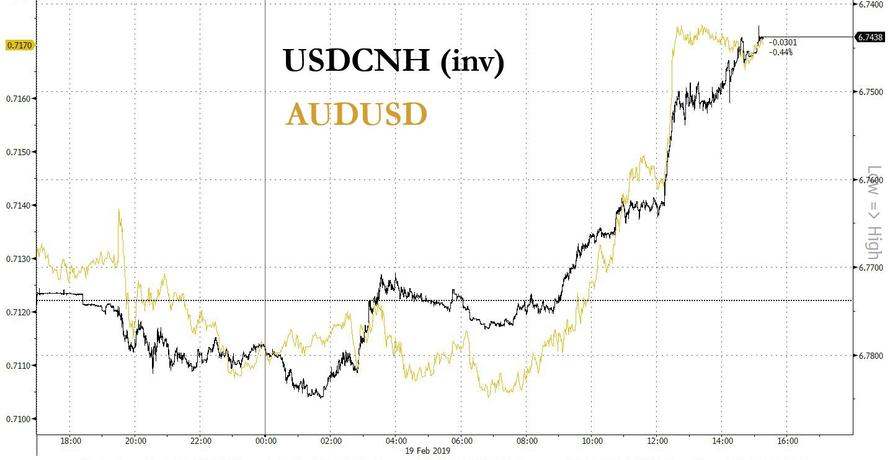 And while Trump’s penchant to ignite momentum and trigger algo buying is well-known with the occasional trade-related keyword, one surprise today was gold’s spike with the precious metal surging above $1,340, the highest price since last April. 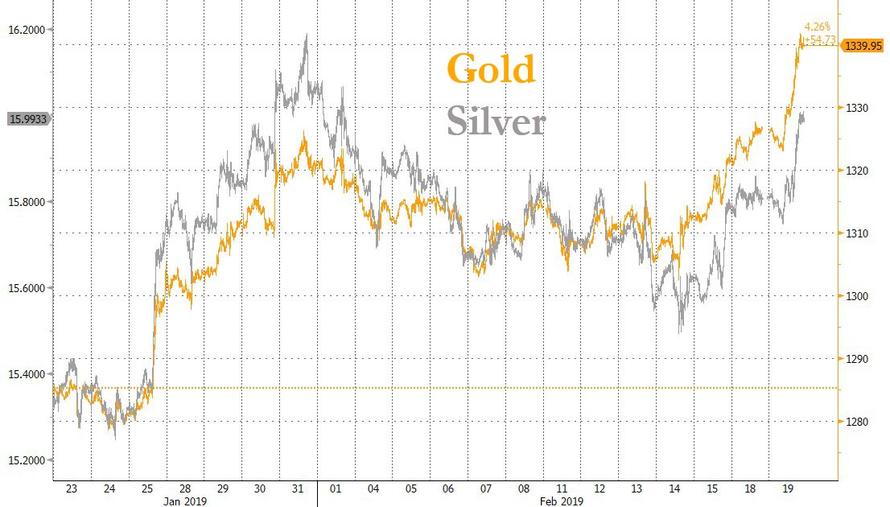 As we first discussed, and as Bloomberg later noted, it’s a bit of a head-scratcher as to why gold is gaining today. There’s no new meltdown in international politics to drive haven flows, inflation is stable and the dollar, while weaker, isn’t moving all that much. Perhaps it really just comes down to the fact that the dollar is weaker. After all, copper is higher and oil is advancing. One obvious catalyst for gold’s surge was Kuroda’s dovish commentary overnight, in which the BOJ head said the central bank may ease more and buy more assets “if necessary”, although other factors cited included “uncertainty surrounding the EU parliament elections, the possibility of Brexit chaos and instability in Venezuela.”

Meanwhile, as we noted and as BBG’s Andrew Cinko picked up, “even more curious is the side-by-side rally of both gold and equities. Over the last four years, gold and the S&P 500 have had a negative 40-day correlation 72% of the time; the latest reading remains negative at -0.26.”

And today’s sizeable 1.6% gain in gold is typically not taken well by equities. When the precious metal has risen by that amount or more since the start of 2015, the S&P 500 was lower 64% of the time (18 of 28 instances), with stocks suffering an average loss of 0.4% (average of all 28 instances). Seeing both of them rise is an aberration — one that probably can’t last no matter what the rationale is for gold’s strength today.

Whatever the reason, and whether gold is no longer a safe asset, ever since the December lows, both gold and stocks have soared, and as many traders have noted, they can’t both be right (unless of course, more QE is imminent). 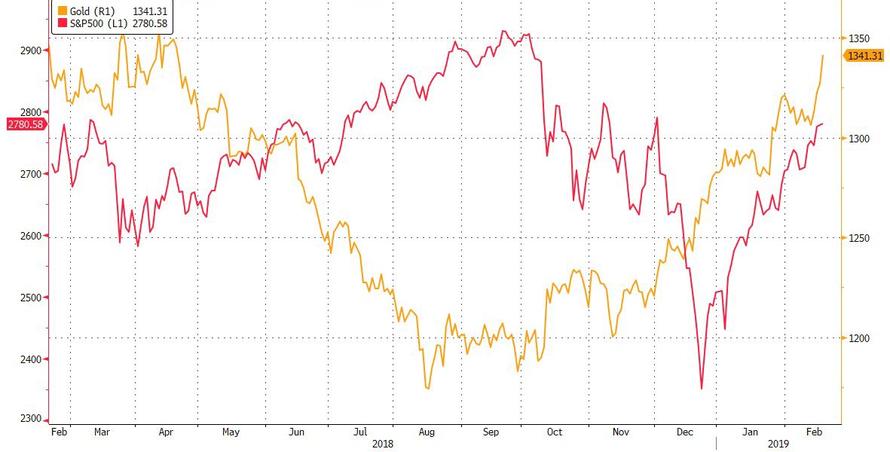 Meanwhile, as gold jumped, the dollar fell erasing an earlier loss, ahead of the FOMC minutes release tomorrow and speeches from Fed officials this week.

Not saying anything traders didn’t know, Kim Forrest, senior portfolio manager at Fort Pitt Capital, said that “there’s a lot going on out there and I think for the most part investors are looking at China and the trade talks. We’ve been down this road a couple of times before — not just this year, but last year as well — and this March deadline is really approaching quickly. That’s really where companies are focused, as we heard today on Walmart, but also investors.”

In other news, after getting hammered for the past few weeks, the pound rose to the highest leve in 2 weeks on reports U.K. and European officials are working on new legal text for the contentious Irish border backstop. 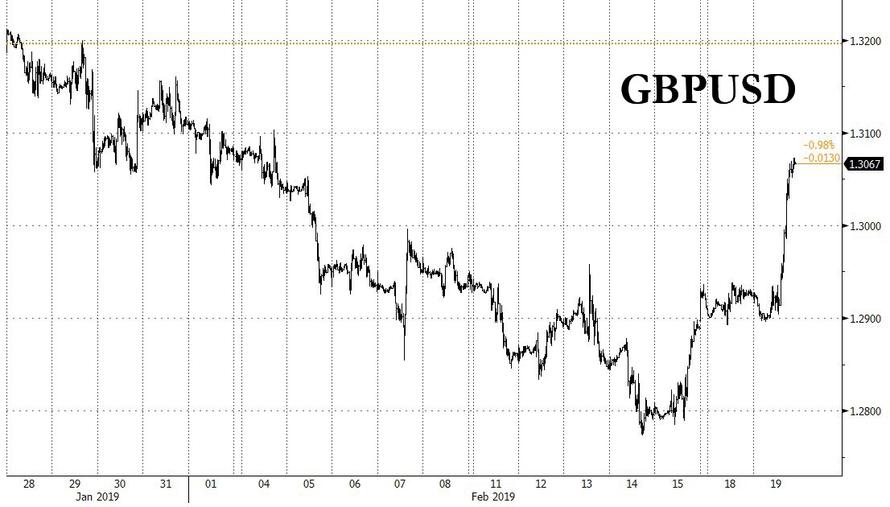 Meanwhile, as we continue to look for just who is buying the market, the SMART index – which collapsed into the end of 2018 – has continued it sharp rebound, and has been straight up virtually every day since December 24 when Steven Mnuchin called the PPT, prompting questions about the reversal in market trading patterns, as the overnight selloff is now more than matched with late afternoon buying, suggesting that pensions funds could be quietly accumulating positions in the late afternoon.