In 2011, there was one state plus Puerto Rico that experienced outright depopulation.  However, by 2018, that number has increased to 9 states(Alaska, Connecticut, Hawaii, Illinois, Louisiana, Mississippi, New York, West  Virginia, Wyoming),plus Puerto Rico that are outright shrinking (chart below). 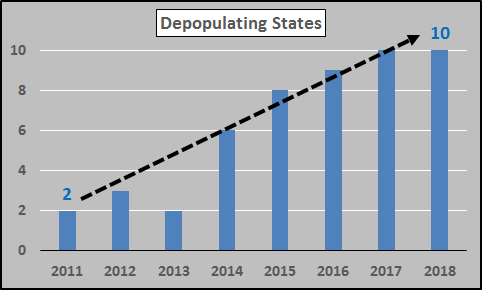 Speaking of Puerto Rico, the flood to the exits appears to be on.  The chart below shows the annual net population declines that began in 2005 & hit warp speed in 2018.  Since 2005, the Puerto Rican population has fallen about 16%!!! 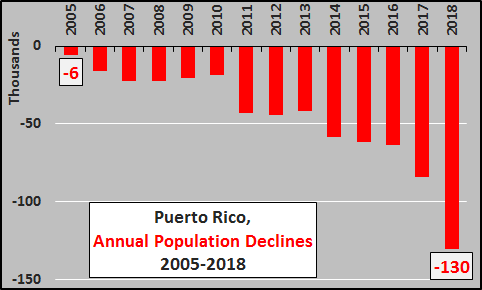 But the chart below shows the change in population among different segments of the Puerto Rican population.  While the 65+yr/old population continues to stay put and grow (+3%), the ramping exodus and collapse among all segments of the under 65yr/old population is of epic proportion.  The chart below only shows through 2017, but through 2018 the under 65 population is down by <-17%>…and these inverse trends are only set to accelerate due to a combination of the decelerating child bearing population, deeply negative birthrates, and ramping emigration. 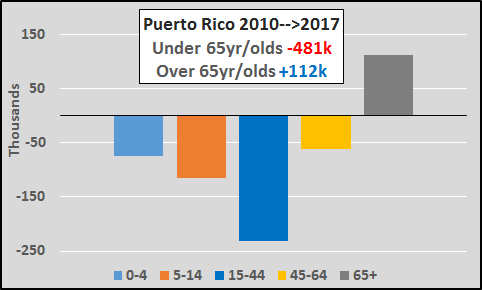 Back on the mainland, West Virginia is the poster child for depopulation.  While the total West Virginia population decline is “just” over -2%, it is the nature of the decline that really matters.  Since 2010, the under 65 population has declined by 91 thousand, or a 5% decline while the 65+ population has risen by over 50 thousand, a 3% increase.  Again, both trends are inversely accelerating. 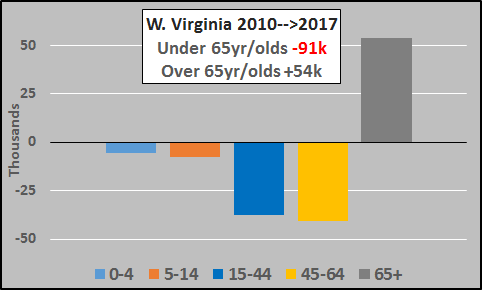 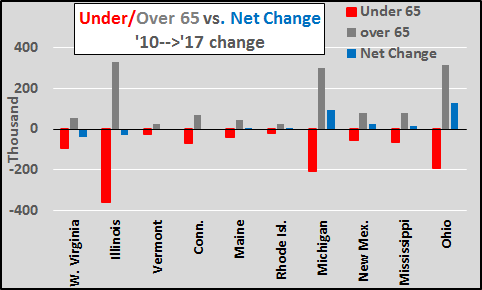 And the next ten states, all with declining under 65 year old populations setting them up to be next in line for net depopulation (below). 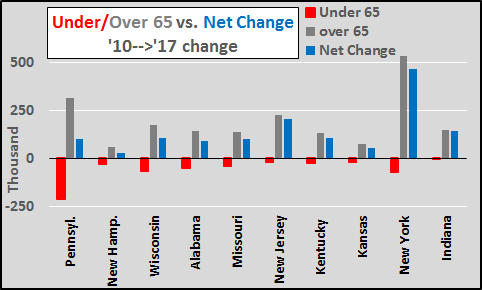 But a national economy is a collection of many small economies, each with it’s own tax base and retirees.  In America, there are 3,142 counties, (including boroughs, parishes, etc.).  What is taking place on top of negative birth rates is an rural to urban flight of young adults in search of opportunity.  This means a relatively small number of urban counties located in major metropolitan centers are growing rapidly (Portland, Boston, Dallas, Houston, the Bay Area, New York, Miami, etc.).  However, the negative birthrates coupled with urban flight is leaving the majority of US counties in outright, net depopulation.  My guesstimate is that 60% to 80% of US counties are in outright depopulation (under 65yr/old populations declining faster than still growing 65+yr/old populations).  Some implications of depopulation among these smallest of economic units (shrinking 0-64yr/olds vs. growing 65+yr/olds):

The 20% of the US population living in rural America who experienced the least economic upside of the booms and bubbles are sadly in line to get clobbered.  Of course, this young rural to urban flight is a boon for urban economies, further boosting demand for housing, rents, jobs, etc.

While Texas, Florida, Washington, Oregon, Utah, Colorado, Arizona, Nevada, the Carolinas, and Georgia all continue to grow well above the national average…there is one typical growth leader that is lagging.  California’s present annual population growth has slowed to levels only seen previously in post recession periods.  If this trend continues, California will soon be joining the depopulation list.  But this isn’t just an American predicament, it is an entirely global affair. 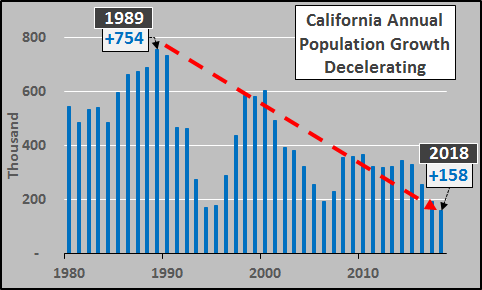 Remembering that modern depopulation is a process that begins with declining births (masked by elderly living decades longer than their predecessors), the chart below shows the global annual births of the nations with per capita incomes above $775/yr.  This is 91% of the worlds population and these nations earn 99% of the income, have 99% of the savings, and consume 99% of earths energy and commodities.  So, the fact that births among this population peaked 30 years ago and continue falling means this declining consumer base (depopulation) is now undercutting global demand.  From 1989 to 1996, these nations experienced a 16% decline in births, then a partial rebound to 2014, but now births are again falling fast. As this significantly smaller consumer base born over 20 years ago, now moves into adulthood, each year represents a significant decline in potential year over year demand.  This includes the US/EU, Japan, Russia, Brazil, China, India, Pakistan, Iran, Mexico, etc. (essentially all nations except for sub-Saharan Africa, Afghanistan, and the poorest of the poor nations).  Even more concerning, the green line in the chart below represents the trajectory if the current downtrends are maintained. 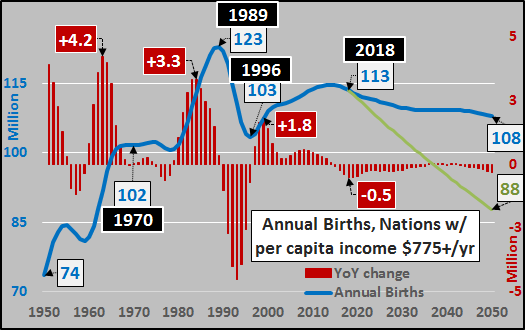 Taking the same nations representing 91% of earths population, but focus upon the annual % change in the 15 to 64yr/old population.  Plot that annual change alongside the Federal Funds Rate and, voila, a very nice match. 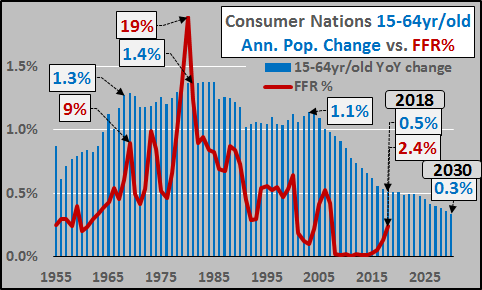 Modern depopulation is a bottom up process that has been underway for decades.   Monetization (central banks creating money with which they “retire” assets) is the inverse action to continue boosting asset prices in the face of depopulation and decelerating demand.  Expect these two trends to inversely accelerate over the coming years…until something breaks.