2018 caused all manner of pain, continuing to bite and scratch and claw until almost the last day of the year. Nothing worked, nearly every asset lost money, and in a final, fitting flourish, the best day to buy was also the hardest (December 24). So long, 2018, you won’t be missed!

So the start to this year has been a great relief. Stocks have rallied, spreads are tighter and the VIX has fallen nearly 10 points. Already one hears an active debate over whether, after such a terrible 2018, the worst is now over and it’s time to press sustainably higher. I’m sceptical, largely because many of last year’s problems remain to be addressed. But that doesn’t mean things need to head south tomorrow, and some trends we’ve seen recently should be here to stay.

Thinking about how long this better tone can last has to start with what’s behind it. Valuations cheapened materially into late December, with US high yield spreads widening to our 2019 base case, the S&P 500 falling to our 2019 bear case and global equities trading below 13x forward earnings. Sentiment, meanwhile, turned quite cautious, with measures like hedge fund net exposure, retail investor sentiment and the slope of the VIX curve moving down near to post-crisis lows.

If valuation and sentiment were the tinder for the rebound, the Fed was the match. After nearly going out of its way in December to suggest policy should stay the course, the Fed’s tone has softened notably to start the year (first with Chair Powell’s remarks on January 4 and later in the FOMC minutes). Equity and credit markets cheered, recouping all their losses since mid-December. But rates markets yawned. On December 31, rates were pricing no Fed hikes over the next two years. Today, after the Fed’s big ‘change of tone’, expectations are almost exactly the same.

And there’s the rub. If we’re counting on the Fed to make the market happy and spark a sustainable rally, we need to answer three questions:

Of course, the data could weaken faster than we expect in 1Q, giving the Fed more leeway. But this carries its own (very obvious) problems, and we think investors are often too quick to forget that, prior to 2010, weaker data and easier policy were a poor backdrop for risk (not a supportive one). In view of this and other fundamental challenges, we think it’s too early to position for a larger, more sustained rally in equities or credit, especially as many markets have already bounced quite meaningfully over the last three weeks. A more meaningful change from the Fed on its balance sheet, or China on its fiscal impulse, would lead us to revisit this view. 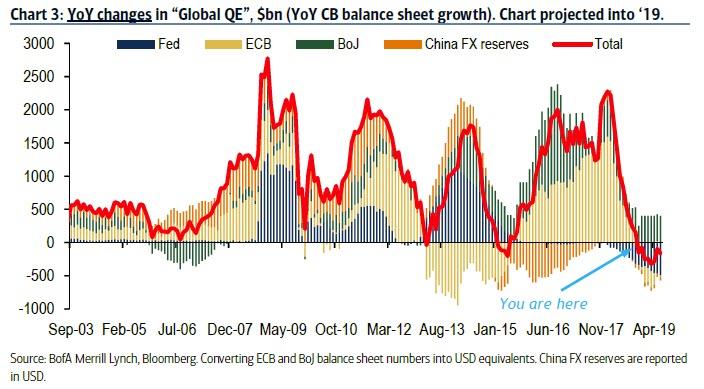 Instead, we’d focus on a number of key shifts occurring beneath the recent volatility. In 2019, we think the US dollar will weaken, rest-of-the-world equities and emerging markets credit will outperform their US counterparts and value will beat growth. All are generally considered ‘higher beta’ strategies that should have underperformed as markets weakened in December. They didn’t, and since then have held on to that performance as markets recovered. We think this speaks to the powerful support from fundamentals and valuations behind these themes, all of which we like owning today, as well as over the full year.

A final word on the Fed before we go. Our rates strategists note a material disconnect between front-end pricing (no hikes) and the level of 10-year real rates (near seven-year highs). If one of these is right, the other seems hard to justify, and our strategists see opportunities in playing a convergence of this disconnect.

2019 is off to a good start, and that’s certainly welcome. But there’s still a lot of year left. 2018 started with a pretty cheerful tone too.