Considering the muted CMBS issuance activity during the recessionary years of 2009 and 2010, you could mistakenly expect a small volume of commercial mortgages to be maturing over the next two years. Total domestic, private-label CMBS issuance clocked in between $168 billion and $230 billion in annually between 2005 and 2007. That figure declined to $2.8 billion in 2009 and $11 billion in 2010. Because most CMBS loans have 10-year terms, the potential volume of refinancing opportunities among existing securitized loans would appear slim.

However, as TREPP notes in a recent research report, thanks to the rising popularity of single-asset transactions, a sizable chunk of shorter-term, floating-rate deals with built-in extension options were completed in recent years. That has added bulk to the maturing load.

Based on a November snapshot, nearly $100 billion of CMBS debt will be up for refinancing between now and 2020, with $40.9 billion and $44.0 billion scheduled to pay off in 2019 and 2020, respectively. And here’s the main risk: Loans against hotels – the property type that is most sensitive to cyclical and demand variability – account for 31% of the maturing volume. 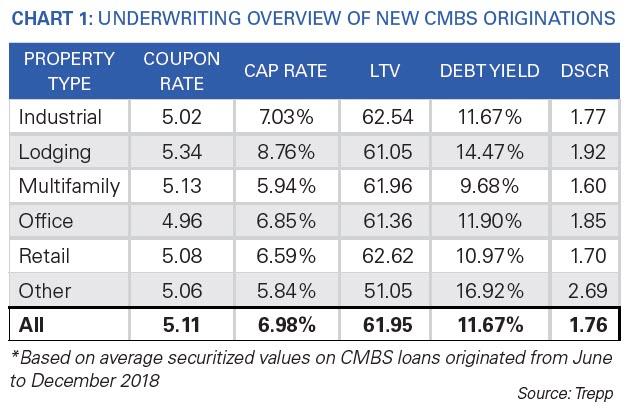 Meanwhile, loans against retail properties make up 22% of the total while office loans account for another 19%. A total of 34% of the loans that are coming due are in conduit deals while 59% are from single-borrower transactions. 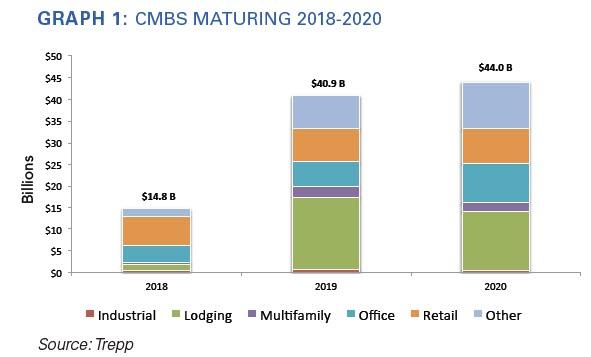 How Will the New Wave of Maturities Fare?

Two years ago, the CMBS analysts at Trepp analyzed the refinancing potential of CMBS loans that were scheduled to come due during the 2015-2017 “Wall of Maturities” period. To assess how these loans would fare, Trepp examined whether they would pass certain refinancing thresholds based on prevailing capitalization rates, loan-to-value figures (LTV), debt service coverage ratios (DSCR), and debt yield requirements.

Given the broad expectations that interest rates will gradually increase, the company updated its refinancing outlook for the next wave of CMBS maturities under various interest rate scenarios.

Trepp reviewed close to $34.7 billion of conduit loans that are scheduled to mature from now through 2020, and then removed all delinquent and fully defeased assets from the universe. (Only counting conduit debt because single-asset loans usually feature low leverage and high DSCR levels, so there is less concern that those notes will not meet refinancing thresholds.) This leaves a sample set of $20.3 billion.

Using average coupon and cap rates from loans originated between June and early December 2018, DSCR and appraised collateral values for maturing loans were calculated based on their current net operating incomes. 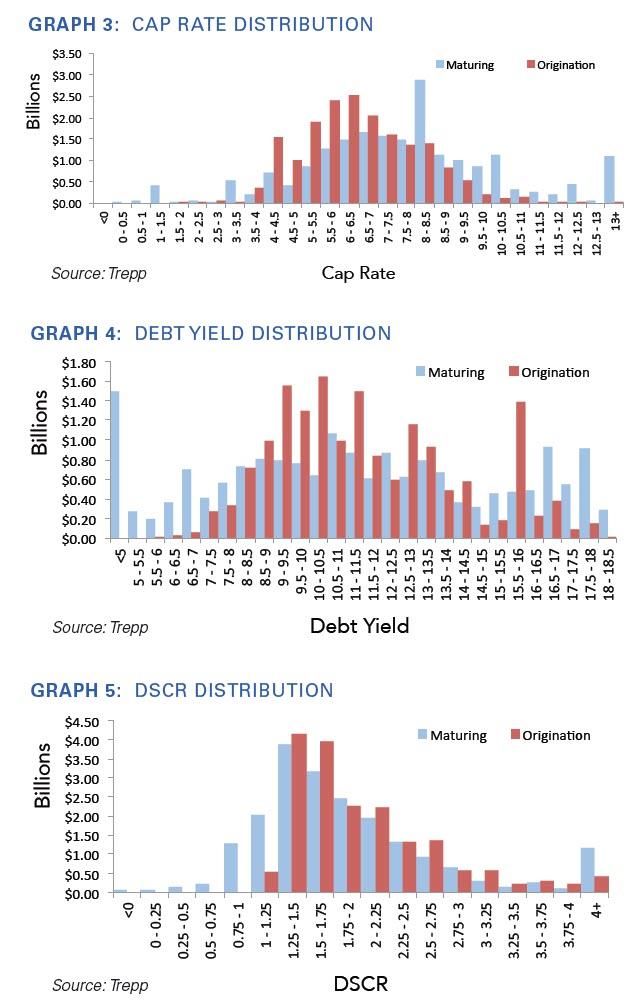 Trepp assumed maturing loans will be taken out by loans that do not amortize and calculated appraised collateral values using average cap rates for recent loan originations. Those appraised values were also used to make loan-to-value calculations. As an additional test, current debt yields were also computed using the most recently published NOI data and outstanding loan balances. With these new loan performance metrics calculated, new DSCR and LTV figures were then determined according to several rate hike assumptions.

In the case of the debt yield test, the threshold for qualifying for a full refinancing was increased by the assumed interest rate jump. Also, those criteria based on lending trends specific to certain metropolitan statistical areas and property types were fine-tuned.

In general, property values decrease and debt service requirements increase when interest rates increase (and all other things remain unchanged). If rates stay where they are, about 74% of the loans (by balance) maturing through 2020 would pass their
respective DSCR thresholds. About 60% would meet or exceed their debt yield requirements while almost 64% would clear their LTV hurdles.

But if rates increase by 50 to 100 basis points, the volume of maturing CMBS loans which would meet each of the three tests would decline by 4% to 15% from the aforementioned pass rates for each category.

A 100-basis-point increase would result in 13% of loans being eliminated from the “refinanceable” bucket in terms of DSCR, moving the total “pass” rate to just more than 60%. 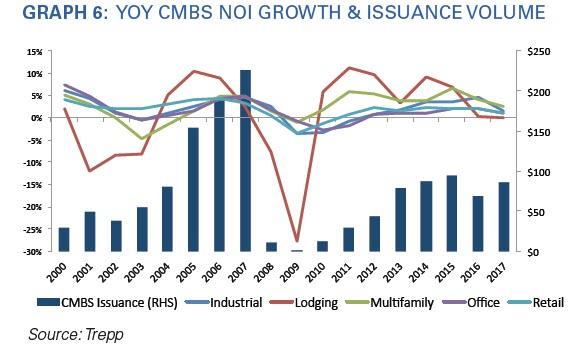 Due to the lower rates on these maturing loans compared to those that were issued roughly a decade ago, they generally carry lower debt service burdens, giving them a larger cushion on the DSCR front. Overall, the qualification results for the debt yield and LTV thresholds were very similar across the various interest rate assumptions. While the LTV test comes out as the slightly more restrictive of the two, both tests yield a 50% pass clip under the highest interest rate scenario.

That said, in the midst of an increasingly volatile macro-economic backdrop, various factors could hinder the market’s ability to digest loan maturities. For instance, spreads on CMBS have widened and impacted that market’s appetite for new originations. Meanwhile, annual NOI growth rates for properties securing existing CMBS loans have slowed, indicating that the commercial real estate market is, indeed, in the late stage of its cycle.