Authored by Thomas Eckert via The Mises Institute,

With the government shutdown now entering its fourth week, it seems that it’s left many political pundits clamoring for an excuse to wash their party’s blame from the situation. Perhaps the most glaring example came from Paul Krugman’s recent New York Times column,“Trump’s Big Libertarian Experiment.” The Nobel-prize winning economist has never been shy about his contempt towards libertarianism, and this column only demonstrates he’s come closer to full-blown lunacy. Because, as I’ll explain, no, this shutdown is not a libertarian experiment. 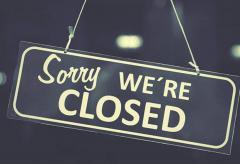 I know many who may be unfamiliar with libertarian philosophy like to think our only concern is hatred for the state, and that anything not inherently pro-government must be essentially libertarian-esque, but that’s not quite the case. Libertarianism, at its core, centers around the recognition of private property rights and a strict adherence to consent and the non-aggression principle (NAP). And already in Krugman’s first paragraph we begin to see his claim of tying this to libertarians unravel, as he admits that while conservatives often echo libertarian rhetoric, they’ve never actually followed through on any of their policies.

Nonetheless, now that it’s Trump who’s allowed a government shutdown (something every president has endured going back to Gerald Ford, but never mind that inconvenient fact), this somehow makes it a libertarian experiment. In other words, what we’re expected to believe is that although these politicians have ignored the advice of libertarians for decades, in most cases doing the exact opposite of what we espouse, now that people are seeing the negative side of their policies as government checks dry up, it is suddenly a libertarian’s dream. The obvious contradiction in that claim should be glaring.

It’s not unlike when we complain about silly, little things like endless wars and deficit spending; issues Democrats and Republicans can’t be bothered with, and we’re inevitably told to move to our utopia — Somalia. What Krugman is implying here is that a nation operating in complete contradiction to libertarian thought (poor regard for the protection of property rights and an inclination towards aggression against others as a political solution) can likewise come crashing down and somehow, this demonstrates it’s exactly what we’ve always wanted — or at least the negative consequences are our fault.

Not so fast though, Krugman.

Because as history shows, it wasn’t libertarians who advocated for any of this. We never lobbied for the government to expand to the point of hiring 800,000 workers that even they deem to be “non-essential.” Neither did we advocate for a massive, $4 trillion annual budget, requiring an ever-expansive debt ceiling just to keep it open, the very reason this experiment of a shutdown began in the first place.

You know who did though? Paul Krugman. With his commitment to Keynesian economics, he has rarely seen an instance of deficit spending he hasn’t liked. Unless of course Trump is in office with a Republican congress; then he’s almost downright libertarian on the deficit.

Ironically, one of the few policy agreements he actually does have with libertarians — a disdain for farm subsidies — is somehow pointed to as a strike against libertarians. Never mind that our use of the term “crony capitalism” here is the exact same as Krugman’s description in his own writing; I wouldn’t hold your breath for Krugman to share any fault now that the checks are no longer being mailed out to the farmers though. I suppose we can overlook the fact that it wasn’t even libertarians who initially enacted those subsidies back during the New Deal; a policy Krugman argues, didn’t go far enough in its spending, calling it only “modestly expansionary.” And I also suppose we ought to ignore the countless politicians who’ve fought to keep these crony policies in place, including the progressive darling, Bill Clinton, who saw to it that farm subsidiesballooned to $30 billion in 1998 by classifying it as “emergency aid.” Never mind that there weren’t any libertarians behind that. But now that people have been made dependent on subsidies and are suffering in their absence, we’re now in a libertarian utopia!

And God forbid we use these libertarian critics’ own argument against them. Who was it that derided Sears’ CEO, Eddie Lampert, for running the company into the ground while still receiving a bonus check? Calling him an “Ayn Rand devotee”? Oh, that was Paul Krugman. While laying off 30,000 people and keeping your bonus is quite immoral, should we expect the same outrage from Krugman in the face of twenty-five times as many federal employees losing their checks as his friends in the Washington elite keep the money flowing in? Of course not. “Blame the libertarians!” goes the broken record.

It’s at this point, however, that Krugman spills the beans about his true agenda all along. As it turns out, he admits that libertarian ideas aren’t a “real” force within the GOP. (who knew?!) Rather, he surmises it’s only a cover story for Republicans’ true plan to distribute wealth to their rich friends — arguably the truest statement made in the entire column.

Now, what libertarian critique would be complete without a fallacious argument about food being poisoned? 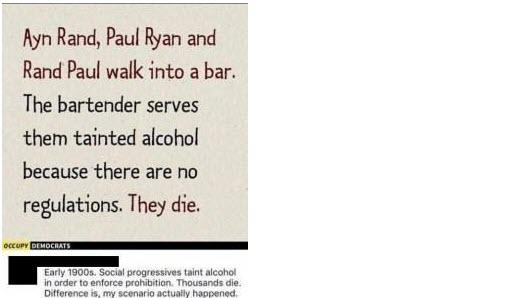 Krugman decides to end his column with the oldest of libertarian strawmen: the insinuation that without the Food and Drug Administration working tirelessly to inspect our food, we’d succumb to the whims of greedy capitalist producers who only wish to poison us. Oddly, you’d think a Nobel economist would grasp the concept of how unlikely and unprofitable it is to intentionally kill off your customers — seeing as how we’re told relentlessly capitalism only cares about profits. What’s more likely is that in the absence of any real arguments comes an appeal to what political hacks do best: fearmongering.

So, does the prospect of contaminated food smell like freedom to us? No, not any more than your attempts to pass blame make this shutdown any sort of “big libertarian” experiment.