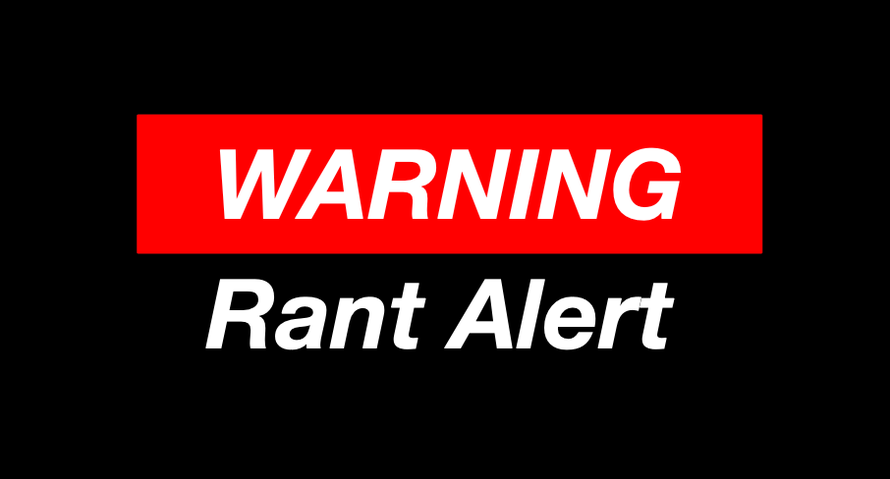 The global central bank easy money experiment has failed and it is past time that central bankers stopped bullshitting us and just admitted it.

Europe is about to enter a recession and rates are still negative, the US Fed just tried to reduce its balance sheet with the greatest economic backwind in years (tax cuts, record buybacks, 3% GDP growth) and still they failed miserably, forced once again to halt all rate hike efforts. After 10 years of being non stop “accommodative” the Fed tried for 3 months to not be accommodative and it blew up in their face as the bottom dropped out of markets.

Only emergency liquidity calls from Cabo by Treasury Secretary Mnuchin and a complete 180 degree reversal by the Fed stopped the bleeding. Again.

And so once again the Fed is asking us to play chase the dot plot. Always dangling higher rate forecast targets that never come to fruition:

Not playing anymore. For 10 years we’ve watched the dot plot being moved further and further into the future only to see it all flat line again now with a renewed halt in rate hikes and an end to reducing the balance sheet. The conclusion is pretty clear:

The Fed is trapped, the ECB is trapped, the BOJ is trapped – all doomed to intervene forever and ever amen always afraid to see markets go through a process of repricing and squeezing out the artificial asset inflation that 10 years of permanent intervention have wrought.

All are too afraid of the next recession and aim to avoid it at all costs. And who can blame them? The prospect of entering a global recession without enough ammunition to deal with it is a frightening prospect.

And don’t think for a minute that the next rounds of stimulus, i.e. QE4 and negative rates, will have the same effect as last time. Already the current effect is very questionable. The US has been stumbling from lower highs on the Fed Funds rate for decades with that stimulus of ever lower rates producing ever less real GDP growth:

The trend is so well established it’s no surprise that markets once again puked once the 10 year yield hit its 30+ year trend line: 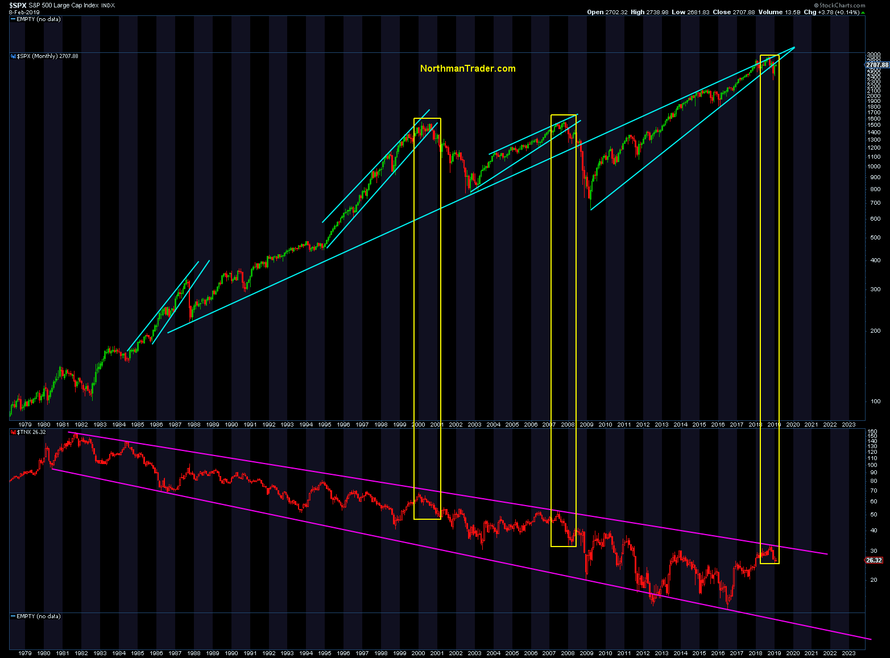 And hence it’s also no surprise that the Fed, desperate to re-inflate asset prices  and to repair the market damage, once again caved as $SPX broke its trend.

If you look at the world through a linear lens they of course stepped in at precisely the spot where they always step in with no sign that liquidity has ever been normalized: 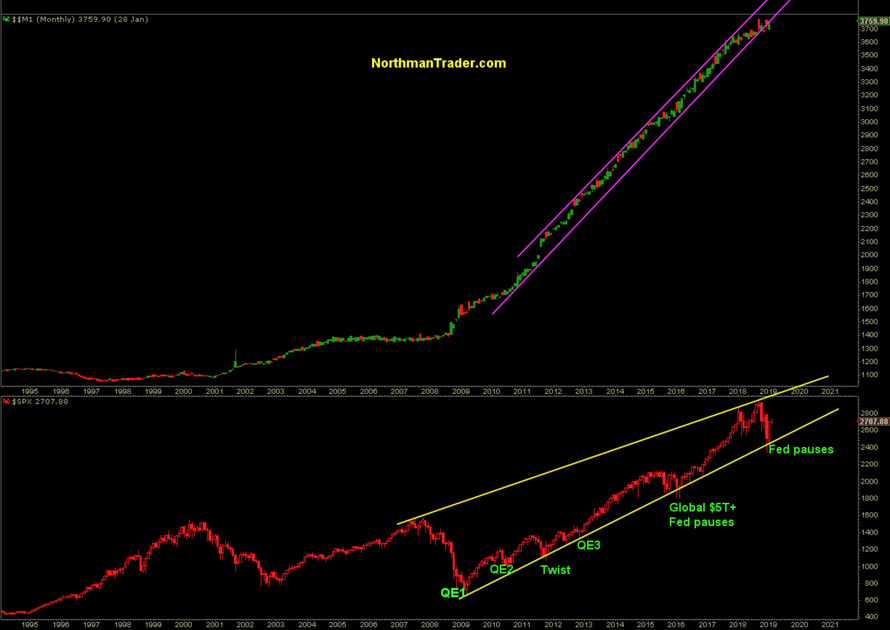 But unlike 2016 there’s no great new stimulus coming and this is precisely why markets are starting to price in rate CUTS, the end of the rate raising cycle. And it’s why Janet Yellen is also already talking about rate cuts.

That’s called the end of the easing cycle and is practically begging for this conclusion:

Hey @federalreserve here’s your trend based dot plot.
Just admit it and we can all move on

Bulls will tell you it’s all bullish, because a dovish Fed has been the spark for higher equity prices for the past 10 years. Problem is the last 3 times the Fed has ended its rate hike cycle and proceeded to an easing cycle a recession soon followed. So the same crowd that told you to buy stocks last year because of global synchronized growth is now telling you to buy stocks because the Fed is now easy due to a global synchronized slowdown that will prove to be temporary. Please.

Talk is already of a ‘melt-up’ either now or after a rate cut:

“Given their reaction, investors now realize the importance of the ‘Powell Put.’ It even raises the possibility of a late-90s-style ‘meltup.’ The question is whether we need another December-style meltdown and Fed rate cuts before markets get bubbly, or whether the policy shift announced so far is already sufficient.”

Problem with that theory is that the Fed appears to be expecting more than a temporary slowdown. See for now the Fed has signaled it might merely halt its balance sheet reduction program:

But if they intend to merely pause or halt its reduction program why are they openly discussing buying bonds again and not on an emergency basis, but on a regular basis? Not kidding:

“U.S. central bankers are currently debating whether it should confine its controversial tool of bond buying to purely emergency situations or if it should turn to that tool more regularly, San Francisco Federal Reserve Bank President Mary Daly said on Friday.”

“Speaking at a town hall in Washington D.C. to a group of educators, the central bank leader said his greatest economic fears lie outside the Fed’s purview. Specifically, he called for more aggressive policies to address income inequality.

“Wages at the middle and lower levels have “grown much more slowly” than those at the higher end, he said. “We want prosperity to be widely shared. We need policies to make that happen,” Powell added”.

Out of the Fed’s purview? Seriously? That’s revisionist history in the making as central bank policies have helped to greatly exacerbate wealth inequality by inflating the asset classes owned by the few. To not acknowledge this is to be revealed to not be serious about the issue.

After all what has screwed the middle class has helped produce the system we have now, a system that produces ever more wealth for the few at the expense of the many.

But you wouldn’t be able to tell this from the Fed pablum about how it only cares about doing a good job for the American people:

Sounds good right? Except public debt to GDP is 104%, corporate debt is over $9 trillion with over half being BBB rated:

But unemployment is low. Times should be good and happy. Instead we see waves of populism borne out of discontentment and fear destabilizing the entire Western World. Populism and nationalism usually come as a result of high unemployment and in the context of recessions and economic angst. It is these environments that breed political extremism and instability. Not now, they are already here.

Consider how our current form of capitalism works:

“Major U.S. banks shaved about $21 billion from their tax bills last year — almost double the IRS’s annual budget — as the industry benefited more than many others from the Republican tax overhaul. On average, the banks saw their effective tax rates fall below 19 percent from the roughly 28 percent they paid in 2016. And while the breaks set off a gusher of payouts to shareholders, firms cut thousands of jobs and saw their lending growth slow“.

Specifically 23 firms boosted dividends and stock buybacks by 23 percent, and they eliminated almost 4,300 jobs. And few have signaled plans to cut thousands more. Why? Because they can and technology enables it, indeed $BAC’s CEO recently boasted how technology allowed him to eliminated over 100,000 jobs at $BAC in the past decade.

The whispers of the future are all around us already: “Artificial intelligence and robotic process automation has helped the firm’s Wall Street divisions cut 84,000 work-hours a year”

His reward? Oh you guessed it:

A 15% wage increase in a year when $BAC stock dropped 15% despite dividends and buybacks:

When $22M a year are not enough, you get a corporate tax cut, lay off more people and make $25.6M per year instead.

“Greed, greed and more f***ing greed and cheap money” was the explanation in the rant of the financial crisis:

See you can’t lose in corporate America. As to the rest, well your real disposable income is stuck in neutral:

But don’t worry, the Fed is ready to give it back to you, the people:

By doing the same thing they’ve done for the past 10 years: Bullshit the people.

Yesterday the IMF warned of a global economic “storm” as growth undershoots even their downward revisions from January. Paul Krugman is now warning of a recession. Morgan Stanley just slashed euro zone 2019 GDP forecast to 1.0% from 1.6% a not trivial cut. The bank also cut inflation, bond yield & euro forecasts, and pushes out ECB’s first rate hike to June 2020.

Given this backdrop I have to ask this question:

Q: What happens when we enter a recession with over 100% public debt to GDP, over $9 trillion in corporate debt and a Fed still carrying a $4 trillion balance sheet?

And it’s really true, nobody knows and neither would we know the efficacy of any renewed central bank measures, although for now one must acknowledge their awesome power once again as complete policy capitulation has again managed to re-inflate the assets owned by the few:

Wealth inequality is just terrible, but we only care about doing a good job for the American people. Don’t you know?

It all rings hollow. And central bankers can’t be taken seriously on bemoaning wealth/income inequality when they themselves keep perpetuating it. Easy money policies have enabled the greatest debt expansion in our lifetimes, enabled politicians to ignore all meaningful structural reforms and the resulting wealth and income inequality has greatly contributed to political movements of populism and discontentment. But none of this is acknowledged by Powell, or Draghi, or Kuroda, the central bank overlords. Or Yellen or Bernanke. Or anyone in power. None of them bear any responsibility right? Who does? Nobody of course.

But who pays for it all? Everybody, for when the next recession comes corporations will have the greatest incentive ever to automate, downsize, apply new AI technologies etc. The signs are already there, just check the banking sector. There’s always money for dividends and buybacks and CEO pay raises, now watch what we can do with downsizing.

Careful folks, 4% unemployment is not the place to be complacent about coming job gains. Watch those layoff announcements, they are a’ rising, slowly, but surely.

Markets remain entirely dependent on running to their central bank daddies for help every time they get in trouble. This is the expectation central banks have set and this is the role they continue to play. Markets are spoiled trust fund kids. The age of permanent intervention began in 2008. The correction of 2018 just made central bankers finally admit it as they failed to stay non accommodative for not even 3 months before caving.

10 years after the financial crisis we are staring at a global economic slowdown with central banks never having normalized and, as a result, having a lot less ammunition at their disposal to react. The global economy is riddled with the highest debt loads ever, while the few have become richer than ever.

Think people are angry now? Watch the next recession.

The saddest part in all this is that the financial crisis gave a loud enough warning and a call to action. We, as a global society, wasted the opportunity for meaningful structural reform, instead we doubled down on the system that was already in place. And now we’re left hoping, hoping that the Powell put will be as good as the Yellen put and the Bernanke put before that. Cause the central bank put is all that’s standing between markets and the great unwind.