This is the attitude of those opposed to it. Any real separation of the U.K. from the European Union would result in a catastrophe which knows no bounds.

They have ratcheted up Project Fear to the point now of saying there will be food shortages and permanent supply problems for fresh fruit if a hard Brexit occurs.

Things like this defy all reason. They are based on the stupidest interpretation of how humans react to changing situations. It is like saying the only potential suppliers for the U.K. of certain fruits and vegetables are those from the European Union.

Because people don’t respond to incentives and there aren’t other suppliers ready to take up the slack if the Eurocrats keep their panties in a twist over this. 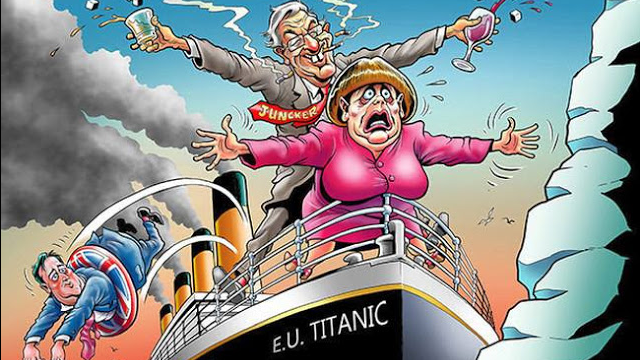 And yet, after another major session of Parliament in which Remainers were supposed to scuttle the entire process we see Brexit moving steadily towards its obvious conclusion.

The six amendments which were on the table yesterday ranged from virtue signaling about not wanting a No-Deal Brexit to parliament wresting control of the law-making process from the Government, over-turning nearly 40 years of tradition.

Four of them, all of the terrible ones, failed.

Because what finally happened is that these corrupt and venal MP’s finally ran up against the reality that they hold what power they have at the pleasure of the people they represent.

Democracy may be a flawed and dangerous form of government, but every once in a while it has its uses.

And it is most useful when the crock of shit our representatives are selling us as a plate of foie gras is so horrible we can’t hold our nose and eat it anymore.

This explains Trump. It explains Italy and it explains succinctly, yesterday’s ride on the fail boat by the Remain camp. Why? Because so many of them went home over the past week and found out exactly what the polls have been telling us for months.

The British people value honoring the Brexit referendum and their voice more than Parliament’s perception of the consequences of that decision.

So, ‘Forget the Bollacks’ as it were and get on with it.

Because of that there was no clear majority to take over the government or even to extend Article 50 (two amendments on that failed). Moreover, these votes gave Theresa “The Calcite Lady” May some clearer direction with which to go back to Brussels with.

Jeremy Corbyn tried to get what he wanted, a permanent relationship in the EU customs union, and that failed as well. So, his main opposition within Labour, Yvette Cooper, and him were roundly rejected by the body. That doesn’t bode well for Labour’s future even if this Brexit process ends ultimately with a new General Election.

And that is exactly what was on the minds of Labour MP’s who couldn’t agree on anything of substance.

It’s sad that it has come to this. The Davos Crowd’s dream of a United States of Europe not beholden to the democratic process (no matter how flawed) is failing. In the process they are willing to destroy anyone or any country saying no.

But, their power is ephemeral, if considerable in the moment. It evaporates when the people withdraw their consent far enough. Don’t believe me? Look across the channel at the Giles Jaunes in France.

I’ve seen reports that the convocation of oligarchs at Davos this year was like a morgue.They are worried about their projects failing and their nests de-feathered.

And that shows in how insane the anti-Brexit rhetoric is. And it speaks to their desperation. George Soros is now warning us about China, when just two years ago they were his best bet to assist him destroying the U.S. His MEP’s are trying to rewrite EU energy rules to wrest control of the Nordstream 2 pipeline from Europe.

These people are running out of answers. None of their usual tactics are working. I’ve been saying this for a long time, we can debunk their nonsense in real time anymore.

Even Trump’s Trio of Foreign Policy Retards — Bolton, Pompeo and Pence — had to openly admit that their little adventure in Venezuela wasn’t about humanitarianism but taking the oil.

But, again, don’t tell that to the MAGApedes, it might make them cry to realize the only thing Trump has a plan for at this point is what he’s having for lunch with his sixth Diet Coke.

And how he can MAGA by bankrupting the country with deficits he didn’t inherit, steal everyone’s oil, cave on immigration reform and shut the U.S. off from all foreign trade.

Good luck with that Orange Obama!

It is this ability to communicate in real time which has The Davos Crowd most scared. It’s why the EU will continue pushing for more control over criticism. And it’s why Project Fear over Brexit has failed.

Yesterday’s session of Parliament proved it and it’s now Theresa May’s job to turn up the heat on her opposition by pushing to March 29th without a deal in place.

At that point everyone who is anyone sees their dreams turn to nightmares. While the rest of the world just gets on with it.

Join my Patreon to help support keeping this blog ad-free, my goats fed and my opinions my own. Take it to the next level to get the Newsletter for exclusive commentary on where this is all heading.