For PG&E, just like for AIG ten years ago, this is the beginning of the end.

As we discussed on Tuesday, one of the biggest surprises involving the ongoing collapse of troubled California utility PG&E is how it was possible, that with the company reportedly contemplating a DIP loan ahead of a possible bankruptcy filing which sent PCG stock plunging and its bonds cratering to all time lows, that rating agencies still had the company rated as investment grade. 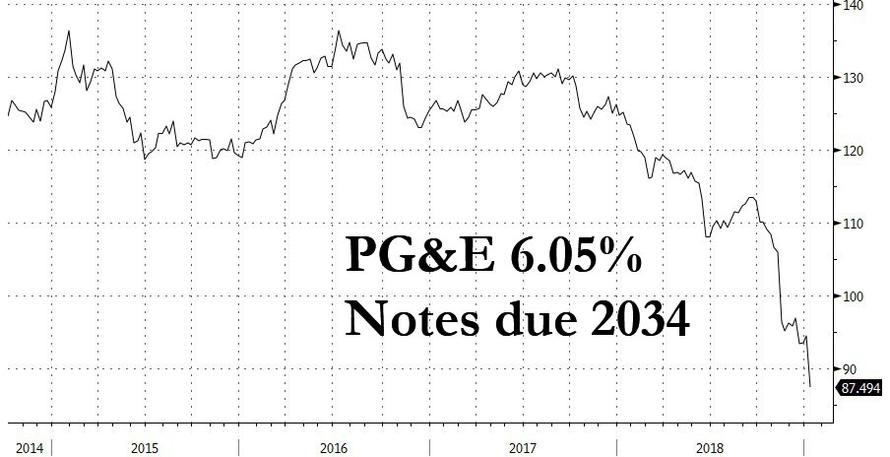 Late on Monday, this question got some closure after S&P became the first rating agency to take a machete to its rating for PG&E, when it downgraded the company by five notches, from BBB- to B, the fifth-highest junk rating while warning that more cuts are imminent. But while S&P slashed PG&E’s IG ratings, Fitch and Moody bizarrely had yet to do so, well over a month into the company’s death spiral. And when they do, both management, shareholders and bondholders would have nightmare on their hands because a similar “junking” by Moody’s to high-yield would result in a rerun of the AIG death sprial, as at least once cash collateral call for PG&E of at least $800 million – to guarantee power contracts – would be triggered according to a regulatory filing.

Well, PG&E’s AIG moment hit late on Thursday, when Moody’s did precisely what S&P did two days earlier, and cut the utility’s credit rating to junk citing the electric company’s potential wildfire liabilities. The credit grader lowered PG&E’s rating by five notches, to B2 from Baa3, and the utility Pacific Gas & Electric rating four levels to Ba3. Like S&P, the bond grader said it may (read: will) cut the company further, sending PG&E shares and bonds sliding after hours.

But it wasn’t the prospect of more downgrades that spooked the market: it was the fact that with two junk ratings, PG&E will now be required to use cash as collateral to guarantee power contracts, according to the company’s latest quarterly filing, which estimates the utility will have to fully collateralize as much as $800 million of positions.

That… is a problem because PG&E had only $430 million of cash on its books in September, precipitating what now appears to be an imminent liquidity crisis, one which as a result of some $30 billion in wildfire legal liabilities will quickly escalate into a solvency inferno, to use a term closely associated with California utility companies.

Meanwhile, assuming that PG&E somehow survives the upcoming insolvency, its junk credit ratings will assure that the company will have to pay more to borrow for years to come. In fact, the company’s 3.5% bonds due next year are currently yielding more than 9.9%, far above where most high-yield securities are paying and a level reserved for deeply distressed credits. As shown in the chart below, B-rated debt, the mid-tier of junk bonds, yields on average 7.5% as of Monday’s close, according to Bloomberg index data. 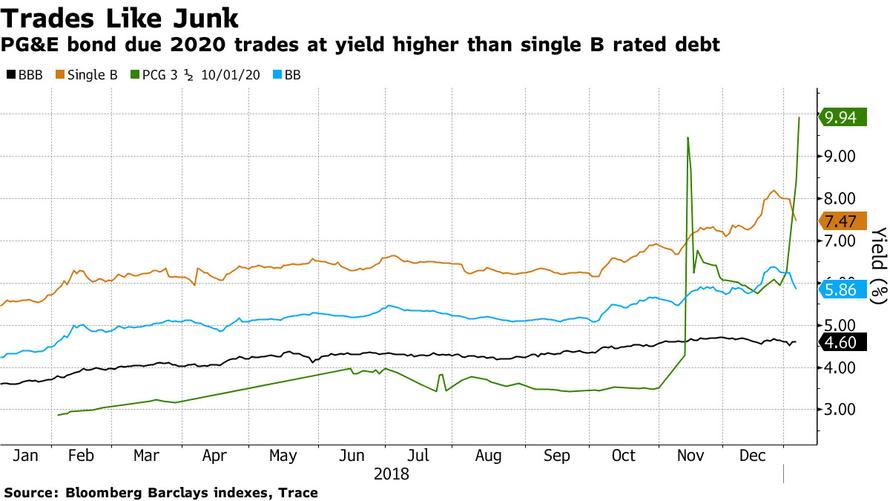 Of course, the above take assumes PG&E will survive a few quarters, which thanks to nearly $1 billion in cash collateral the company must somehow find and post immediately, it won’t.

Not even Moody’s could find a silver lining in this liquidity bonfire: “We see a much more challenging environment for PG&E,” said Moody’s analyst Jeff Cassella in the statement. “The company is increasingly reliant on extraordinary intervention by legislators and regulators, which may not occur soon enough or be of sufficient magnitude to address these adverse developments.”

Meanwhile, even as shareholders – among which bizarrely is value investing “god” Seth Klarman – hold on to hope, bondholders appear to have given up: with $18.4 billion of long-term debt, PG&E most actively-traded bonds plunged sharply after the downgrade: Pacific Gas & Electric bonds with coupons of 6.05 percent due in 2034 fell as much as 4.5 cents on the dollar to 85 cents, the lowest level since the financial crisis.

And speaking of the financial crisis, while Lehman was the spark, its was the bailout of AIG that really precipitated the most violent part of the 2008 crisis. While most analysts see PG&E as an isolated case, now that the biggest California utility is on the verge of insolvency and bankruptcy, and is about to have its own AIG moment, one wonders just how “contained” this particular shock to the system will be.

One thing is clear, however: the shock to California residents, or rather their wallets, will be most unpleasant, as their rates are about to surge one way or another.