There’s a saying that goes “mistakes are the tuition of learning”. The PG&E case in California is rife with risk management lessons where we can learn from the mistakes of others while they pick up the tab.

A big story in the financial news lately is the significant liabilities incurred by Pacific Gas and Electric or PG&E, the biggest electric company in California. The company’s core business is to generate and distribute electricity, and as a part of that business, they maintain the power lines that connect the power grid.

Government authorities have concluded that many of the fires that ravaged California over the past two years have been the result of power lines falling into trees, and California law finds PG&E liable for any costs related to fires where power lines were at fault. Matt Levine, a man so cynical and sarcastic he makes me look downright kind and forgiving,  crushes the capital structure story.  Levine brilliantly points out that there weren’t any secrets here….only a massive unfunded liability that had PG&E whistling past the graveyard for years…and certainly throughout 2018.

PG&E is, for all intents and purposes, bankrupt. How did a regulated utility get to that point so quickly? What were the warning flags? Was there a trade here?

Let’s take a look at how a macro trader might have thought about the risk in PG&E stock.

Here is the stock chart back to 2004. In early 2017, you were probably feeling pretty good. Nice run higher. No big surprises. The dividend has been increased consistently over the past two years and credit ratings has been raised. 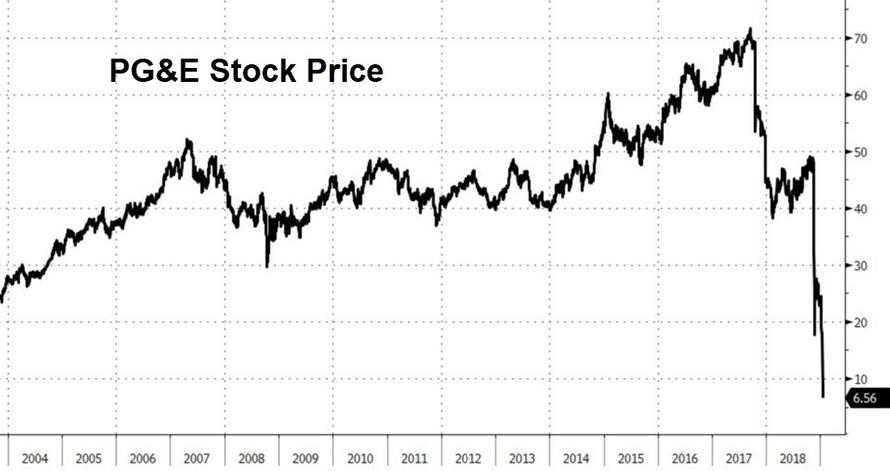 Then in early 2017 a fire in northern California burned 36,000 acres and destroyed 5600 structures, including 2800 homes and killed 22 people.  The stock fell precipitously. The 1 week fall in the stock price was somewhat similar to what happened in the financial crisis.

As a macro trader, how did you price fire risk before and after the 2017 fires?

Did you have this quote in your back pocket as the risk manager?

““California law makes utilities responsible for any fire started by their equipment, even if they weren’t negligent.”

But as Donald Rumsfeld taught us, there are “known knowns” and unknown knowns. In 2017 the game changed… PG&E fire risk was a “known known”.  Ben Hunt at Epsilon Theory might say fire risk at PG&E in 2018 was public knowledge, but not *common knowledge. The balance sheet tightened and politicians started to circle the company. While there was an effort to protect the company from further extreme liabilities by allowing them to pass costs from these liabilities onto ratepayers, the latest round of fires in 2018 that were even more severe in terms of acreage, homes and lives lost, put the company in even greater peril. Now bankruptcy is on the table.

When the November 2018 Camp Fire destroyed about 10,000 structures, about 100 people and wiped an entire town of 20,000 people off the map, PG&E was finished. But even then, it took a while before common knowledge caught up.

Yet those looking for how this risk was priced could have also used credit markets to illustrate this increasing risk…below I have a chart of PG&E’s credit risk in 5 year credit default swaps (CDS).  Note how throughout 2018 credit risk was increasing (a higher or wider CDS spread reflects an increasing risk of default), even before the Camp Fire. 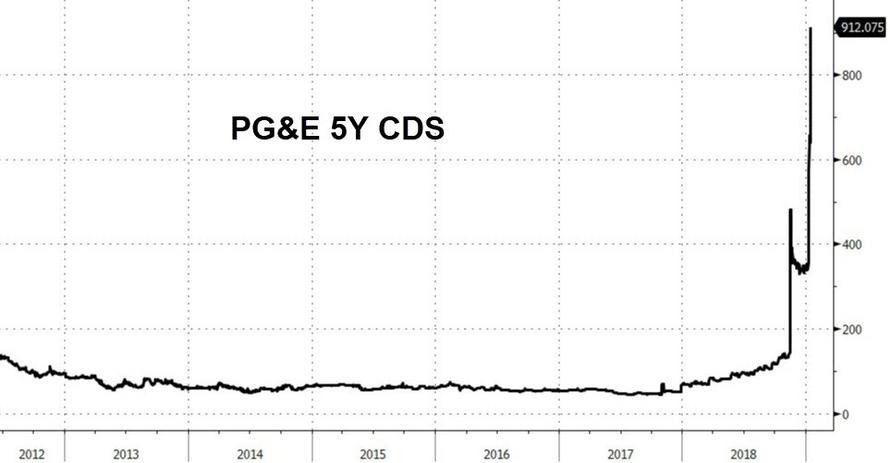 Bottom line, bond markets sniffed this out while equity markets pushed the stock 9% higher in 2018 before the fire on November 8. 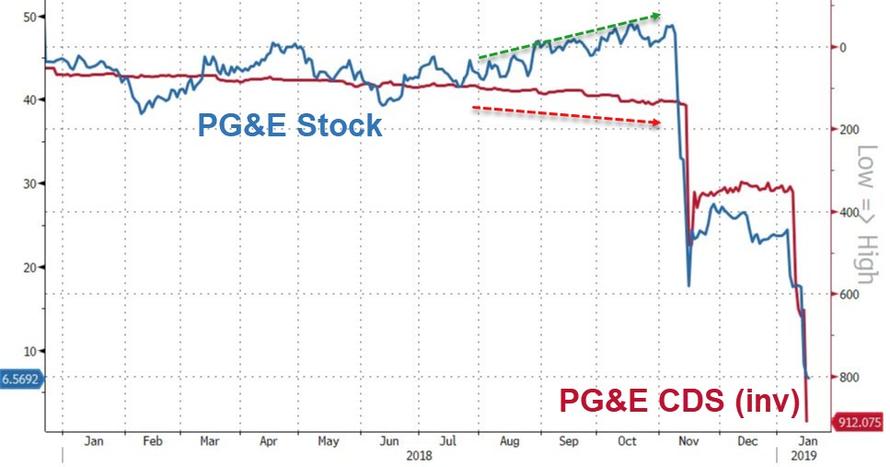 Do you think it was a coincidence that PG&E management did little to recapitalize the balance sheet for fire liabilities or commit to an extreme and fast maintenance fix when they couldn’t pass the costs on to tax payers? Which means… it would have been at the cost of the stock price, their bonuses, stock options and probably jobs?

PG&E management and stockholders clearly dramatically underestimated the costs and liabilities attached to fire risk. Some was willful, some was stupidly optimistic, and some was no doubt simply a combination of unlucky and ignorant. The fires had incredible human costs. It will also go down as a case study in capital structure, management incentives, and the value of macro analysis that identifies incentives and opportunities across asset classes.