The Porsche Taycan is widely considered to be the “mainstream” luxury automobile market’s most potent threat to the Tesla Model S. The specs for the vehicle look to be extremely impressive, not just from an EV standpoint, but from any type of “street legal” standpoint. It is said to accelerate from 0 to 62 mph in 3.5 seconds and it’ll have a top speed of over 155 mph. Its range will come in at 310 miles and it will be chargeable up to 250 miles in just over 20 minutes at a Porsche high-voltage supercharger.

Oh, and it also happens to rather impressive. 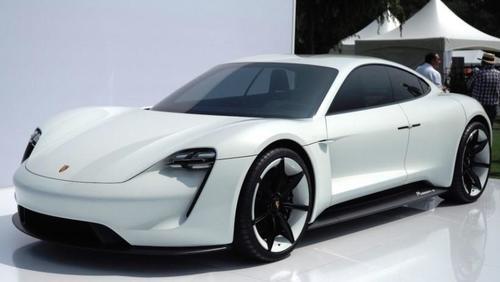 There has been an air of intrigue surrounding the Taycan since it was announced in late 2015 and it’ll finally be going on sale at the end of the year this year. As we get closer to that date, we’re also getting our first look at potential demand, which seems to be far exceeding Porsche’s expectations.

BGR is reporting that demand is so strong that Porsche is actually doubling production to meet it. The article reveals that Porsche is going to manufacture 40,000 units per year, which is twice its initial plan of 20,000 vehicles.

The article cites a report from Automobilwoche which states: “Porsche has doubled the planned quantities for its first purely electric sports car Taycan because of the foreseeable strong demand.”

Recall that just weeks ago, we wrote about how the Taycan was reportedly cannibalizing from Tesla with its initial set of reservations. More than half of the people that are signing up to pre-order the Porsche aren’t already Porsche owners. In fact, the number one brand owned by those who are pre-ordering the Porsche is Tesla.

Porsche North America President and CEO Klaus Zellmer told CNET at the time: “More than half of the people that are signing up for the Taycan have not owned or do not own a Porsche. Typically, if we look at our source of business, people coming from other brands, it’s Audi, BMW, or Mercedes. The no. 1 brand now is Tesla. That’s pretty interesting, to see that people that were curious about the Tesla for very good reasons obviously don’t stop being curious.”

We followed up that report by noting that Porsche was one of several brands to nail down a 3 minute charge (alongside BMW) a task that has still eluded Tesla. Porsche recently unveiled a charging station that can give electric vehicles enough power to drive about 62 miles on less than three minutes’ charge, putting it ahead of Tesla. The prototype charger is said to have a capacity of 450 kW, which is more than triple Tesla’s Superchargers. Vehicles that were tested at this power were brought to 80% capacity in 15 minutes. According to Tesla’s website, it needs about 30 minutes for a similar charge.

Look out Elon, the big boys appear to have officially made their way into your sandbox.