Bonds up, stocks up, yield curve up, gold up, oil up, dollar down… what else would you expect after The Fed dropped the biggest hint that the tightening cycle is over… 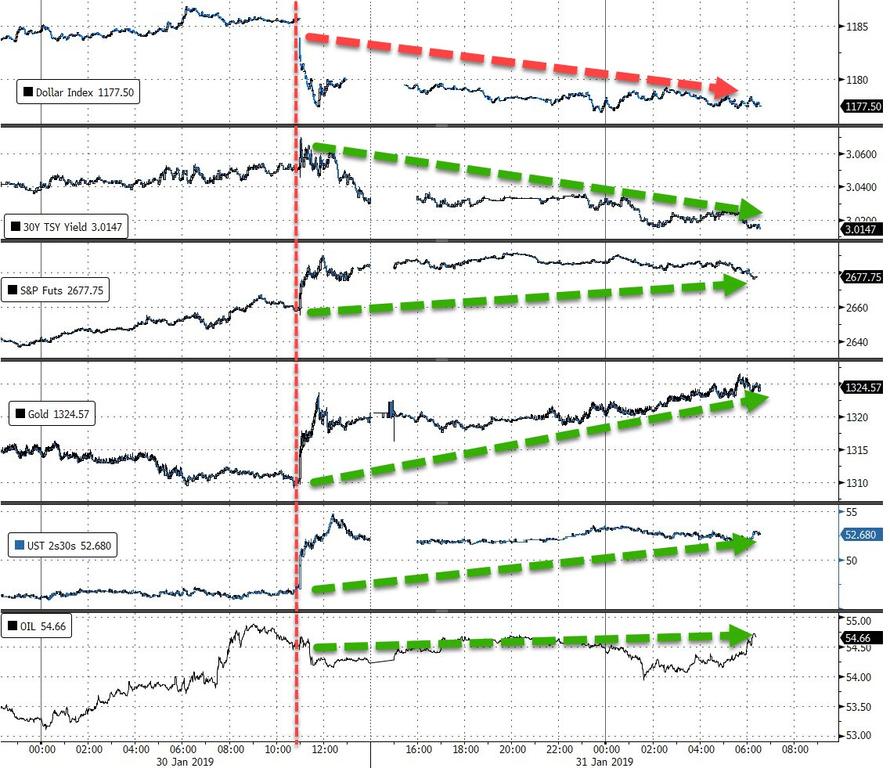 Remember, despite all the bullshit that this is a “pause”, as Raoul Pal noted:

” The Fed have never, ever “paused” a full hiking cycle. The always end up cutting. Each cutting cycle has led to a recession except mid 1990’s and 1987. Odds are in favour of the Fed having gone too far already and the stock market figuring it out in due course… “

But, as former fund manager an FX trader Richard Breslow notes, the outcome of the FOMC meeting and subsequent press conference by Chairman Jerome Powell was significant in a way additional to the obvious.

It was one of those rare instances when, if you knew what was going to happen and positioned for it in the most basic, logical and straightforward way, you would have made money. Straight across the board. It takes a bit of digging to find much of anything that didn’t react in textbook fashion. No one needed to have gotten lucky in picking their spots.

The committee itself undoubtedly liked how markets reacted. But traders need to take into consideration one caveat. It isn’t at all clear that every asset class will continue to move in lockstep. And once that happens, the story will evolve from, “They are super dovish. You know exactly what to do” to the more market troubling, “Just what do they know that we don’t?” I foresee future discussions with bereft investors about why stacked trades was no way to construct a balanced portfolio. It is clear to me that an unfortunate bi-product of this market cheering move is that the practice of hedging has been dealt a body blow. More’s the pity.

As to why the FOMC did what they did, I’m sure the persistent level of inflation not being quite at the arbitrarily selected target level had something to do with it. But less than advertised. More a convenient excuse. The stock market can take a lot of the credit. That debate should be laid to rest. It’s reality. Much has been made of the first quarter GDP jinx, but that’s measurement error being given too much weight. And if they were influenced by others, it was less from Washington officials and much more from big-name investors. I have mixed emotions about that source of suasion.

I will stipulate, however, that one thing that has clearly worsened domestically is government dysfunction. With the ongoing effects uncertain. Powell didn’t avoid mentioning this, which wasn’t entirely expected.

But, I can’t help believing that the overriding motivation was that this is a Fed taking its role as the world’s central bank very much to heart. Someone has to reassert American leadership. And lend a helping hand. Look around the world and try to identify where the engines of growth are. The global economy just doesn’t have the momentum of the recent past.

Those who are now even more resolute in their weak-dollar forecasts should remember that there will be a lot of foreign investors who would love to feast on U.S. assets on an unhedged basis if they thought the dollar had fallen to levels that make doing so a good bet. And wasn’t it an interesting coincidence that just after USD/JPY slid back below 109, the BOJ’s Deputy Governor Masayoshi Amamiya took the opportunity of a press conference to talk about additional easing tools they could deploy if needed and that short-term currency moves happen.

This morning, Europe was even less nuanced. They published a euro-zone fourth-quarter GDP number of 0.2% and, with their GDP miss, the Italian government confirmed they are in a technical recession. Nevertheless, there is no shortage of people who think the euro is a screaming buy on the new Fed stance.

I’m not going to dwell on China other than to say the yuan should be watched closely as a dollar barometer as it has now risen versus the dollar to just below resistance. Let’s see how the trade talks go.

It will be important in handicapping when and if the Fed will hike again to be cognizant of just what data they are dependent upon.