Some progressives back piling on even more debt to pay for social programs. That could be risky… 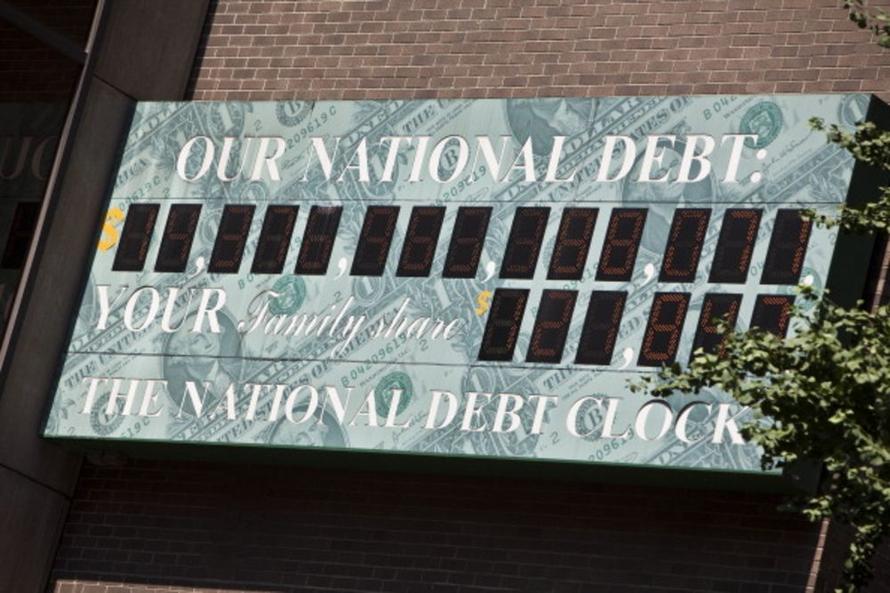 Discussions of big government spending programs often revolve around the question of how to pay for them. For example, Representative Alexandria Ocasio-Cortez touted her proposal for a 70 percent tax rate on income above $10 million by saying it would help pay for the Green New Deal, a broad package of environmental and economic initiatives.

Implicit in this concern is the idea is that government debt shouldn’t get too big. This is a common belief — polls regularly find that Americans are worried about the national debt. The national debt clock in Manhattan is a famous symbol of this anxiety. The idea is also formalized in mainstream economic models, which tend to assume that in the long run the government has to balance its books. Writing at Brookings Institution, David Wessel expresses this conventional wisdom when he declares that “federal debt cannot grow faster than the economy forever.”

But what if this is a fallacy? What if the government doesn’t have to pay back what it borrows, now or ever? This is the provocative thesis of an unorthodox economic theory that is rapidly gaining credence on the political left called modern monetary theory, or MMT. The concept isn’t new — economist Abba Lerner endorsed something similar in the 1940s, under the name of “functional finance.” But the theory has enjoyed a popular resurgence since it was embraced by some progressives, who want to enact a federal job guarantee and other ambitious economic plans paid for by government borrowing.

MMT has many elements, and its advocates tend to express these in terms that aren’t familiar to many mainstream economists. But the central argument that the U.S. government doesn’t really have a budget constraint — and thus, that taxes are never needed to pay for federal spending — is simple enough to grasp. Basically, it’s because the government can print dollars whenever it wants.

Suppose the government decides to pile up infinite amounts of debt. What bad thing could happen? Debt-service costs increase. But instead of raising taxes to pay the interest, the government could simply borrow more in order to cover those interest payments. The Federal Reserve could also lower interest rates to zero, thus eliminating interest costs. This is basically what has happened in Japan.

What if rising U.S. government debt also causes investors to pull back on lending to U.S. companies? No problem; by lowering interest rates, the Fed can ensure that the cost of capital doesn’t get too high. In a pinch, it could even buy corporate and mortgage debt. Fed lending to any company that wants it might reduce business productivity, since the central bank is presumably worse at evaluating risks than private investors are. But the MMT people aren’t too worried about that — after all, a federal job guarantee, which could also potentially muscle out private-sector activity, is a prominent centerpiece of their plans.

Of course, the Fed is a nominally independent institution, but there’s no reason this arrangement has to continue. Under an MMT regime, central bank independence could be eliminated, and monetary policy could be coordinated between the Fed and the Treasury.

That leaves just one danger — that funding for federal debt will dry up, leaving the U.S. government with no one to finance its infinite borrowing. No one, that is, except itself. Again, the Fed funds the Treasury’s borrowing by simply printing money, which actually just means creating reserves in an electronic bank account. In this case, the Treasury itself becomes little more than a formality — a conduit for the Fed to pay government workers, contractors and transfer-payment recipients.

So this is the MMT endgame; government pays for as much as it wants with the endless supply of money that it creates. In this sense, the MMT people are right that there is no government budget constraint. But there is a different kind of constraint that no financing arrangement can get around — the limitation of real resources. Eventually, if the government keeps paying for more things, we run out of them, whether it’s unemployed workers to fill offices and factories, natural resources, or production capacity.

What happens if the government keeps trying to pay for things with printed money after the economy has employed every available worker? No one really knows. One common theory is that hyperinflation would result. This is a disastrous spiral in which prices rise so quickly, and so unpredictably, that a country’s entire economy grinds to a halt and the nation collapses into poverty. For a look at how hyperinflation can immiserate a nation, simply examine the stories coming out of Venezuela.

Could too much printed money chasing a limited supply of real goods lead to hyperinflation in an advanced economy like the U.S.? Proponents of MMT certainly acknowledge the possibility that it could. In September, when I discussed the idea with Stony Brook University economist and Bloomberg Opinion contributor Stephanie Kelton, a leading MMT champion, she said:

Is there a limit to how big the deficit can safely climb? Absolutely! Deficits matter. They can be too big — risking accelerating inflation.

Some of MMT’s more strenuous online advocates wave away the possibility of hyperinflation in a country as politically stable and economically developed as the U.S. And indeed, low interest rates and large levels of quantitative easing haven’t led to much inflation, either in the U.S., Japan or Europe, as inflation hawks had warned it would:

But just because inflation remains subdued doesn’t mean it couldn’t rise suddenly, especially if businesses — which set prices — decide that the U.S. government has embarked on a course of infinite monetary-financed deficit spending. In fact, inflation might have remained so low, in despite of Fed easing, precisely because businesses believed that Fed independence and the Treasury’s fiscal prudence meant that quantitative easing and big deficits would eventually end.

A wholehearted embrace of MMT would thus represent a gamble of the U.S.’s economic future on the idea that hyperinflation can’t happen here. Recent experience has made such a disaster seem unlikely, but the truth is that no one really knows how likely it would be if MMT went from theory to reality.