The other day I published an article saying we can expect to see more and more smear campaigns painting progressives as Kremlin agents and useful idiots of Putin as the 2020 election draws closer. 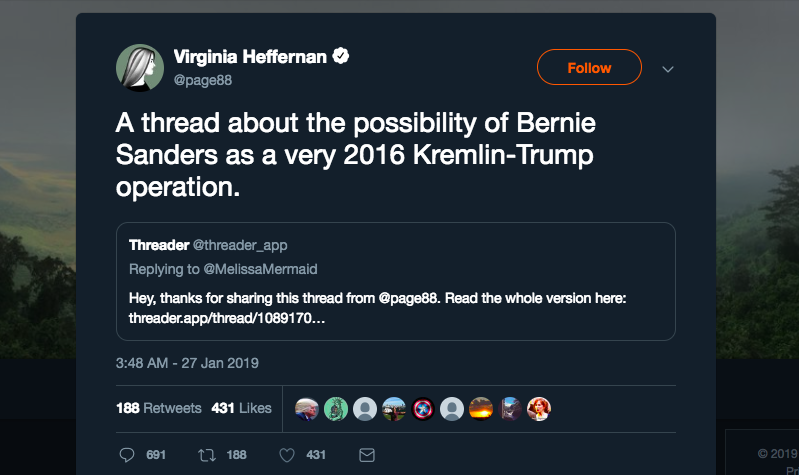 Since the publication of that piece two things have happened: a report that Bernie Sanders is about to announce his 2020 presidential candidacy, and a sharp spike in centrist Democrats smearing him as a Kremlin agent.

Take a gander at the following tweets for some examples:

The number of replies to this tweet from liberals suggesting Bernie has some sort of secret ties to, or soft spot for, Putin is deeply depressing. And silly. But mainly depressing. https://t.co/Cks5tIriet

A very mainstream writer, @page88 – now at @wired, @Slate & @latimesopinion – explicitly suggests Bernie 2016 was a Kremlin operation & ponders if he was “wittingly” helping Putin. This is Alex-Jones-level conspiracy derangement but these are the conspiracies the mainstream likes pic.twitter.com/JGmSWn11ZH

Here’s where we can start: Why doesn’t Bernie ever vote against Russia? Let’s explore Tad Devine’s connection with Manafort. Who helped Bernie hack into Hillary’s data before the Iowa caucuses? Why did Bernie spend his honeymoon in Russia? https://t.co/y853IizKzq

A thread about the possibility of Bernie Sanders as a very 2016 Kremlin-Trump operation. https://t.co/d4xFUVsAOu

3/ First off, Russia did not just put all their roulette chips on Trump. His was just the number that came up.

There were chips on Jill Stein. On Bernie Sanders. On Rand Paul:https://t.co/EbK3ZzKMDM

And so on. (Right now, looks like bets are being placed on Tulsi Gabbard).

-Paid Manafort’s business partner millions of dollars through a shady LLC
-Blamed Hillary for ‘allowing’ Russia’s attack on our election
-Had a campaign staffer who went to work in Russia for Putin’s goddaughter
-Wife was the subject of ~18 month FBI investigation https://t.co/Ls82nktcvK

I’m flagging this spike not just because it’s an obnoxious trend we can expect to see used to as a murder weapon against any attempt to shift America’s corrupt political system even a single inch to the left, but also to point out the fact that American progressives have helped create this dynamic.

Russiagate is pure narrative. Russia’s alleged interference in America’s elections and Trump’s alleged collusion with that interference have been treated with the same kind of intense, blanket news coverage and hawkish patriotic punditry that we saw in the wake of the September 11 attacks, except unlike 9/11 there are no dead bodies, no fallen buildings, nor indeed any actual, tangible sign that anything real happened at all. It’s an entire media class shrieking endlessly about a story that has no hard center that people can look at and see for themselves. It’s a crisis that is made entirely out of a narrative about a crisis.

Since it has no basis in facts or reality, the only way to keep alive a crisis that is made of pure narrative is to keep feeding it with more narrative. Anyone who has helped do that is partly responsible for the frenzied, hysterical environment we now see before us in which a Bernie Sanders campaign which hasn’t even begun yet is already being undermined by completely baseless allegations of Kremlin collusion.

Much of this frantic Russia hysteria has been created by the center, and also increasingly by Trump’s branch of the right wing as it strives to prove itself “tougher on Russia” than anyone else. But a lot of it has come from a leftish direction as well. Not so much from the proper leftists, the Marxists and the Greens (though their fervent opposition to right-wing governments does sometimes set them at odds with Russia in a way that can see them advancing similar narratives to the centrists), but from the more mainstream progressives who back Bernie Sanders but supported Hillary Clinton in the general election.

What hold does Russia have over President Trump? pic.twitter.com/Qk0mvxAMIk

The most high-profile of these progressives, ironically, is Sanders himself. Sanders has been shamelessly endorsing the establishment Russia narrative and feeding into the fact-free collusion conspiracy theory for two years now, using his large social media platforms and in his appearances on the mainstream media as well. His many, many promotions of Russiagate have been instrumental in seeding the idea on the left, which is partly why I now routinely have Sanders supporters arguing with me on social media in favor of the CIA/CNN Russia narrative.

This doesn’t mean that Sanders “deserves” the Russia smears that are now being heaped upon him or whatever, but it does mean that he helped build an environment in which mainstream media reporters like Virginia Heffernancan publicly level deranged, hysterical accusations of Kremlin servitude at him without it getting tossed out of the office as a crackpot conspiracy theorist.

Progressives helped create this environment, and this needs to be acknowledged and corrected by the American political left, because it will only be used against them.

ps — “or is it something else?”: what are you implying here? pic.twitter.com/RnsCYhwUiV

Another prominent voice which has been instrumental in marketing Russia hysteria to progressives and creating this toxic McCarthyite environment has been Cenk Uygur and his popular outlet The Young Turks. TYT has over four million subscribers on YouTube alone and exerts a tremendous amount of influence over the thinking of Americans who identify as progressive. The outlet isn’t all bad, and Uygur himself sometimes puts forward some very useful insights on the reality of oligarchy in America and mass media corruption, but they’ve also been aggressively foisting the establishment Russia narrative onto the political left for a long time, not just promulgating belief in it but harshly criticizing leftists who don’t.

In May of 2017, for example, TYT aired a segment titled “Yes, The Russia Scandal Is Actually A Scandal” in which Uygur excoriated people on the left for refusing to subscribe to the CIA/CNN version of events without seeing hard evidence for them first. Not afraid to name names, he called out vocal Russiagate skeptic Michael Tracey, who was at the time a TYT reporter, mocking Tracey with his hands over his eyes yelling “I don’t see it! I don’t see it!” Tracey has since left TYT.

There are many appalling examples of Cenk’s deranged facilitation of the longstanding agendas of the US intelligence community to subvert and isolate Russia, like when he and his TYT panel attacked Trump for holding an insufficiently aggressive nuclear posture toward Russia, suggesting that it was because the president is “in the pocket of another country.” Or the time he leveled an astonishingly sleazy McCarthyite insinuation at another Russiagate skeptic, Aaron Maté‏, suggesting that his refusal to accept opaque US government assertions on faith may have been due to some fealty to the Kremlin.

Uygur has been consistently wrong about Russiagate, predicting in March of 2017 that Trump would be out of office within six months as a result of the imaginary scandal, and recently posting an embarrassing fit of joy about the “bombshell” BuzzFeed report on the Robert Mueller investigation titled “Trump’s Done. Here is the Evidence.”, which was refuted hours later by Mueller himself.

These are the minds who have helped bog down America’s progressive movement with stupid, self-defeating hawkish and McCarthyite narratives which suck all the oxygen out of the room for the advancement of progressive issues, and which are now being used with increasing frequency to attack not Trump and the right, but Bernie Sanders and the left. The consequences of their idiotic behavior will go increasingly mainstream in the long, long lead-up to the 2020 election, and it will do incalculable damage to progressive agendas, unless it is thoroughly excised from the movement and flushed down the toilet where it belongs.