“While we don’t presently observe conditions to look for a ‘buying opportunity’ or a ‘bottom’ from a full-cycle standpoint, we do observe conditions that are permissive of a scorching market rebound, even if it only turns out to be the ‘fast, furious, prone to failure’ variety. We wouldn’t dream of removing our safety nets against a market decline that I continue to expect to draw the S&P 500 toward the 1000 level by the completion of this cycle. Still, we’ve prepared for the possibility of unusual volatility here, most likely including one or more daily moves in the range of 4-6%, potentially to the upside. Yes, that means one or more daily moves on the order of 100-150 points on the S&P 500 and 900-1300 points on the Dow. You think I’m kidding.”

In recent days, we’ve heard a number of analysts gushing that the S&P 500 is vastly cheaper than it was only a few months ago. It’s worth noting that they’re actually referring to an index that is now less than 10% below the steepest speculative extreme in history. The chart below puts current valuations into perspective, using our Margin-Adjusted P/E, which is better correlated with actual subsequent 10-12 year market returns than the price/forward operating earnings ratio, the Shiller CAPE, the Fed Model, and a wide range of alternative valuation measures that Wall Street uses to reassure investors that valuations are anything less than obscene. 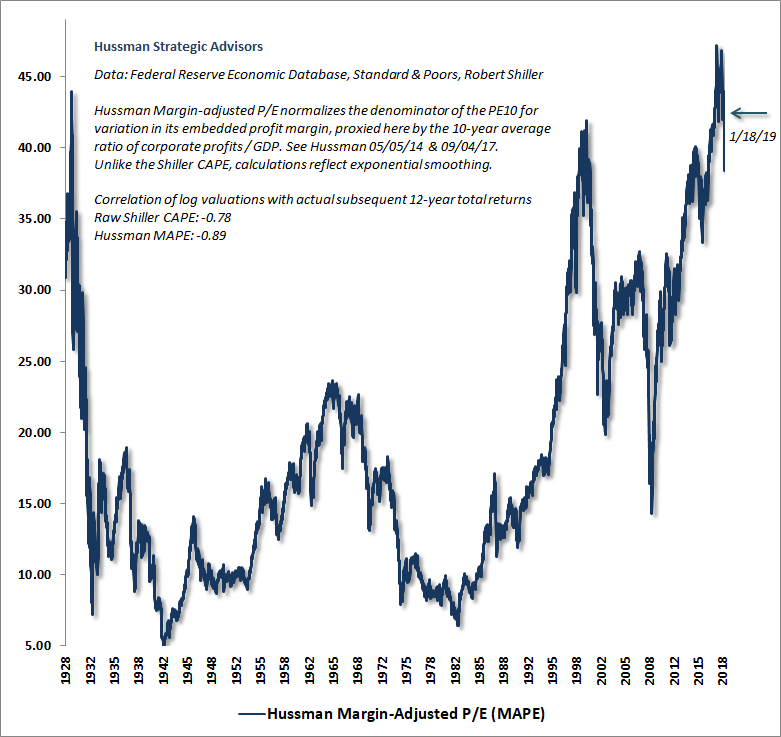 As market conditions currently stand, valuations remain extreme and market internals remain negative. So aside from the likelihood of a knee-jerk market spike on any variant of the word “deal,” we continue to be in a trap-door situation with respect to market risk. Though we did take the edge off of our negative outlook to allow for a scorching relief rally, my present view is that the overall function of that relief rally has been served.

One of the more cringe-worthy features of the behavior of investment professionals here is the spectacle of Wall Street analysts touting the “reasonableness” of valuations on the basis of year-ahead earnings expectations that they themselves are responsible for fabricating. Just as in 2000 and 2007, instead of the investment profession acting as a historically-informed buffer to defend investors against reckless speculation, extrapolative projections like these are actually endorsed and encouraged by the very people who should know better. The chart below is thanks to TopDownCharts. 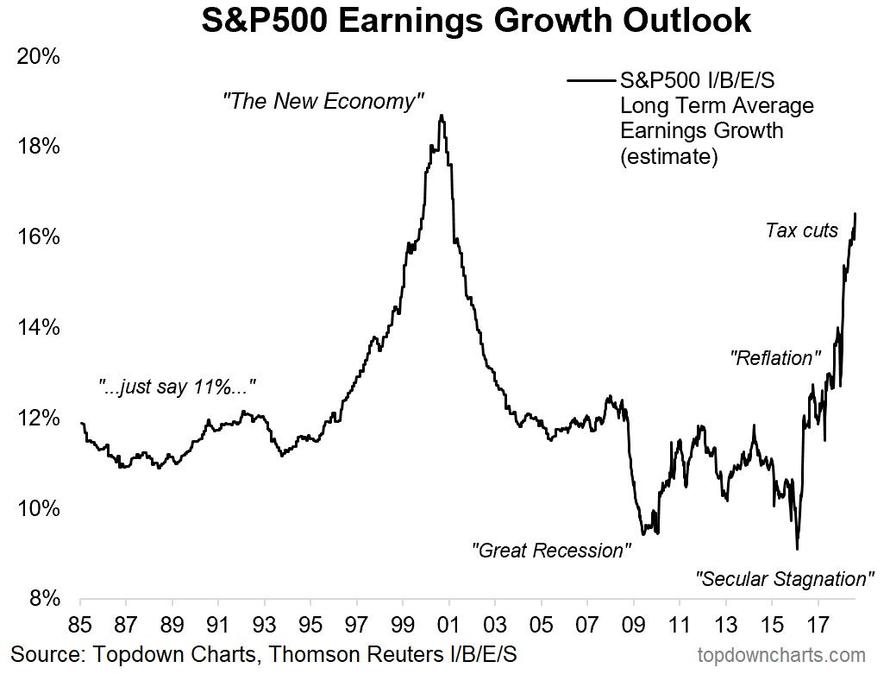 …though we’re inclined to wait for more data, and to look for greater deterioration before identifying a recession, it’s important to remember how quickly the data can shift. The amount of time between the peak in economic confidence and the beginning of a recession is usually very short. In general, a uniform deterioration in financial, employment and economic confidence measures, even compared with 6 months earlier, strongly amplifies the risk of a recession, and there’s not much lead time at all. Put simply, we want to have a reliable set of confirming evidence, but it’s also important to remember how quickly that evidence can emerge. 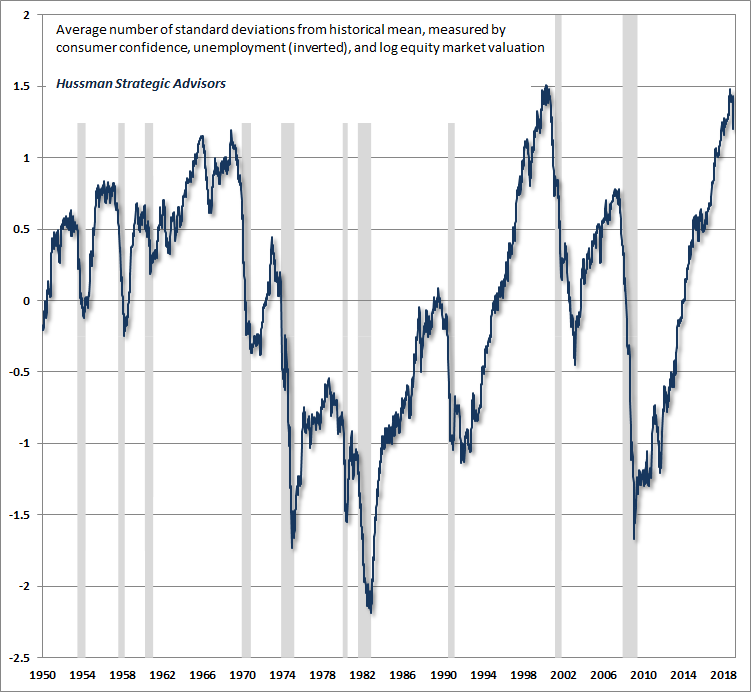 Questions we hear a lot

Given the volatility of the financial markets in recent months, my sense is that the best comments to offer are those that relate to these questions:

My impression is that the recent bull market peaked on September 20, 2018, which is also when we observed the largest preponderance of historically useful top signals we’ve ever seen. As I noted at the time, the only other point that came close was March 24, 2000, the date of the 2000 bubble peak. Still, the primary usefulness of a bull/bear label is to emphasize the potential for steep market losses over the completion of the cycle. As long as one recognizes that risk, there’s no need for labels.

It’s probably better to recognize that the market remains hypervalued and that market internals remain unfavorable. If internals improve at high valuations, our outlook is likely to shift to something that might be described as “constructive with a safety net.” If they improve at substantially lower valuations, we’re likely to move to an unhedged or aggressive stance. For now, there’s so much downside risk that we’d view an improvement in internals as a “bear market rally,” but whatever one might call it, we’d likely be constructive with a safety net. Even that, I suspect, is likely to emerge from lower levels.

My impression is that neither provides much prospect for meaningful returns, and 10% off the most obscene valuations in U.S. history isn’t what I’d call a “bargain.” With the yield curve as flat as we currently observe, the main reason to own bonds is based on the likelihood of a decline in yields in the event of economic weakness. There’s some potential for that, but I’d lean toward a mix of Treasury bills, modest bond market durations, high credit-quality, and hedged equity. Our estimated return/risk profile for precious metals shares is also fairly strong here, but given the volatility of those shares, I’d characterize that as a constructive situation rather than an aggressive one. None of these is without risk.

We’re seeing a good deal of weakness in our leading measures, and a lot of the regional purchasing managers indices and Fed surveys are deteriorating as well, but we don’t have a sufficient basis for an outright recession warning. This expansion is very long in the tooth, unemployment is quite low, and the underlying structural growth factors are dismal. So my sense is we’re far closer to a recession than to 4% real GDP growth “as far as the eye can see.” Given the other factors already in place, be particularly watchful for an ISM Purchasing Managers Index below 50, a move above 4% in unemployment, and a slowdown in employment growth below about 1.4% year-over-year. A decline in aggregate hours worked versus 3-months earlier along with a steep drop in consumer confidence, particularly about 20 points below its 12-month average, would all be strong confirming evidence of an economic downturn.

More rate hikes or a new round of QE?

On December 19, Fed Chair Jerome Powell observed “We’ve reached the bottom end of the range of what the Committee believes might be neutral.” I think that is exactly right. As I observed in the December comment, the combination of low structural economic growth and modest inflation pressure is fairly consistent with the current level of short-term interest rates. Long-term rates would normally be higher in the context of current data, but given the deterioration in leading economic measures (remember, payroll employment and the unemployment rate are two of the most lagging economic measures available), there’s little compelling upward pressure.

Don’t take hope in Fed intervention to support the market, other than knee-jerk reactions. First, remember that the Fed eased persistently throughout the 2000-2002 and 2007-2009 collapses with no effect. When investors are inclined toward risk-aversion, safe liquidity is a desirable asset, not an inferior one. My view is that it’s essential to monitor market internals directly. We don’t disclose the details of our own measures, but I’ve discussed uniformity, divergence, breadth, leadership, price-volume sponsorship, credit spreads, and other factors often enough that the central concept should be clear: when investors are inclined toward speculation, they tend to be indiscriminate about it.

If and when internals improve, virtually anything the Fed does will likely be associated with market gains. If internals continue to indicate risk-aversion among investors, then those knee-jerk “clearing rallies” would best be used as opportunities to sell marginal stock holdings and tighten up hedges.

My impression is that Jerome Powell is highly aware of how loose the cause-and-effect links are between monetary policy and the real economy. But apart from noting that the Fed’s workhorse economic model estimates only a 0.2% change in the unemployment rate after 3 years in response to each $500 billion in asset purchases, there’s nothing in his past speeches that indicates an intellectual opposition to QE. It’s not at all clear that the Fed recognizes its role in creating repeated cycles of bubble and collapse. So we have to allow for another round of QE in response to the next recession. Again, the appropriate response on our part will be to align ourselves with market internals. A favorable shift would likely encourage a constructive or aggressive investment outlook, particularly if valuations have retreated substantially at that point.

One of the key features of the recent speculative episode has been yield-seeking speculation by investors starved for safe yields. In response, Wall Street and corporate America provided more “product” in the form of low-grade covenant-lite debt. Indeed, the median rating on U.S. corporate debt now stands just one notch above junk. In an economic decline, one should expect a disruptive wave of defaults, with far lower recovery rates than in previous economic cycles.

Now, defaults tend to be deflationary, so what you tend to see is an upward spike in the yields on junk bonds and corporate debt but a downward trend in the yields of securities viewed as being without credit risk, which has historically included Treasury securities. The question is what happens when we begin to run trillion dollar deficits.

In the event of a deflationary economic decline, even one where defaults are higher as a result of all the yield-seeking and low-grade debt issuance of recent years, another round of QE seems likely. Our response to that prospect is simple – we’ll take our cue from market internals, particularly given that the entire net total return of the S&P 500 since 2007 occurred when our measures of internals have been favorable, and most of the 2007-2009 collapse occurred when they were not. As I’ve regularly noted, our problem during the recent half-cycle had nothing to do with valuations or market internals, but with our bearish response to “overvalued, overbought, overbullish” syndromes.

Meanwhile, it’s also important to allow for an inflationary economic decline, which would result from a public loss of faith in the ability of the government to run a stable debt/GDP relationship. In that event, all bets on QE are off, and the country will just face a difficult situation, as it has periodically faced before.

The best indicator of inflation is inflation. It’s difficult to forecast inflation with macroeconomic variables, because large shifts in inflation are typically linked to discrete events that provoke a loss of confidence in price stability itself, like the trifecta of Great Society deficits, Nixon closing the gold window, and an oil embargo, or the combination of money printing and a supply shock, like using deficit finance to pay striking workers in the Ruhr. Not surprisingly, we’ll infer that shift in confidence from uniformity in the behavior of inflation-sensitive asset prices.

I know that many observers are quietly repeating Milton Friedman’s phrase that “inflation is always and everywhere a monetary phenomenon.” The problem is, you won’t reliably see that in the data. As a former economics professor, I get it. The quiet job of the economics profession is to indoctrinate teenagers with purely theoretical models by showing them line-drawings. Nobody ever asks them to spend time staring at actual numbers.

So they become adults – and sometimes even Fed governors – who take theoretical diagrams as reality, for example, the notion that the Phillips curve is a relationship between unemployment and general price inflation, when there’s utterly no evidence for it. In fact, as I’ve regularly argued, when you actually look at A.W. Phillips’ data (a century of British unemployment and wage data during a period of stable general prices under the gold standard), the Phillips Curve is actually a relationship between unemployment and real wage inflation.

Of course, money creation and general price inflation are undoubtedly linked when money creation hits the pace of the Weimar Republic or Zimbabwe. But for the U.S., there’s no economic factor that predicts the rate of inflation better than the rate of inflation itself (and related uniformity in the behavior of inflation-sensitive securities including precious metals, exchange rates, bond prices, commodities, TIPS, and related securities). Just like a shift in market internals, it may be difficult to predict, but it’s fairly easy to align yourself with it.