One week ago, when we discussed why the Fed now finds itself trapped by the slowing economy on one hand, and the market’s response to the Fed’s reaction to the slowing economy (namely the market’s subsequent sharp rebound, only the third time since 1938 that we’ve seen a V-shape recovery of this magnitude when the market dropped down more than ~10% and spiked +10% in the subsequent period), we said that the “obvious problem” is that the Fed is cutting because the economy is indeed entering a recession, even as market have already rebounded by over 10% from the recent “bear market” low factoring in a the economic response to an easier Fed, effectively cutting the drop in half expecting the Fed to react precisely to this drop, while ignoring the potential underlying economic reality (the one confirmed by the bizarrely low neutral rate, suggesting that the US economy is far weaker than most expect).

Ultimately, what this all boils down to as Bank of America explained yesterday, is whether the economy is entering a recession, or – somewhat reflexively – whether the suddenly dovish Fed, trapped by the market, has started a chain of events that inevitably ends with a recession. The historical record is ambivalent: as Bloomberg notes, similar to 1998 and 1987, the S&P fell into a bear market last month (from which it immediately rebounded) following a Fed rate hike. The difference is that in the previous two periods, the Fed cut rates in response to market crises – the collapse of Long-Term Capital Management in 1998 and the Black Monday stock crash in 1987 – without the economy slipping into a recession. In comparison, the meltdown in December occurred without a similar market event.

And yet, a meltdown did occur, and it has a lot to do with confusing messaging by the Fed, which did a 180-degree U-Turn when in the span of just two weeks, the Fed chair went from unexpectedly hawkish during the December FOMC press conference (which unleashed fire and brimstone in the market), to blissfully dovish when he conceded at the start of January that the Fed will be “patient” and the balance sheet unwind is not on “autopilot.”

But it wasn’t just the Fed’s messaging in a vacuum that prompted the sharp December drop: it is also the fact that the Fed and the market continue to co-exist in a world of perilous reflexivity, a point made – in his typical post-modernist, James Joyceian, Jacque Lacanian fashion – by Deutsche Bank’s credit strategist Aleksandar Kocic, who writes that “the underlying ambiguities of the market’s interpretation of economic conditions are an example of financial parallax – the apparent disorientation due to  displacement caused by the change in point of view that provides a new line of sight” (or, said much more simply, the Market reacts to the Fed, and the Fed reacts to the market in circular, co-dependant fashion).

Yet while there is nothing new in the reflexive nature of the coexistence between the Fed and market, this process appeared to short-circuit in Q4. So “where is the problem and what are the sources of misunderstanding” asks Kocic, and answer by taking “the timeline from November of last year as the onset of the subverted perspective and the beginning of the self-referential circularity” (as we have said before, Kocic takes a certain delight in using just a few extra words than is necessary for the attention spans of most traders, even if liberal majors find a particular delight in his narrative). Anyway, continuing the Kocic narrative of where the reflexivity between the Fed and market broke down, in the chart below the Deutsche Bank strategist shows two snapshots of the swaps curve from November and January. 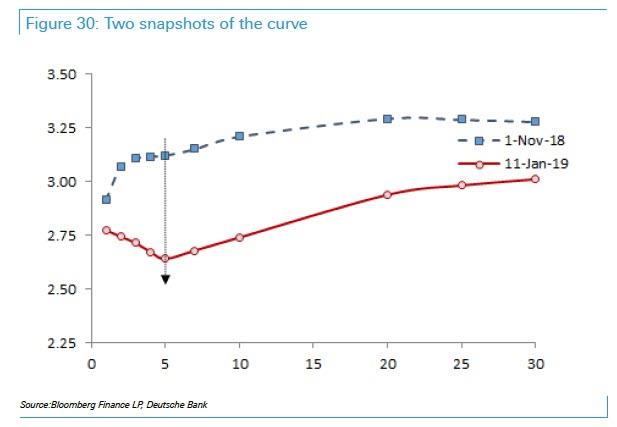 As we noted repeatedly over the past 4 weeks, while the long end has largely experienced a parallel shift lower, Kocic correctly points out that “the biggest drama has occurred in the belly of the curve which has inverted through the five-year horizon”, yet where Kocic’s view differs is that according to him, this is not indicative of a risk off trade but is instead “a radical repricing of the Fed.” Meanwhile, according to the DB strategist, the inversion of the front end is the main source of the reinforcing loop “as it brings in the uncomfortable mode of what we think is a misidentified alarm and incorrect interpretation of its economic significance.”

To make his point, Kocic looks at the previous episodes of curve flattening during the past two tightening cycles. 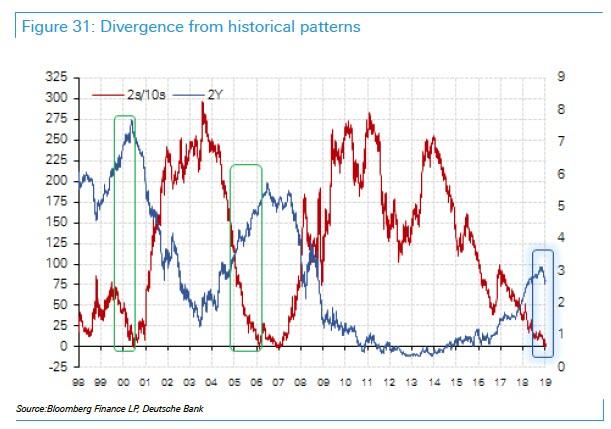 As DB notes, unlike the past two episodes of Fed tightening, when rate hikes were responsible for bear inversions, the last three months represent a bull inversion. In other words, “the recent flattening and inversion of some sectors of the curve has been driven by a decline in long rates that outpaced the decline in short rates.”

As others have observed, this departure from history highlights a potential flaw in the logic behind the connection between inversion and recession, Kocic writes, and explains:

If excessive Fed tightening is the likely trigger of the next recession, then the underlying logic and causality must go as follows. The Fed continues to hike until it becomes restrictive and the economy begins to contract which eventually forces the Fed to reverse its direction. The former causes curve inversion and a tightening of financial conditions through a decline in the stock market and wider credit spreads together with an economic slowdown. The Fed then begins to cut rates in order to counter the effect of excessive tightening and the curve re-steepens.

Simple enough, and also extremely problematic, because as we explained last weekend, it’s not the Fed tightening that is the recession catalyst: it is when the Fed begins cutting rates that one should be worried as all three prior recessions followed within 3 months of the first rate cut after a hiking cycle:

… while many analysts will caution that it is the Fed’s rate hikes that ultimately catalyze the next recession and the every Fed tightening ends with a financial “event”, the truth is that there is one step missing from this analysis, and it may come as a surprise to many that the last three recessions all took place with 3 months of the first rate cut after a hiking cycle! 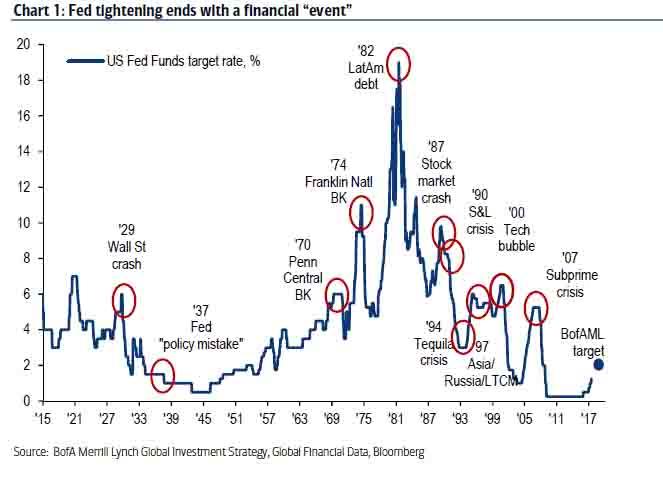 If that wasn’t bad enough, Kocic notes that if “this were how things work, the recent market dynamics would be consistent with the US economy already being in a recession” and explains that “with rates already rallying, the implication is that the Fed deliberately and mistakenly continued to hike. This is the territory of a serious policy mistake.”

In other words, bull inversion and rate hikes would indicate that the Fed was totally detached from the realities of the market.

Yet after laying out this scenario, one which the market was obsessed with for much of December, Kocic counters that a closer look at the recent repricing “suggests that this narrative of a policy mistake may be misleading and market dynamics reveal something very different from a recessionary market mode” and further claims that what happened fits with the Fed sticking to the script of market normalization as a priority to wit:

this interpretation runs contrary to the recent response from the Fed, in which they have shown an unmistakable attention to detail with a thorough understanding of the complexity of the situation with all the risks associated with the stimulus unwind. The Fed has also gone to great lengths throughout this normalization process to prepare the markets for its exit and take care not to generate additional problems along the way. The well-telegraphed unwind of the balance sheet, which has come under increasing scrutiny over the past month is just one example of the Fed understanding the potential pitfalls of providing too little guidance.

Kocic then goes on to further claim that the market reaction is “a clear demonstration that the Fed is on track with the normalization of the rates market”, and thatr “by sticking to its script, the Fed has forced another leg of normalization. The two aspects of this are shown both in the decline of the correlations back into negative territory as well as the migration of volatility to the front end of the curve, both corresponding to the pre-2008 curve functioning.”

Why does Kocic take such a contrarian view, at least relative to the broader market? Because, as he explains, “if bear steepeners and bull flatteners were to continue to be the dominant curve modes, monetary policy shocks are at risk of being amplified, and the potential for a disruptive unanchoring of the back end of the curve, with its hazardous ramifications for risk assets and credit in particular, is heightened.”

This is why normalization requires front-loading monetary policy shocks and focusing on the front end with the fed funds rate remaining the primary policy tool, while – despite some calls to the contrary – the balance sheet unwind should remain predictable and controlled.

Whether Kocic is correct or not we will know shortly, perhaps as soon as March, when the Fed – which as we discussed previously remains a hostage to markets – will be pressed to halt its balance sheet reduction, and which would immediately crush Kocic’s theory that the Fed is purposefully normalizing instead of simply being forced to react to the market’s every whim.

In any case – accuracy of the DB strategist notwithstanding – the bigger problem, and this goes back to our point from last week, is that no matter what the Fed does at this point, its actions will almost certainly precipitate the very recession it hopes to avoid.

Why? The following chart from SocGen answers that question in grandiose simplicity: because it is not the curve flattening that is the recession catalyst – it is sharp curve steepening, whether bull or bear-driven, that precedes the immediate onset of the recession. 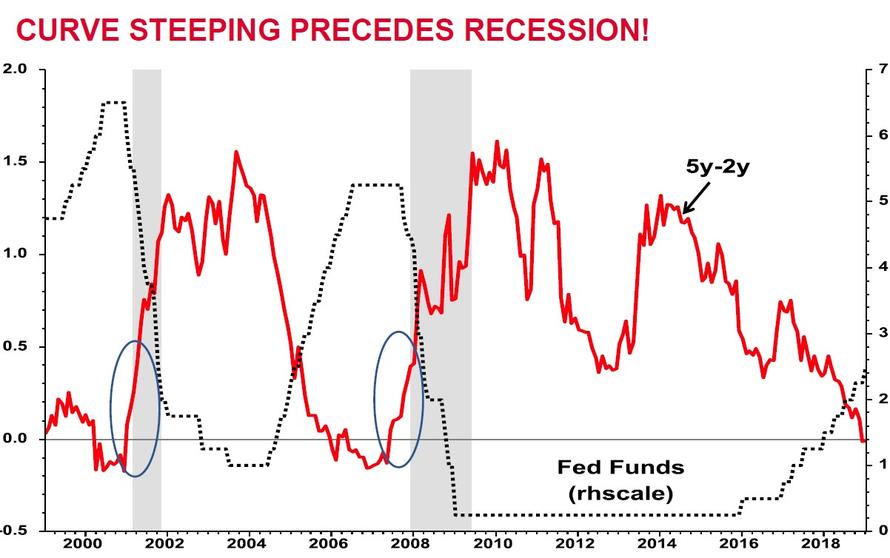 And once the steepener trade finally takes off, Kocic’s variant perception that “recent market dynamics would be consistent with the US economy already being in a recession” would be spot on: at that point, the bond market would finally admit that everything that happened ever since the Fed though it could normalize has been one massive mistake…. just as Ben Bernanke predicted admitted in May 2014, when he said that there would be “no rate normalization during my lifetime.”