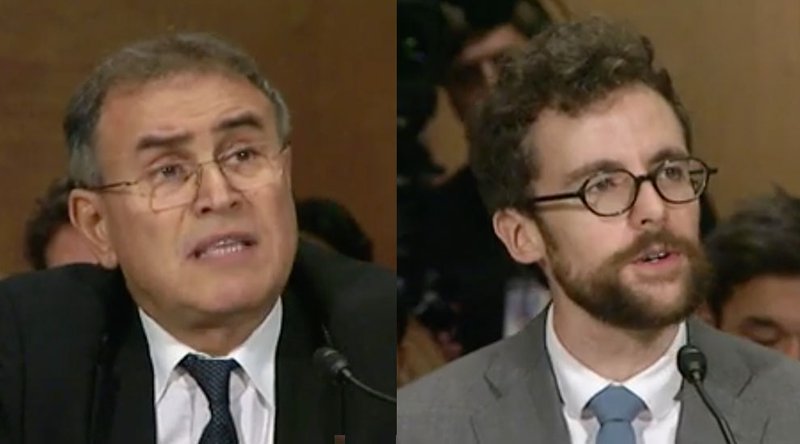 Nouriel Roubini, an economist best known for his predictions of the 2008 housing bubble, and Peter Van Valkenburgh, Coin Center’s director of research, testified before the U.S. Senate Committee on Banking, Housing and Community Affairs in a hearing on cryptocurrency and blockchain on October 11, 2018.

“We need to sort through the static,” said Banking Committee Chair Idaho Republican Mike Crapo, describing a need to better understand both the opportunities and the challenges in cryptoland. The testimony comes at a time when bitcoin has lost two-thirds of its value since the beginning of the year and U.S. regulators are trying to figure out how to regulate thousands of ICOs that have flown in the face of decades old securities laws.

Roubini wasted no time in firing off his salvos. He called crypto the “mother and father of all scams and [now busted] bubbles.” Among his list of other criticisms: blockchain is overhyped; Bitcoin cannot scale and it is not decentralized; only criminals and terrorists use bitcoin; crypto is a libertarian’s dream; and utility tokens will return us to the Stone Age. “Even the Flintstones knew better than crypto — they used clamshells as their own one currency,” he said, in one bewilderingly anachronistic statement.

In stark contrast, Van Valkenburgh hailed bitcoin as “revolutionary” for its ability to function as a payment system without a trusted middleman. He referred to bitcoin’s underlying technology as a “computer science breakthrough” on par with the internet. Pointing to breaches at Equifax, Swift and DYN in the last two years, he called blockchain technology “our best hope” for secure systems.

“It took 20 years for those systems to be friendly enough for consumers to want to use them to send messages,” he said.

Roubini, with his usual gloominess, said no government or bank would want to use a public blockchain, because it was too risky. “The idea of decentralization is never going to fly,” he said.

When asked for examples of how the world was better off with blockchain technology, Van Valkenburgh cited one example: In Afghanistan, a country where men control finances, a woman named Roya Mahboob was able to use bitcoin to pay her female employees.

“I don’t think the world is better off,” Roubini grimaced. He pointed to M-Pesa, a mobile money transfer service that is widely used in Kenya, as an example of a system that has transformed fintech. M-Pesa is centralized and does not use a blockchain. Van Valkenburgh called M-Pesa and WeChat, an app used for mobile payments in China, “tools for totalitarianism” because they allow governments access to user data.

The topic of crime came up several times in the hearing. Van Valkenburgh agreed with one senator’s comments that criminals are often early adopters of a new tech.

“In fact, I think if criminals aren’t using your technology, your technology is not worth anything,” Van Valkenburgh said. Bitcoin was notably used in the Silk Road, a now defunct online dark market. He also made it clear bitcoin transactions are traceable, which is how many Silk Road drug traffickers were caught and brought to justice.

When asked if bitcoin would ever move beyond five transactions per second, Roubini replied proof of work is not, and never will be, scalable.

“We can do a lot more,” Van Valkenburgh said, pointing to the Lighting Network, a layer two payment solution for bitcoin. Coin Center even has an M&M machine that is rigged to the Lightning Network, he said. It allows anyone in the Coin Center office to buy a single M&M with a tiny fraction of bitcoin.

Massachusetts Democratic Senator Elizabeth Warren asked if decentralization was an inherent property of blockchain technology. Sticking to his script, Roubini replied that it was: Due to economies of scale, single entities control a majority of the bitcoin mining. He added that the situation would only become worse with proof of stake, because oligarchs would control the majority of coins in a system.

Senator Warren expressed concern that cryptocurrencies were an easy target for theft and a lot of small investors are being scammed through initial coin offerings. “New technologies create these new opportunities,” she said. “But if we are not careful they can follow the same old patterns — they make the rich richer and leave everyone else behind.”