Is an arms race between enemies Saudi Arabia and Iran on the horizon? Saudi Arabia has been long dependent on the US and UK to import all of its weaponry, however, new satellite images suggest Riyadh has established its first ever ballistic missile factory, according to weapons analysts who spoke to The Washington Post.

Jump-starting a new domestic ballistic missile program has international observers worried this could be a major step towards a future Saudi nuclear program— especially given the Saudis have long worried their Shia rivals across the Persian Gulf are hiding a nuclear program. Though Iran has long advanced its own domestic missile production capabilities, it’s come under intense scrutiny over the past decade, whereas it’s more likely that any Saudi aspirations would draw little attention.

Despite multiple billion dollar weapons deals with the US over the past years, there’s no evidence that Washington has ever sold ballistic missiles to Riyadh over fears it would be “destabilizing for the region”. This has resulted in the Saudis increasingly looking to China and Pakistan for such procurement. Saudi Arabia may further be feeling the heat to acquire its own freedom of production amidst the war in Yemen, which has seen short-range missiles launched by Iran-backed Houthis, in addition to wanting to check the threat of Tehran’s own ballistic missiles and launch tests.

According to The Washington Post the newly constructed Saudi production facility is located near an established missile base in al-Watah, southwest of Riyadh. One leading expert at the Middlebury Institute of International Studies at Monterey, California, which first discovered the satellite evidence for the facility, worried, “The possibility that Saudi Arabia is going to build longer-range missiles and seek nuclear weapons – we imagine that they can’t. But we are maybe underestimating their desire and their capabilities.” 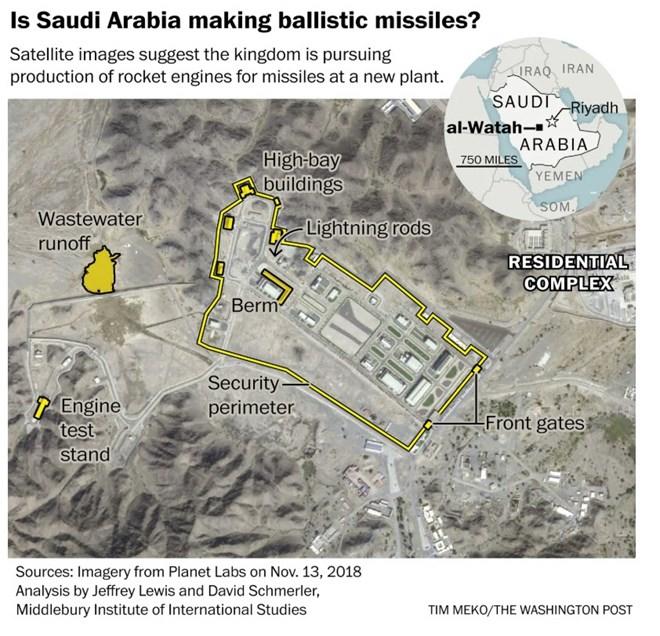 When presented with a report of the satellite imagery, Saudi Arabia refused to comment, as did the CIA and FBI, according to the Post, which further noted it remains unclear the extent of the complex’s production capability and development:

It is unclear from the satellite images whether the facility has been completed or is functionally capable of manufacturing missiles. Regardless, the complex – which satellite images suggest broke ground in 2013 when King Salman was defense minister – highlights the nation’s intention to make its own advanced missiles after years of seeking to purchase them abroad, at times successfully.

Saudi ambitions in domestic ballistic missile production now have a greater chance of bumping up against the international scrutiny that’s spotlighted the kingdom since the killing of Jamal Khashoggi and crown prince MBS falling out of favor with western leaders.

Or this could be precisely the point: given the now rocky and tense relationship with the United States, Riyadh could be signalling readiness achieve greater security independence while entering closer into the Russia-China orbit.

A key line in the Washington Post report on this potential realignment speaks volumes: “How the Saudis obtained the technological expertise necessary to build the facility is unclear. One potential supplier: China.”