The ING International Survey Savings 2019, the eighth in an annual series, surveyed 14,695 people in Europe, the US, and Australia, and discovered the majority worry about not having enough money in retirement. The findings show that many people are “sleepwalking” into a financial crisis with little or no savings toward their golden years.

Half of the retirees in Europe tell ING that their standard of living has dramatically declined due to their underfunded retirement plan. Two in five of those in Europe who have not yet retired say they expect to get less in retirement than they paid into their pension.

And more than half of Europeans who have not yet retired tell ING they expect to work in the gig-economy to continue generating income streams well into their retirement.

The shocker: One in four Europeans had no savings at the end of 2018 when this report was conducted, making it virtually impossible to save towards retirement. Beyond Europe, a similar ratio of non-savers existed in the US and Australia. 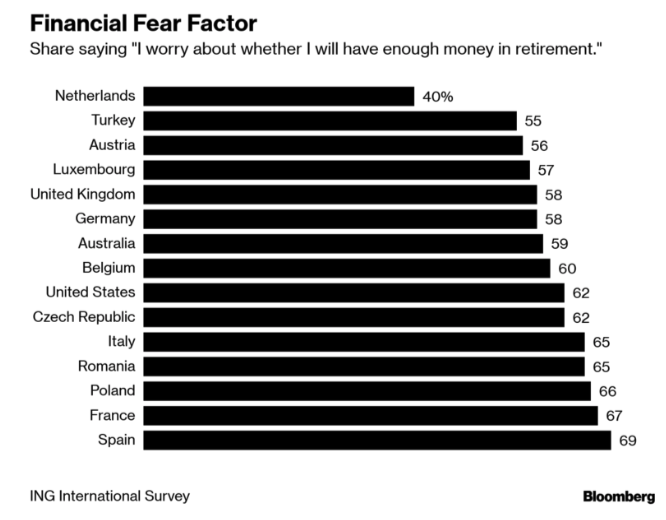 The Bloomberg chart shows the Dutch have the brightest outlook on retirement because they are saving much longer. The average respondent in the Netherland retires around 67 years old. 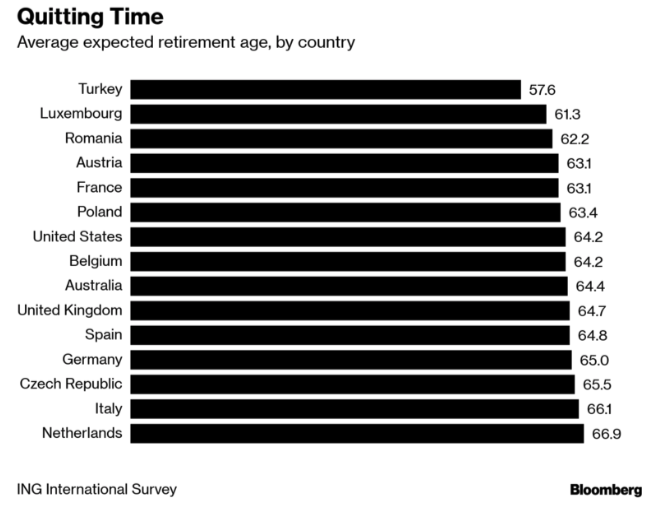 The survey suggested that working longer makes retirement much more comfortable to live.

Bloomberg warns that individuals and governments could have trouble covering costs related to old age, as the demographic apocalypse is upon the Western world. Cutting pensions for seniors can trigger social destabilization for politicians who attempt to reign in costs. And for ordinary people who want to delay retirement, it is challenging to understand if their job will still exist in the next 24 to 48 months, considering the rapid integration of artificial intelligence and automation in the economy.

People’s attitudes toward retirement reflect the economic realities they face in a global economy that is rapidly slowing, headed for a near term trade recession that is going to strain pension funds and government coffers. Take, for example, France, a majority of current retirees say they do not “enjoy the same standard of living they had when working.” In the US, less than one-third of American retirees say their retirement life is economically depressing. 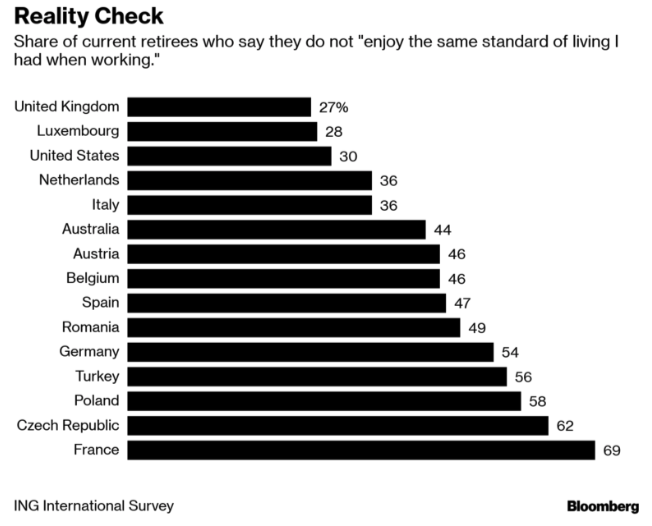 With the expectation of government budget cuts, low saving rates, out of control inequality, and volatile markets, retirement for future generations will be a financial nightmare.