Over the past two months, as the market soared higher from its December lows, it wasn’t just financial conditions that eased dramatically, and in fact to levels where the Fed was hiking (the same Fed that complained about tighter financial conditions as being a driver behind its decision to put rate hikes on pause), inflation expectations have also rebounded and over the past week, we’ve seen US 5Y Breakevens jump from 1.733% (and below 1.50% at the start of the year) to the current 1.814%, the highest print so far this year.

Commenting on this move, Nomura’s Charlie McElligott notes that it is likely due to two development trends: i) the market’s growing acceptance of a “new-and-improved” Fed inflation framework — one which would in-theory help “pump-up” inflation expectations via an “inflation averaging” (or even “targeting”) approach as Bill Dudley hinted at last Friday; and ii) the record credit- and money- data showing the extent of Chinese liquidity-boosting efforts) risk “tipping over” the market’s consensual belief in “the death of inflation.”

So as hints of reflation start to be appreciated by the market, another potential market reversal may be in store: a renewed curve steepening, which would have material consequences across all asset classes.

Laying out his argument why a steeper curve is one of his “core 2019 trading view expressions”, McElligott writes that despite the past month’s “stalling” of curve steepening – with the 2s10s oddly rangebound in the past 3 months between 15 and 20bps, he sees four scenarios which could act as catalysts for a potential “steepening impulse” moving-forward:

The first “steepening” scenario would be a meaningful deterioration in US data, which would then see the market “pull-forward” the Fed CUT priced-into 2020—in turn, the front-end rally would accelerate even further (entire curve would ‘bull-steepen’)

The second scenario would be what several strategists, including Nomura’s George Goncalves, have been discussing, which is the case for the Fed to address adjusting the composition of its balance-sheet in coming meetings via a “Reverse Operation Twist”, where reinvestments would be allocated towards the front-end in order to shorten the weighted average maturity of the portfolio (while still seeing MBS run-off to zero)

An additional benefit of a “Reverse Op Twist”, is that the implicit “steepening” (as the reinvestments into T-bills would then help push front-end yields lower) would also assist the Fed in avoiding the “negative optics” of curve inversions; the steepening too would provide potential “wiggle room” w.r.t. IOER vs effective Fed Funds; the steepening too would “throw a bone” to the health of the banking industry; and ultimately, a steeper curve would then make it easier for the Fed to engage in an EASING via resumption of the original “Operation Twist” down the road to again flatten curves and ease financial conditions in the case of the next crisis–but in a manner that is “sterilized” without the politically sensitive “creating money” discussion

The third scenario includes the newest information inputs regarding potential drivers of a global “reflationary” impulse, and is potentially the highest risk/reward for global markets according to the Nomura strategist: That would be a reflationary mix of 1) record PBoC / China easing-/ stimulus-/ liquidity- pumping (last week’s data showing that Chinese credit growth hit a new record in January, with shadow banking rising for the first time in eleven months, and new Yuan loans jumping by the most of any month in data back to 1992) in conjunction with 2) the introduction of the Fed’s new inflation framework (“trial ballooned” by Dudley comments Friday / Fed inflation focus paper Friday / consultant and strategist ‘trending’ talk etc) which highlights an “inflation averaging” approach, while others have spoken to the potential for “price targeting,” which in-turn would allow inflation to overshoot / run-hot without forcing the Fed to immediately tighten

Finally, a fourth driver for a curve steepening could come from a continuation of recent easing/compression in funding markets— with the front-end chasing LIBOR fixings-, x-ccy basis- and CP rates- lower, which then looks set to extend further “catch-down” in the front-end echo-chamber.

McElligott’s conclusion: a “realization” of this interplay of policy tweaks, mechanical adjustments and a broad CB “pursuit of inflation” message advocates tactical positioning in Steepeners, Breakevens, US Equities Value vs Growth / Cyclicals vs Defensives

Indeed, if one looks below the surface of the market, and specifically the leadership in stocks, Nomura notes that “something is happening”, as in something different, because equity “value” factors are telling a much different story from 2018, where they continuously lagged growth.

This is seen clearly in the next chart, showing the outperformance of Value over Growth over the past week: 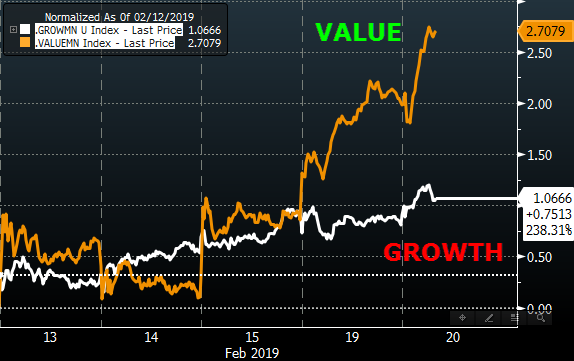 As Charlie writes in, the chart above shows why hedge funds who aren’t there for value (consensually short) / growth (consensually long), are getting killed again: “This is the update to the chart in the email….since I sent it out you’re seeing an extension of the rebalancing with value gapping further while growth continues to fade” 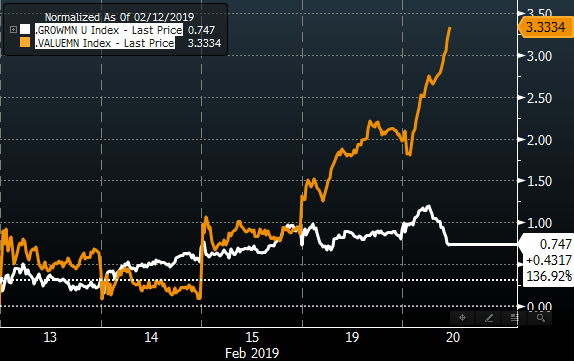 And as he further adds, “Managers don’t understand the impact of curve steepening on their equities books, esp as they’re de facto ‘long growth, long momentum.”

Meanwhile, as we discussed before, when it comes to trend-followers such as CTAs, there is little room for additional upside as virtually every major asset class is now in the “Max Long” bucket: