Update: As analysts try to parse what the summit chaos in Vietnam means for US-China trade talks, Beijing has chimed in to offer some clues of its own.

In a statement that mirrored what President Xi said about a US-China deal, Beijing said the US and North Korea must “meet each other half way” on a nuclear deal.

Meanwhile, some have proposed that the collapse of the summit could strengthen Beijing’s hand in the trade talks, as Trump might feel pressured to go easy on China to try and win a deal with North Korea.

For #China, this could strengthen Beijing’s hand. @realDonaldTrump praised President Xi, calling him a “great” and “respected” leader. Will that mean Trump will go easy on Xi on trade to get more done on North Korea?

Even arm chair observers probably understood long before the Hanoi summit had even been scheduled that the gulf between the American and North Korean positions on denuclearization was probably too wide to overcome (after nearly a year of talks, the two sides are no closer to a deal). Yet, President Trump had apparently hoped that the pomp and circumstance of another historic summit would soften Kim Jong Un up. But despite all the talk about North Korea being “ready to denuclearize” and both leaders hyping up the possibility that a deal would be struck, alas, no deal was forthcoming, and Trump is now headed back to Washington empty handed. 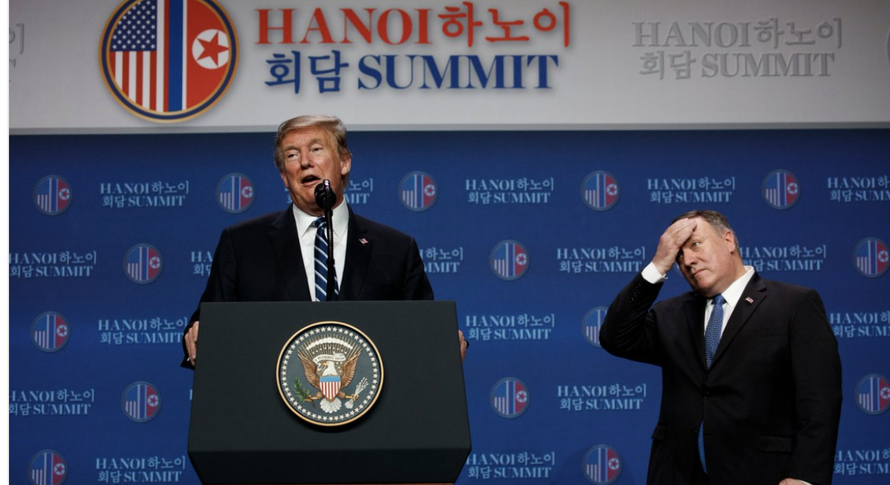 Talks between the two world leaders broke down Thursday afternoon as President Trump abruptly walked away from the table and canceled a planned lunch and signing ceremony (it’s still not clear what the two leaders had hoped to sign, though scheduling the ceremony before a deal had been struck did seem risky). With the talks in disarray, Trump moved up a news conference where he and Secretary of State Mike Pompeo took questions from the press.

Trump told reporters that he had asked Kim to commit to full denuclearization before the US agreed to sanctions relief, and that “he was unprepared to do that.”

“There were several options but this time we decided not to do any of the options. Sometimes you have to walk”

US President Donald Trump on the breakdown of talks with North Korean leader Kim Jong-un in Vietnam#Hanoisummit latest: https://t.co/CbibiArgBi pic.twitter.com/oRdgdjJNtC

Trump told reporters that the talks collapsed after the North refused to yield from its demand that the US completely remove all of the U.S.-led international sanctions – including the sanctions approved by the UN security council –  in exchange for the shuttering of the North’s Yongbyon nuclear facility. Trump and Pompeo refused to make a deal without the North committing to giving up its secretive nuclear facilities outside Yongbyon, as well as its missile and warheads.

According to Trump, the talks ended amicably enough, with a commitment to keep the talks alive, and Kim also promised that he would not resume nuclear and missile tests – the basis for the detente between the two countries – and Trump said he would take Kim at his word.

“There will be no more testing of rockets and nuclear. I trust him and take him at his word”

Trump added that he’d “much rather do it right than do it fast.”

“It was about the sanctions,” Trump said. “Basically, they wanted the sanctions lifted in their entirety, and we couldn’t do that. They were willing to denuke a large portion of the areas that we wanted, but we couldn’t give up all of the sanctions for that.”

“I’d much rather do it right than do it fast,” Trump added, echoing his remarks from earlier in the day, when he insisted that “speed” was not important. “We’re in position to do something very special.”

In a brief digression, Trump offered his take on Michael Cohen’s marathon testimony before the House Oversight Committee, saying he was surprised Cohen didn’t go “100%” and lie about Trump colluding with the Russians (Cohen said he had no evidence of collusion).

“He lied a lot… but he only went about 95% instead of 100” – US President Donald Trump responds to ex-lawyer Michael Cohen’s testimony saying he was “impressed” he said there was no Russia collusionhttps://t.co/CbibiArgBi pic.twitter.com/2Fz9uhOZy3

Trump insisted that, when it comes to the subject of denuclearization, “you always have to be willing to walk.”

In response to a question about Otto Warmbier, the American student who died shortly after being released from a North Korean prison, Trump said he believed Kim didn’t understand what happened to Warmbier until after it had happened.

“I don’t think the top leadership knew about it. Those prisons are rough”

finished off the talks by suggesting that it might be “a long time” before another summit.

“The next meeting might not be for a long time”

Despite the breakdown, the leader of South Korea said that, while it was unfortunate no progress had been made on denuclearization, he planned to offer new proposals for inter-Korean engagement following the high-stakes nuclear summit. Moon’s announcement is planned for a Friday ceremony marking the 100th anniversary of a 1919 Korean uprising against Japanese colonial rule. That ceremony will likely include plans for economic cooperation, according to Fox.

According to Bloomberg, Kim took Trump by surprise with his demand for immediate and full sanctions relief, which is why Trump canceled the signing ceremony scheduled for Thursday, which was – again, according to BBG – supposed to feature an agreement on a jointly acknowledged definition of “denuclearization” – something that had been a sticking point during the talks in Singapore.

The abrupt end to the summit rattled global risk assets, while, in South Korea, stocks dumped while the cost of insuring the sovereign debt of the North’s longtime rival edged higher.

After leaving the summit, Trump tweeted a “thank you” to his hosts in Vietnam.

THANK YOU to our generous hosts in Hanoi this week: President Trong, Prime Minister Phuc, and the wonderful people of Vietnam! pic.twitter.com/AMqF0dfRhP

The upshot, of course, is that Trump’s failure in Hanoi probably doesn’t bode well for a deal with China, as Beijing has clearly not given its blessing for North Korea to proceed. Also, Trump has demonstrated to the markets that he can walk away, even when he so desperately wants a deal, offering some succor to China hawks like Lighthizer.

As one Twitter wit joked, the summit chaos marked the biggest US defeat in Vietnam since…well…

Wow. He even found a way for the US to lose in Vietnam again.

Watch the full press conference below (Trump starts speaking at around the 30-minute mark):