Commenting on the WSJ report and subsequent denials, Calvin Tse, Citi’s North American head of G-10 foreign-exchange strategy, said “we have imperfect information right now, but based on what we know, I do not view this as relevant news,” noting that article says Treasury Secretary faces resistance from Trade Representative

Tse said that “it’s an idea” and not clear whether it’s “realistic right now”, adding that he wouldn’t be selling dollars here.

Update: CNBC’s Eamon Javers reports that a Treasury spokesman has offered this comment on the WSJ report: “Neither Secretary Mnuchin nor Ambassador Lighthizer have made any recommendations to anyone with respect to tariffs or other parts of the negotiation with China” and adds that “this an ongoing process with the Chinese that is nowhere near completion.”

The spokesman adds this: “This an ongoing process with the Chinese that is nowhere near completion.”

And as Bloomberg confirms: TREASURY DENIES TO WSJ ANY CHINA TARIFF RECOMMENDATIONS MADE

In kneejerk response to the denial, the S&P has faded about half of the initial gain but is still about 0.5% higher. 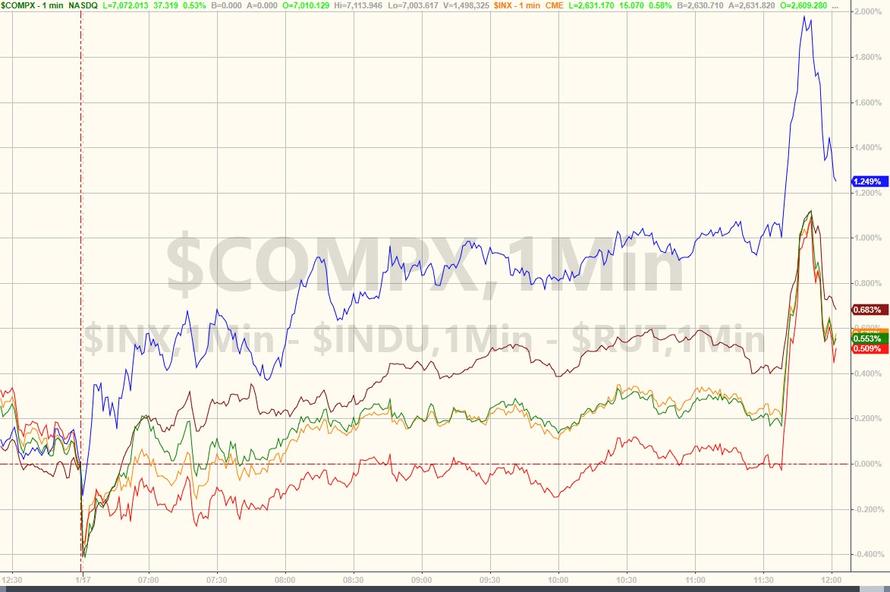 In stark reversal of the market action from the last hour of trading on Wednesday, stocks surged moments ago on a WSJ report that U.S. officials are weighing easing back tariffs on Chinese imports “as a way to calm markets and give Beijing an incentive to make deeper concessions in a trade battle that has rattled global economies.”

That said, nothing is assured as the push for concessions is split within the Trump camp: according to the WSJ, the idea of lifting some or all tariffs was proposed by Treasury Secretary Steven Mnuchin in a series of strategy meetings, with the intention “to advance trade talks and win China’s support for longer-term reforms.” However, Mnuchin is said to face resistance from U.S. Trade Representative Robert Lighthizer, who is concerned that “any concession could be seen as a sign of weakness.”

The debate is occurring as trade officials try to figure out the best way to pry concessions from China. It hasn’t yet reached President Trump, and the outcome of the discussions aren’t possible to forecast.

While in the past, Trump has sided with Lighthizer on tariffs, rather than Mnuchin, this time the president has made clear he wants a deal—and is pressing Lighthizer to deliver one, according to people familiar with the discussions.

While Lighthizer is leading the trade talks, Mr. Mnuchin has been active in formulating the administration’s strategy. In talks with members of the trade team, Mr. Mnuchin raised the possibility of offering to eliminate tariffs during discussions scheduled for Jan. 30 in Washington with top Chinese trade envoy Liu He—a month ahead of the target date to conclude the negotiations.

“It could be an arrow in the quiver” of U.S. negotiators, said one of the people tracking the talks.

It is not clear if Lighthizer will concede: the USTR has repeatedly taken his hard-line in trade talks, contending that China hasn’t lived up to past agreements and can’t be trusted to do so in the future. In the discussions with China, he has said the U.S. should remove tariffs only when China has shown it has carried out promises made during the talks.

But Mr. Lighthizer has shown some signs of easing his position, say people involved in the talks, including raising the possibility that some tariffs could be eliminated if the U.S. strikes a strong deal on March 1. A Treasury spokesman said bargaining positions “are all at the discussion stage” and that  “neither Secretary Mnuchin nor Ambassador Lighthizer have made any recommendations to anyone with respect to tariffs or other parts of the negotiation with China.”

And even as the WSJ notes that talks are “nowhere near completion,” stocks exploded higher on the news, with the Dow surging 1% higher on the day… 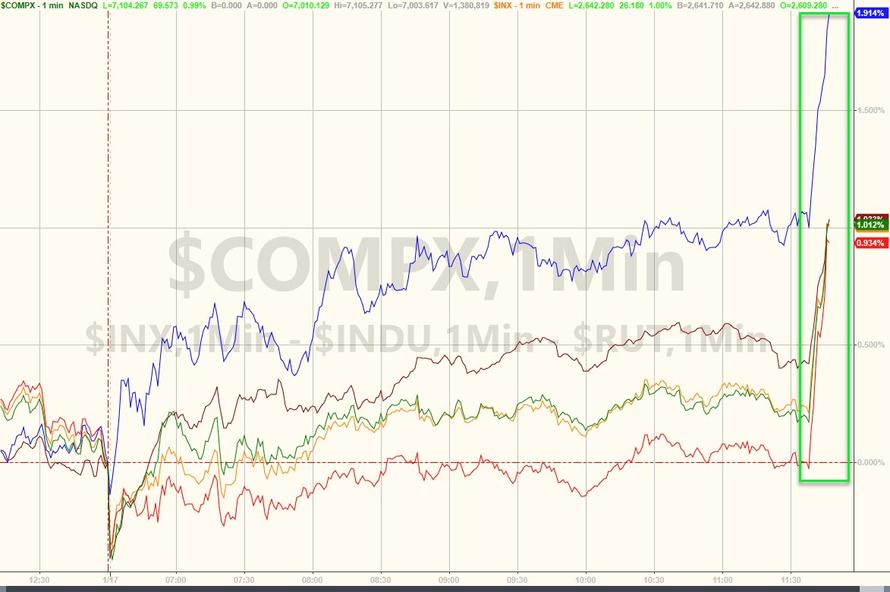 The news also sent the dollar sliding while the Aussie dollar and yuan both spiked on the report. 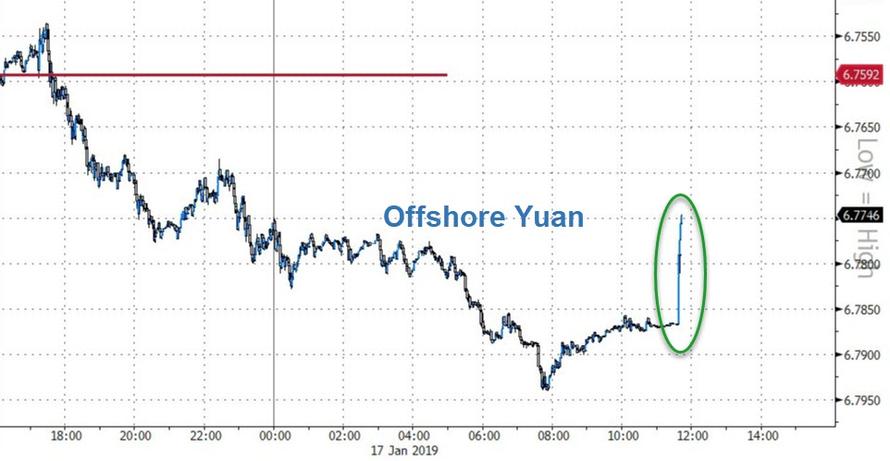