“The Wait is Over” now and Elon Musk’s big mystery announcement is  a cheap Model 3 with a shorter range, almost three years after he started taking orders for the sedan.

In hopes of boosting demand, Tesla will offer a $35,000 version of its Model 3 sedan with a delivery time of two to four weeks, nearly two years after the company originally promised the car at that price. Musk said last month he hoped the lowest price version would be available in mid-2019. Tesla has twice this year lowered the price on the Model 3, which currently starts at $42,900. A U.S. federal tax credit began phasing out for Tesla in January, effectively raising the price of cars by $3,750.

The new $35,000 version has a top speed of 130 miles per hour and can go from zero to 60 mph in 5.6 seconds, Tesla said. For $2,000 more, Tesla offers a version with 240 miles of range and a top speed of 140 mph. Tesla said its sales would now be online-only around the world and it would close many stores. A $35,000 Model 3 is a major shot in the arm for Tesla during a period of major challenges for the Silicon Valley company and could put to rest concerns among some analysts that demand for Tesla’s vehicles might be constrained in 2019.

Besides the Model 3, Tesla is developing a new Model Y SUV for 2020 production, while beginning to build a factory in Shanghai.

The news comes three days after renewed tensions between Musk and U.S. Securities and Exchange Commission. The agency petitioned a judge this week to have Tesla’s CEO found in contempt of an October settlement between the parties. The SEC accuses Musk of having made material statements about production levels on Twitter without first having them vetted internally.

More importantly, on Friday, Tesla is due to repay a $920 million convertible bond. Convertible issues give bondholders the right to trade their debt for equity after shares rise over a certain price. Tesla shares are currently about $40 below the $359.87 conversion price. Tesla had $3.7 billion in cash and cash equivalents at the end of December, and unless the stock price somehow soars $50 in the next 24 hours, Tesla will be $1BN less.

Here is what Tesla announced as part of its big unveil, with everything planned to boost demand:

Those two options are significantly bringing the price of Model 3 down: 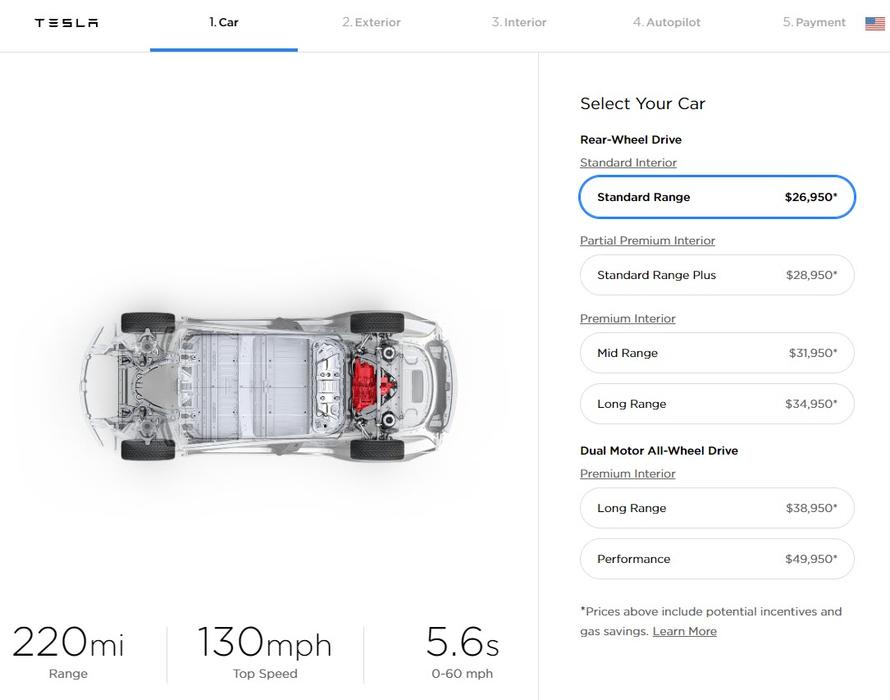 We are incredibly excited to announce that the standard Model 3, with 220 miles of range, a top speed of 130 mph and 0-60 mph acceleration of 5.6 seconds is now available at $35,000! Although lower in cost, it is built to achieve the same perfect 5-star safety rating as the longer-ranged version, which has the lowest probability of injury of any car ever tested by the U.S. Government.

In addition, we are introducing the Model 3 Standard Range Plus, which offers 240 miles of range, a top speed of 140 mph, 0-60 mph acceleration of just 5.3 seconds and most premium interior features at $37,000 before incentives. For 6% more money, you get 9% more range, more power, and an upgraded interior.

To achieve these prices while remaining financially sustainable, Tesla is shifting sales worldwide to online only. You can now buy a Tesla in North America via your phone in about 1 minute, and that capability will soon be extended worldwide. We are also making it much easier to try out and return a Tesla, so that a test drive prior to purchase isn’t needed. You can now return a car within 7 days or 1,000 miles for a full refund. Quite literally, you could buy a Tesla, drive several hundred miles for a weekend road trip with friends and then return it for free. With the highest consumer satisfaction score of any car on the road, we are confident you will want to keep your Model 3.

Shifting all sales online, combined with other ongoing cost efficiencies, will enable us to lower all vehicle prices by about 6% on average, allowing us to achieve the $35,000 Model 3 price point earlier than we expected. Over the next few months, we will be winding down many of our stores, with a small number of stores in high-traffic locations remaining as galleries, showcases and Tesla information centers. The important thing for customers in the United States to understand is that, with online sales, anyone in any state can quickly and easily buy a Tesla.

At the same time, we will be increasing our investment in the Tesla service system, with the goal of same-day, if not same-hour service, and with most service done by us coming to you, rather than you coming to us. Moreover, we guarantee service availability anywhere in any countries in which we operate.

We’re also excited to announce that we’re implementing a number of firmware upgrades for both new and existing customers. These upgrades will increase the range of the Long Range Rear-Wheel Drive Model 3 to 325 miles, increase the top speed of Model 3 Performance to 162 mph, and add an average of approximately 5% peak power to all Model 3 vehicles. 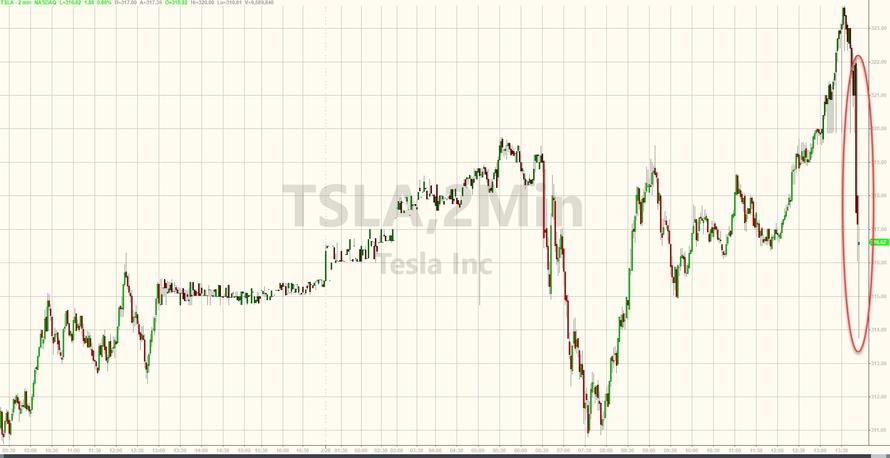 … however TSLA is now halted for the actual news release.